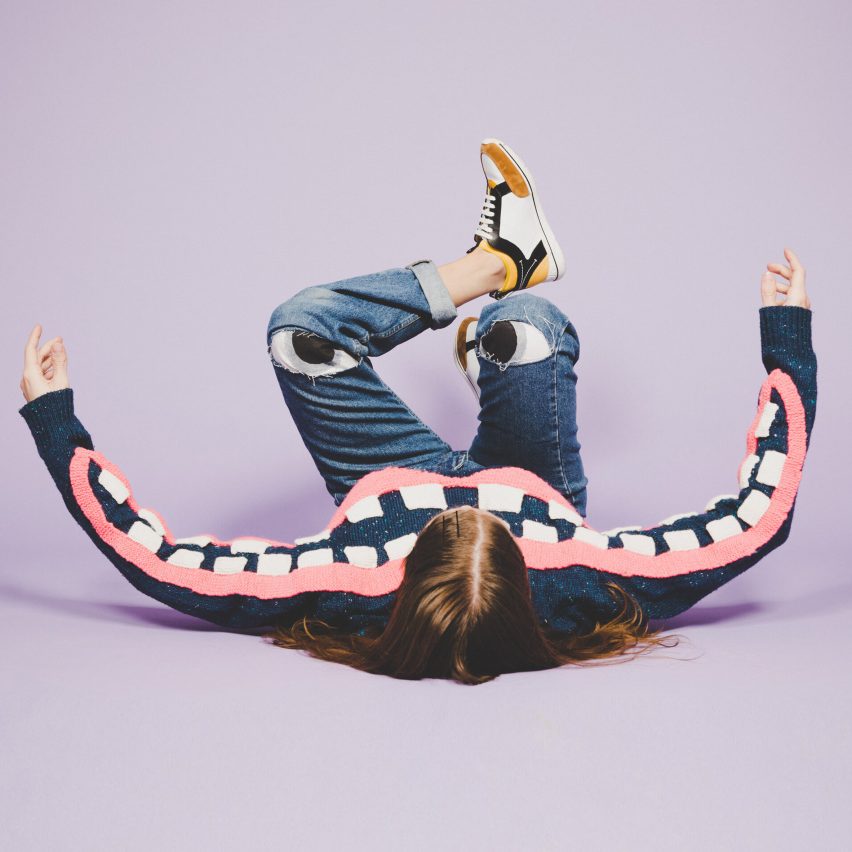 Textile designer Ýrúrarí, who is nominated for this year’s Icelandic Design Award, gives new life to worn-out clothes by adding playful knitted details such as eyes, tongues and fingers.

The Icelandic designer, whose real name is Ýr Jóhannsdóttir, likes to give character to sweaters and other garments which are old or broken and would otherwise have been thrown away.

This often involves adding cartoon-style facial features and other body parts, although she sometimes includes food references or pattern details.

“I give them a strong character to make them more memorable,” she told Dezeen.

Ýrúrarí is nominated for the Icelandic Design Award 2020 with her latest series of designs, Sweater Sauce, which she presented at the 2020 edition of Reykjavík design festival DesignMarch.

The project saw her transform clothing items that had been donated to the Red Cross, many of which were covered in stains.

This became the inspiration for the designs – Ýrúrarí imagined they had been soiled by Iceland’s popular fast food, the hotdog.

“I just thought, it must be people eating hotdogs and then, maybe because of the wind, they spill sauce over themselves and ruin their sweaters,” explained the designer.

“That’s where the theme for the project came from,” she said, “so there are some hotdog thoughts in all of the pieces.”

The designer recreated some elements of the hotdog, adding colourful squirtings of sauce and sleeves covered in sausages.

She then imagined the faces eating these hotdogs, which led her to create wide eyes and open mouths.

There’s an element of humour in each design and many were created with movement in mind. One outfit features a face that only makes sense upside-down; another shows a pair of hands and arms that look like bread rolls topped with mustard and ketchup.

Ýrúrarí has been knitting since she was a child, but it wasn’t until she started studying textile design, first at Reykjavík School of Visual Arts and then at Glasgow School of Art, that she started to take her clothing designs seriously.

To earn extra cash, she would create playful sweater designs and sell them to other students. But in 2015 she created a design covered in protruding tongues, which ended up becoming an Instagram sensation.

The design was so popular that Ýrúrarí was unable to meet demand – instead, she ended producing a step-by-step guide, so that could people could create their own tongues to customise their clothes.

The project led to collaborations and commissions with celebrities including musicians Erykah Badu, Tierra Whack and Hljómsveitt, artist Sheidlina and comedian Noel Fielding. So when she graduated, she decided to make this side project her priority.

The choice to use second-hand clothes was initially fuelled by time pressures – it was much faster than making new pieces from scratch each time. But as time went on, Ýrúrarí started to appreciate the sustainability benefits of upcycling.

“I liked being able to give value to things that would otherwise end up in the trash,” she said.

She has also experimented with face masks, as a creative response to the Covid-19 pandemic. Featuring the knitted tongues that have now become her signature, Ýrúrarí’s masks create unusual expressions on the face of the wearer.

Ýrúrarí will find out this evening whether she has won this year’s Icelandic Design Award. The other nominees are architects Studio Granda, for the conversation of an old farm, and Unnur Valdís Kristjánsdóttir, who has designed a floating relaxation device.

Her work is also on show at the Museum of Design and Applied Art in Reykjavík, where she is currently the designer-in-residence.

As part of this residency, Ýrúrarí is hosting workshops so that others can learn the techniques for themselves. Her goal is to encourage other people to learn the same enthusiasm for knitting that she has.

“I don’t get the same rush from selling something as I do through communicating with people,” she added. “That’s always more fun.”

The post Ýrúrarí uses knitted body parts to give clothes a character of their own appeared first on Dezeen.