“The most important thing is to increase green spaces” says commenter 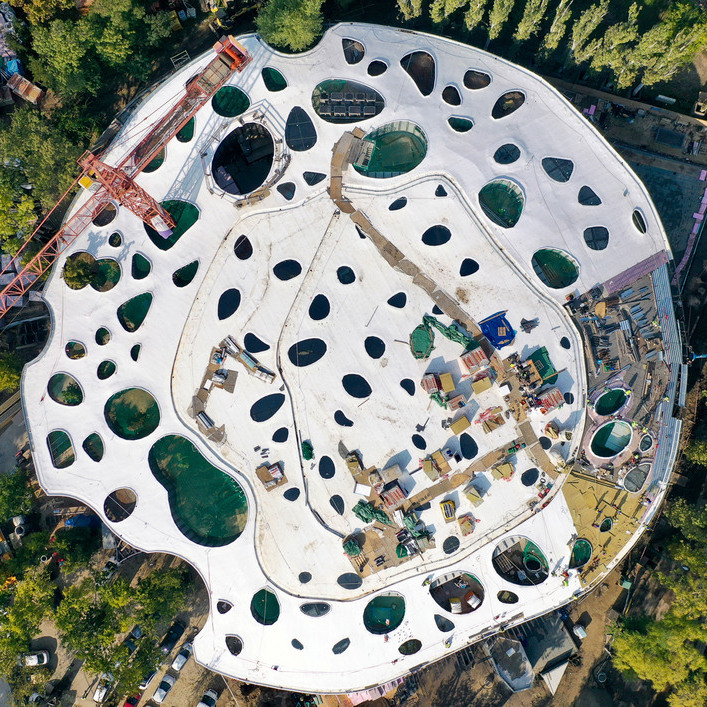 In this week’s comments update, readers are discussing the House of Hungarian Music museum by Sou Fujimoto and sharing their views on other top stories.

A museum dedicated to music topped with an undulating roof that will be punctuated by trees is nearing completion in Budapest’s City Park.

Designed by Fujimoto, the House of Hungarian Music will contain a range of interactive exhibitions on musical history as well as venues for hosting concerts, a library and offices.

The building is being created as part of the Liget Budapest Project, which will see several museums put up within the Hungarian capital’s 200-year old central City Park.

Readers aren’t convinced. “That roof looks like pancake batter just starting to bubble up on a hot griddle,” said Benny.

Jim agreed: “Looks like a poppadom from the top and not a particularly appealing one.”

“In Budapest the air is very polluted and therefore the most important things are to increase trees and green spaces,” continued Barányi György. “I am afraid this project and this building kills the trees, kills the animals and takes from the residents of Budapest who come to relax and do sports.”

“Interesting that there are no human level photos taken from ground level, no views of any entrance or surroundings,” concluded Clichy. “Instead overhead, presumably drone, shots of the roof which will never be seen from that angle. A trite scheme, fortunately well away from the delights of the city of Budapest.”

Are commenters being harsh? Join the discussion ›

“You know you don’t have to publish every brain fart this man lets out?” continued Sim.

Chris Becket was more cheery: “Though simply not impressive, I’m impressed by the simple fun of it all.”

What do you think of Abloh’s designs? Join the discussion ›

Readers are divided over a mirrored holiday home in Mexico, which architect Prashant Ashoka designed to be self-sufficient and in harmony with its surroundings.

“Fantastic,” praised Lane Lege. “Environment-enhancing front exterior, the back yard looks like an oasis, uplifting views of pure vistas and the interior design is also very special! A welcoming retreat for free spirits and young lovers. I think you have an award-winning project here for ‘cool modern sustainability’.”

Erich Trumpelstiltskin was less keen: “I wonder if any birds collided with this house.”

“They’ll have to buy Windex by the barrel,” concluded Egad.

Would you like to stay in Casa Etérea? Join the discussion ›

Commenters are impressed by a cedar-clad home in Salt Lake City that was designed by American architects Kipp Edick and Joe Sadoski for a ski coach.

“I love this house,” said Gnarmite. “It’s stark but somehow still cosy. I bet when the skylights are covered by snow in the winter, the effect is really soft and pleasing.”

“The shadows from the courtyard draping across the hallway – what a lovely way to bring the outdoors inside,” concluded Design Geek.

Are you a fan of Host House? Join the discussion ›

The post "The most important thing is to increase green spaces" says commenter appeared first on Dezeen.