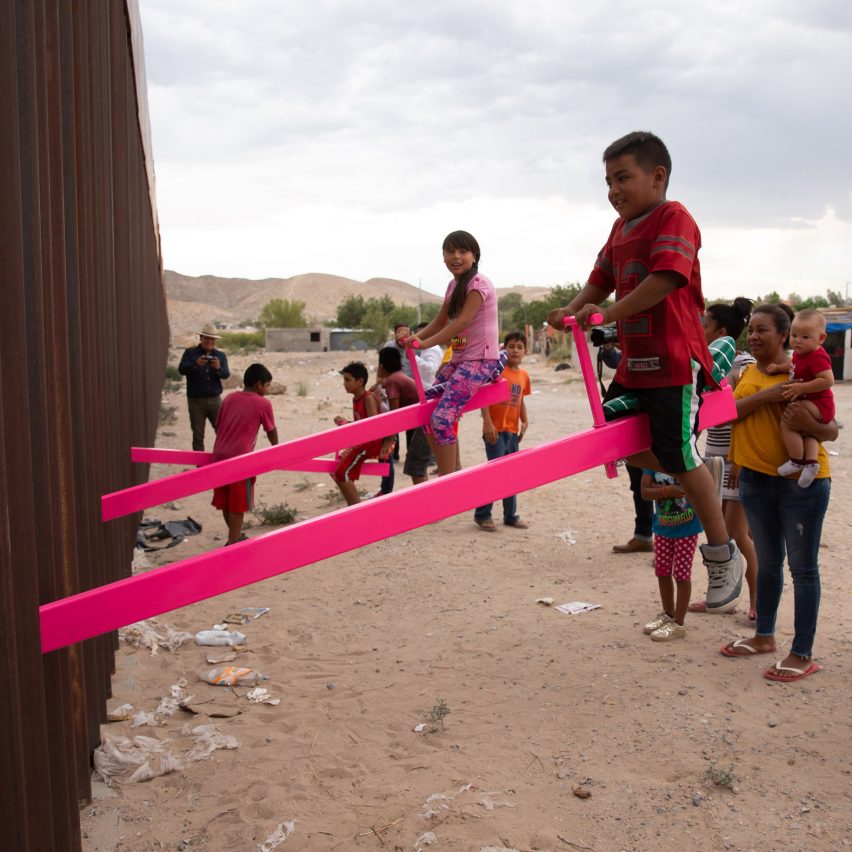 This week on Dezeen, an installation of three pink seesaws that allow children to play across the border won the Design Museum’s Design of the Year award.

Named the Teeter-Totter Wall, the pink seesaws were designed by architecture studio Rael San Fratello to connect children on both sides of the border wall.

“We are living in a time when people are longing for meaningful connections and we would like to think the teeter-totter can be an example for how we come together, to create balance and equality,” Virginia San Fratello told Dezeen.

The award was announced in the same week that Donald Trump, who highly politicised the border wall, left office and Joe Biden was sworn in as US president.

In Saudi Arabia, crown prince Mohammed bin Salman unveiled plans for a 100-mile long city that will have no cars or streets.

In response to the design, a commenter wrote “only a train would think that’s a cool city layout”.

In architecture news, photos revealed Sou Fujimoto’s museum dedicated to music, which is topped with an undulating roof that will be punctuated by trees, nearing completion in Budapest.

David Chipperfield Architects revealed its plans to revamp the Grand Hotel apartment block in the Belgium seaside resort of Nieuwpoort, while Baca unveiled its design for an Australian marine observatory that will resemble a whale emerging from the water.

Interior designer and broadcaster Michelle Ogundehin wrote her interior design anti-trends report for 2021 in which she reflected on the impact of coronavirus over the past year and predicted that designers will be bold in 2021.

“Discomfort begets the new comfort,” she said. “This is the year for the interiors equivalent of speaking your own truth. To be braver, bolder and create your own interiors narrative.”

Continuing our series of pieces providing visual inspiration for the home we rounded up 10 living rooms with calm, relaxing interiors. Previous articles in the series showcased peaceful bedrooms and domestic bathrooms designed by architects.

With many people still working from home, we also rounded up 10 ten chairs and desks from Dezeen Showroom to improve your home-office setup.

Popular projects this week include a monolithic concrete extension to a Victorian townhouse in Dublin, a group of minimalist micro-apartments in Seoul and a brick house in a Swedish forest.

The post This week a pink seesaw installation on the US-Mexico border was named Design of the Year appeared first on Dezeen.