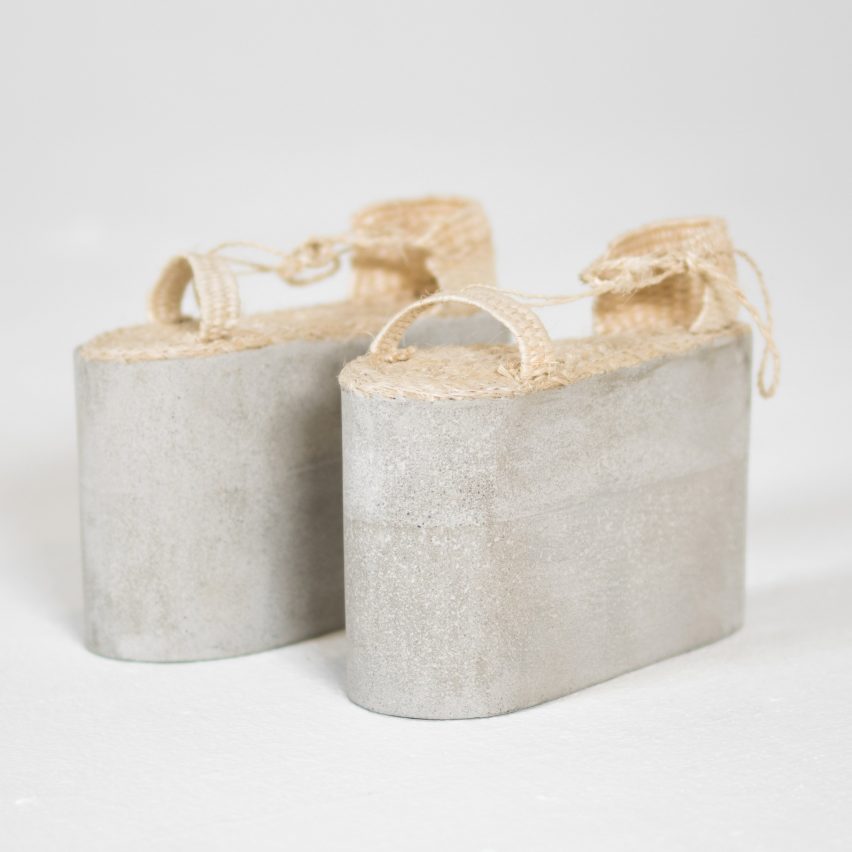 Mexican designer Gerardo Osio has created Raíz Noreste, a collection of objects including concrete sandals that combine traditional and modern materials to make a statement about the history of northeast Mexico.

Named Raíz Noreste, which translates as northeast root, the series of designs investigates the native past of what is now considered to be the most Americanised part of the country.

Each individual piece in the collection is a reinterpretation of a traditional object, remade to reflect how northeast Mexico transformed from a region populated by native hunter-gatherers to an industrial hub.

“The objects are intervened or ‘disrupted’ with materials that correspond to today’s industry in the northeastern area.” Gerardo Osio told Dezeen.

For example, Sedentarismo, which translates as sedentary lifestyle, is a pair of sandals made of ixtle – a natural fibre commonly used by hunter-gatherers. The sandals are reheeled in concrete.

This comparison highlights not only the stark difference in materials used between hunter-gatherers and their modern-day counterparts but also emphasises how agriculture and industrialisation diminished traditional northeastern cultures.

“The disruptions in the objects are the representation of events that changed how people have subsisted in this environment,” he continued.

Each object in Osio’s series explores what he calls “actions” that inhibited a hunter-gatherer lifestyle. For Sedentarismo, Osio explores immobilisation.

Modern technology meant that hunter-gatherers could no longer move nomadically through their native landscape. Osio’s application of heavy concrete to the sandals is a visual metaphor for this.

The designer describes his collection of objects as “a way of making connections within the northeastern territory, its history and materiality in order to understand and question the identity of its locality.”

Cercamiento, meaning enclosure, is a group of jícara bowls, which were traditional food and water containers of hunter-gatherers.

The bowls are divided by glass panels. On one side, they are filled with local food collected in the north-eastern region. On the other side, they are empty.

This is designed to be a clear representation of the enclosure of land by colonisers that led to reduced food sources for the hunter-gatherers. The action Osio explores here is division.

“Cities built around industrial developments often share the same problems,” explained Osio. “Pollution and environmental decline, as well as gentrification, social stratification and identities that are no longer connected to their territory.”

Extermino, which translates as extermination – the action it explores – is a bag made of deerskin. Traditionally, the deer was a spiritual guide and represented abundance.

It is punctured with holes intended to represent conflict in the northeastern territory.

The bag hangs from a steel pedestal, and iron pellets sit beneath it. Iron ore is the raw material for the production of steel products, which continue to play a large role in industrialised northeast Mexico.

“Looking at the history of a place and understanding how certain events led us to be and to behave the way we do can make us ask ourselves, ‘how could we do it differently?'” Osio continued.

Individualismo, meaning individualism, is a set of ambiguous objects made of traditional silex and modern plaster. The pieces represent the breakdown of community within hunter-gatherer groups.

Industrialisation threatened both the collective spirit of native people and also artisanal methods of production that they used to make things that they needed. Individualismo is a reminder of this commercialisation.

The Raíz Noreste collection is united by a single theme. The collection considers historical events that transformed northeast Mexico’s traditional cultural landscape – and the materials and processes that shaped those events.

Northeast Mexico’s industrialisation developed in the late 19th century with the discovery of natural materials such as petroleum, and the integration of railroad travel.

Osio intends for Raíz Noreste to ask a series of questions. He wonders, “what can we learn from the knowledge that was developed by people that lived for thousands of years in a specific location? How did they thrive? And what lessons could lead us to more conscious ways of living within a territory?”

In October 2020, Exhibit Columbus concluded its New Middles symposium by broadcasting a live conversation on Dezeen which explored the past and future of North America’s Midwest landscapes and indigenous design.

Gerardo Osio is a Mexican designer from Monterrey whose work has been shown at Milan design week and Design Week Mexico.

Place and identity are common themes in Osio’s work. The Nomadic Life is a range of mobile homeware designed to give nomadic people a sense of belonging. Osio is currently studying for a master’s degree in Geo-Design at Design Academy Eindhoven.

Photography is by Jorge G Balleza.