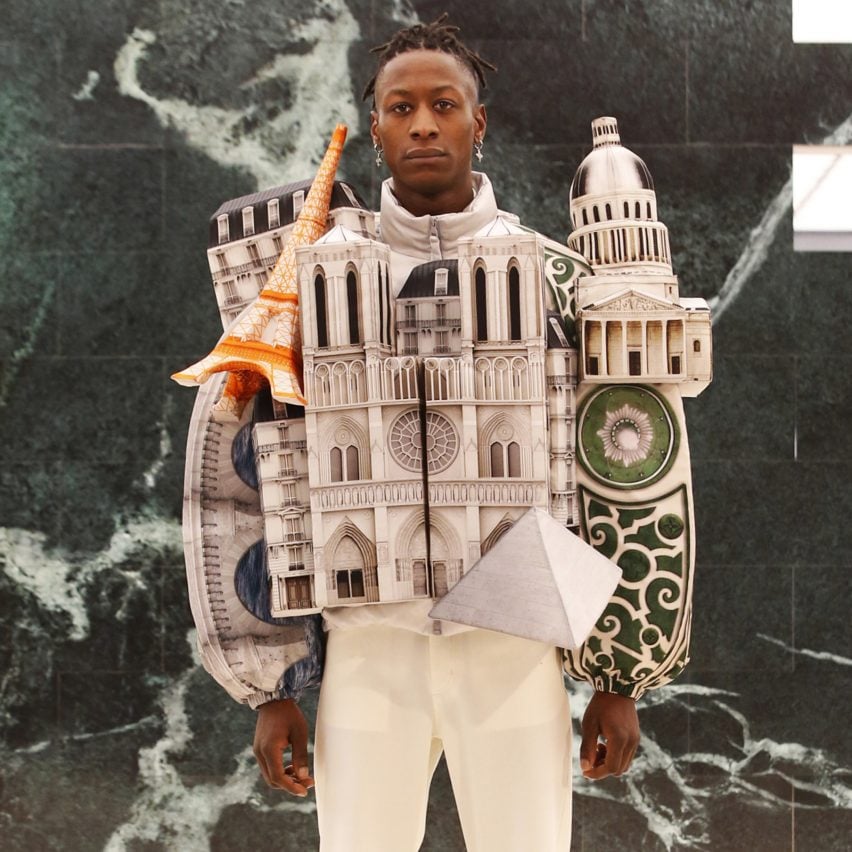 Fashion designer Virgil Abloh has made puffer jackets covered in Paris landmarks and well-known skyscrapers as part of the Louis Vuitton Fall-Winter menswear collection, which debuted in a Barcelona Pavilion-informed set.

The collection designed by Abloh, who has been men’s artistic director at fashion house Louis Vuitton since 2018, was debuted yesterday as part of Paris Fashion week in a crowd-free performance due to coronavirus restrictions.

A film of the show features American rapper and actor Saul Williams walking through an abstract city made of green marble, where he interacts with models wearing items from the collection.

In one scene Williams enters a large room where two models stand on plinths dressed in puffer jackets covered in 3D models of buildings.

Reflecting the fact that the physical show took place in Paris where Abloh lives, one model was wearing a piece called the Paris skyline puffer jacket, which was adorned with models of the city’s best-known buildings.

The jacket has the Notre-Dame cathedral on its front along with models of other historic buildings, including a red version of the Eiffel Tower, the Arch de Triumph and the Panthéon.

Informed by Chicago, where Abloh studied architecture before becoming a fashion designer, the second model was wearing a jacket wrapped in 3D models of skyscrapers. Although the skyscrapers appear to be from multiple cities, the piece is named New York City skyline puffer jacket in the show notes.

Among the most recognisable buildings in the piece are the John Hancock Center in Chicago by SOM and the Bank of China skyscraper in Hong Kong by Pei.

Abloh studied architecture at the Illinois Institute of Technology in Chicago where modernist architect Ludwig Mies van der Rohe was head of the department of architecture in the 1940s and 50s and built the Crown Hall.

The emerald green marble set used for the show recalls the material used by Mies van der Rohe and Lilly Reich at the Barcelona Pavilion, and several Barcelona chairs, which were designed by the pair, can be seen in the show.

“The building’s material constructions and combinations informed aspects of the set created for the Fall-Winter 2021 presentation. ‘Mies is my other Michael Jordan’,” wrote Abloh in the show notes.

Alongside his role at Louis Vuitton, Abloh head up fashion brand Off-White. He has previously created an Off-White streetwear collection for the Musée du Louvre and doormats, umbrellas and slippers for the Off-White HOME collection.

He recently collaborated with AMO director Samir Bantal to design the Off-White flagship store in Miami and opened the brand’s first store in Milan.

Speaking to Dezeen last year, Abloh said that he started his fashion brand to do architecture.

Fronda table and upholstered seating by Industrial Facility for Mattiazzi