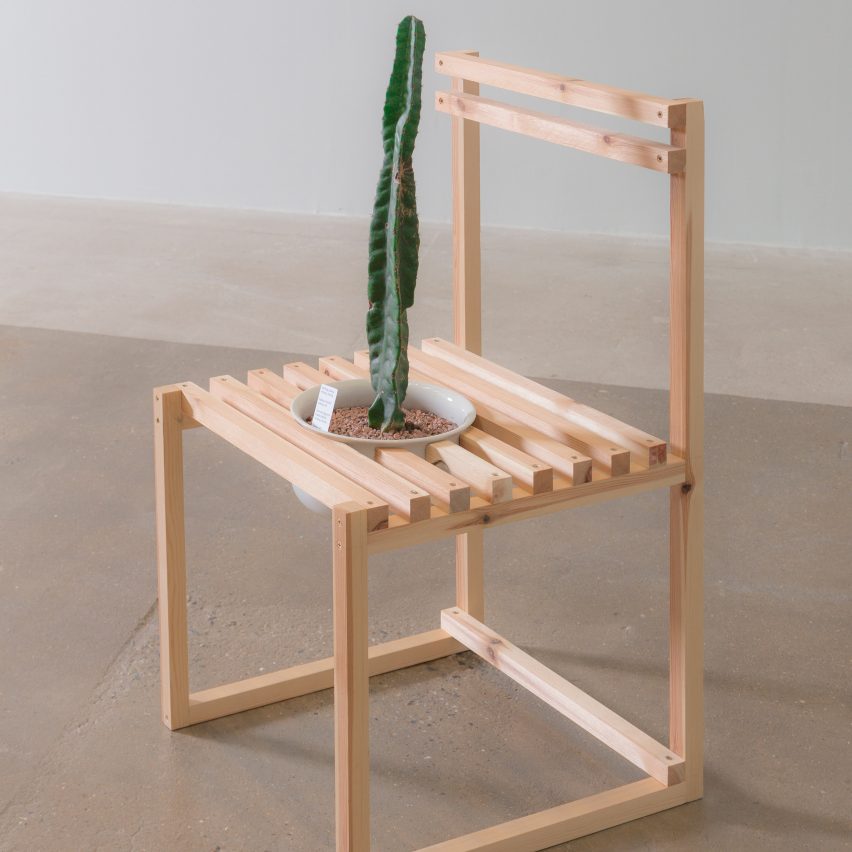 London designers Tom Dixon and Es Devlin and provocateur Max Siedentopf are among 19 makers and artists who have reimagined a simple wooden chair as part of the 19 Chairs charity project.

Organised by London designers Tom and Will Butterfield, the project began during the coronavirus lockdown last spring when the two brothers created 19 different versions of the “gloriously common furniture piece” using only 27-by 27-millimetre square section timber and wood screws.

In phase two of the project these chairs were sent off to be adapted by creatives from different disciplines around the world, with each receiving a different seat. The resulting designs will be auctioned off to raise money for Age UK, a charity dedicated to helping the elderly.

“We asked them to reinvent, reimagine or redesign their chair with an older person in mind,” Tom Butterfield told Dezeen.

“The brief was a nod to the outstanding work of Age UK, connecting our collaborators with those experiencing the isolating effects of the pandemic most deeply.”

Some participants took the brief quite literally, with photographer Henry Gorse cladding his chair in Werther’s Original sweets, which for many Brits are associated with visits to their grandparents.

He used the caramel’s golden-brown wrappers to cover the frame and glued rows and rows of the actual candy along the seat and backrest to create a textured finish reminiscent of a wood-beaded car seat cover.

Similarly, New York designer Nicole McLaughlin, who became popular on Instagram for her unlikely upcycling projects, used old, rolled-up newspapers and foam inserts to pad out the seat, while clear storage pouches slung over the armrests accommodate crossword puzzles and a magnifying glass to “exercise the mind”.

Rather than tailoring his chair to a generic idea of an older person and their preferences, Dixon adapted his for one particular person – retired astronaut Buzz Aldrin.

“He added panels to the backrest and arms before covering the chair in tin foil and aluminium foil tape,” said Will Butterfield. “Taking inspiration from Apollo 12’s Lunar Module Intrepid, the foil wrapping becomes immediately recognisable.”

Dutch artist Helmut Smits turned a single chair into two walking sticks to encourage regular exercise, while London-based Harry Grundy embedded a cactus into the seat for a similar effect.

Others focused instead on improving the comfort of the wooden chairs, with Sabine Marcelis wrapping the seat and backrest in translucent rubber sleeves and British fashion designer Ashley Williams creating a series of upholstered panels using the same patchwork technique she usually incorporates into her dresses.

Installation design studio Isabel + Helen built an entire cocooning machine and placed the chair on a revolving platform at its centre, allowing it to be slowly encapsulated in yarn with each revolution.

“The chair’s skeleton becomes encased within the machine’s tightly woven web, creating a soft outer shell for the angular chair,” the duo explained.

A number of participants took a more abstract approach, taking the chairs apart and using them to form entirely different items.

Es Devlin transformed her two-seater into a revolving lamp, betraying her longstanding fascination with light and movement, while Siedentopf simply sent the Butterfields back a plant in a terracotta pot instead of the chair, suggesting he had turned it back into a “younger and rebellious version of itself”.

Joe Lycett, a British comedian and artist, completely disassembled his seating design and wrote tongue-in-cheek, IKEA-style instructions for the new owner on how it can be rebuilt, including such directives as “insert nail into hole one carefully and kindly and with grace” and “call Alan to tell him you have his Alan key”.

Another cohort of designers simply made over the chair in their hallmark style, with Morag Myerscough using ripstop fabric and acrylic paint to transform hers into an explosion of colour.

Chicago-based Benjamin Edgar redesigned his chair to act more as a “portrait of a moment in time”, reconfiguring its slatted seat to droop down as if exhausted but colouring it in a “brilliantly optimistic blue”.

Pandemic-permitting, the 19 Chairs project is set to be exhibited at London’s Protein Studios in April, while a parallel online charity auction – for which the Butterfields are still seeking sponsors – will raise funds for Age UK as well as the Resourcing Racial Justice fund.

At the end of last year, Los Angeles gallery Marta recruited a slew of designers including Marcelis and Martino Gamper, to reimagine another common household item – the humble toilet roll holder.

The aim was to help people become more conscious of using toilet paper and its considerable environmental impact.

Photography is by Alecio Ferrari.