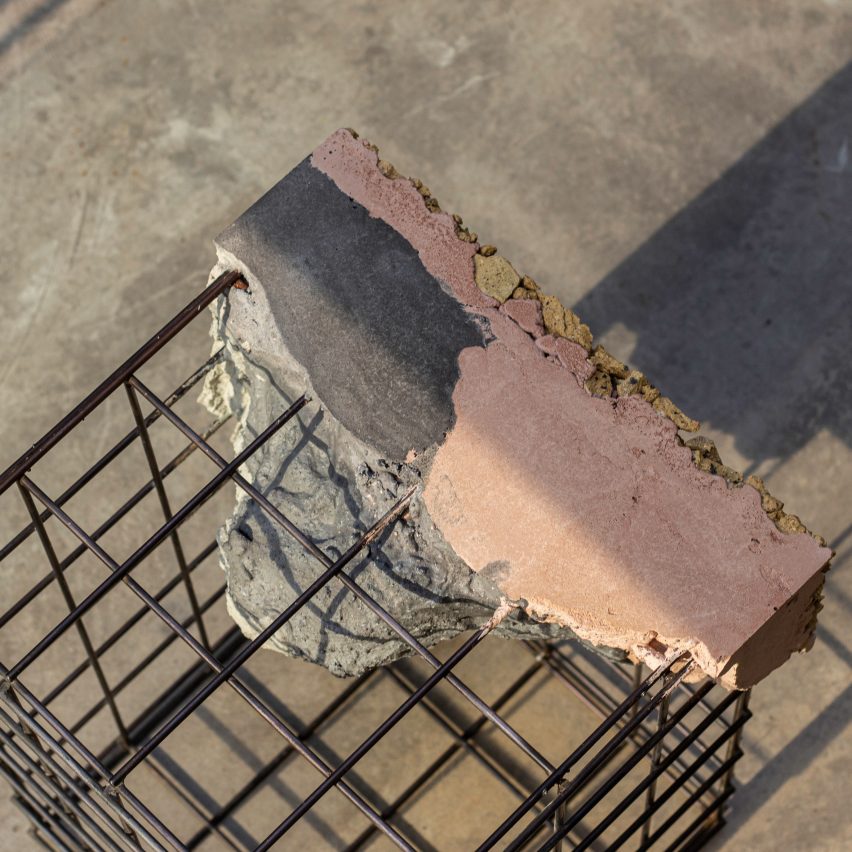 Central Saint Martins graduate Irene Roca Moracia has created a collection of modular furniture using discarded building materials, as a way of critiquing the wastefulness of the construction industry.

The system, called Appropriating the Grid, consists of 11 building blocks that can be combined and joined with metal clips to serve a range of different functions, from seating to storage.

To create the units, surplus reinforcement mesh is welded and cold patinated by hand to form a frame, which is then topped with different types of cement and sand that were thrown away because their packaging had torn while being transported to the site.

This layer is internally reinforced through insulation panels that were broken or water damaged in transit and coloured using fractured bricks, which were powdered to create a pigment.

According to Moracia, these construction materials had to be discarded by the supplier even though they were completely unused because they no longer conformed with the European Union’s Construction Products Regulation (CPR).

“A lot of our construction materials come in packages. They all follow standard safety regulations and their quality is checked according to the European rules,” she told Dezeen.

“But a percentage of those packages or materials gets broken on their way to the site. If this happens, the merchant can no longer sell the material because the quality has been compromised and it gets classified as construction waste.”

According to the EU, the building sector is responsible for its largest waste stream, accounting for more than 35 per cent of all waste generated in the region.

But this “rubbish” cannot be discarded along with the rest, as it could contain hazardous materials. And as part of her two-year research project, Moracia found that most construction companies and suppliers do not have a recycling system in place for these materials either.

“What happens at most of the suppliers I visited is that they have their own waste container that gets collected once a week,” she said. “But when you research what happens to those materials, you’ll find that they just get piled up in the countryside somewhere.”

This, she says, is because in order to be reused the materials would once again need to pass the EU’s testing procedures and attain a CE marking, validating that they conform to the union’s safety, health and environmental protection requirements and can be traded freely on the single market.

This is a monetary investment that many companies aren’t willing to make, according to Moracia. And theoretically, she wasn’t even allowed to use the materials herself since they are classed as building waste and require a licence or permit to collect.

“Most of the materials were provided by a local supply company through technically illegal verbal agreements,” she admitted.

The aim of the exercise is to draw attention to the inflexibility of European regulations and the importance of overhauling these to achieve true sustainability.

“What I tried to show with my project is that sustainability in any context is not merely a matter of architectural design and technology but operations and behaviours,” she explained.

“We can keep improving the way we produce materials or building systems but if we don’t change the way we consume those materials, we won’t achieve sustainability in the construction world.

“We need to cut down the number of resources that are wasted and find opportunities for them to be used,” she continued.

“We have already polluted the Earth to produce these materials, we can not allow ourselves to leave them in a pile in the countryside and forget about them while we keep producing new ones.”

A number of start-ups and design studios have developed sustainable alternatives to traditional construction materials in recent months by repurposing the waste streams of other industries – from a concrete substitute made of discarded seafood shells to cladding formed from cellulose fibres that were leftover from paper production.

Architects have also started incorporating reclaimed materials into their structures, with STC Arquitectos designing a cabin in Argentina from scrap metal and old oil pipes while construction company Buildsense reused materials from a dismantled North Carolina home to erect a new house on the same plot.