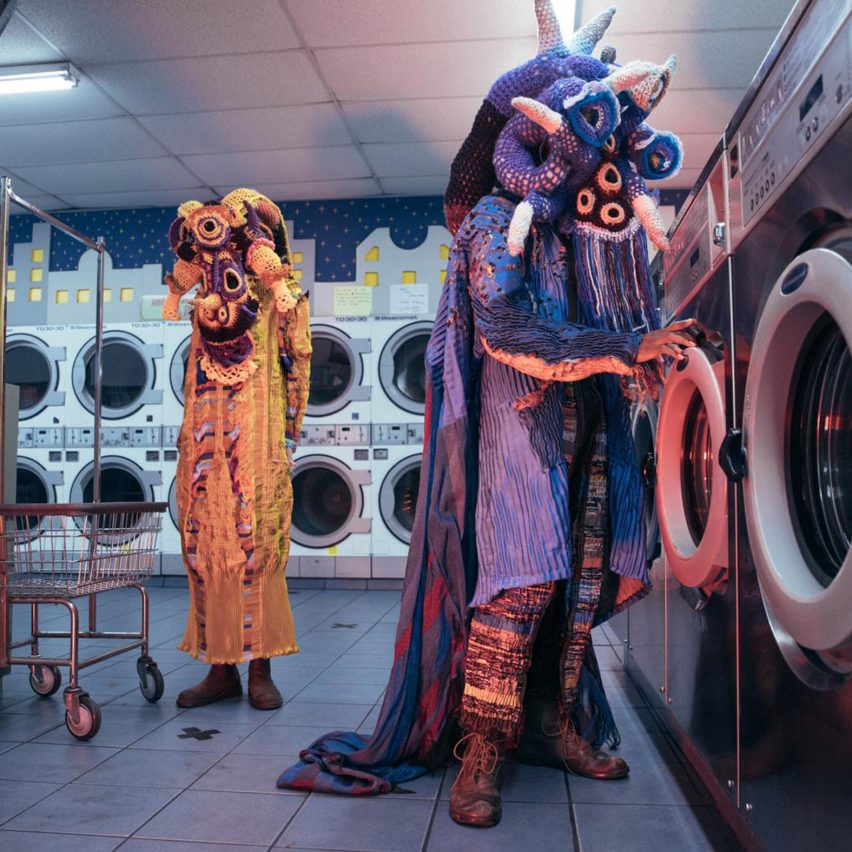 The Handmaid’s Tale costume designer Ane Crabtree has created a range of costumes for imaginary future inhabitants of Planet City, a cinematic metropolis for 10 billion people.

The outfits include full-length veils for urban beekeepers, pink headdresses for algae divers and horned headgear for bot herders that feature in the short film by architect Liam Young.

Other fictional professions include drone shepherds, who sport huge buffalo masks, and code talkers, who wear masks and helmets covered in spikes.

Crabtree’s designs were inspired by everything from antique helmets to tribal designs while incorporating practical solutions for new types of workers in the speculative city, which houses the entire population of the Earth.

“The idea was to keep the costumes rooted in the real, while incorporating the poetry of many customs from lots of different cultures and countries, particularly those within the global south, and to hybridize nature with technology and man,” Crabtree told Dezeen.

“The ideas were about how to recycle fabrics or articles of clothing, but also how fabric is made or remade in Planet City,” she said. “What is left at the dawn of a new civilisation?”

In Planet City, Young imagines a future in which the 10 billion inhabitants of the Earth live together in one giant, sustainable, multicultural city. This would only occupy a fraction of the planet, leaving the rest of Earth open for rewilding.

As the costume director for the project, Crabtree led a global team of seven artists, including a zero-waste designer and a felter.

In order to create outfits that could have been conceived in the future city, Crabtree used recycled fabrics alongside new ones she wove herself.

“Taking the research and either literally recycling pieces of fabric, or weaving them, old-school style, or creating them in new ways, and further-on creating pieces that looked like they were a part of the research, this was my approach to the materials for Planet City,” she explained.

Crabtree was also informed by antique pieces, including a fireman’s helmet from the Edo period in Japan (1603-1808), and combined aspects of these with modern designs, including a neon-pink plastic.

“It is reminiscent of the pink river dolphins of the Amazon, which also spoke to the pink algae being harvested for food and other resources in Planet City,” Crabtree explained.

“It was also something that would be good for fisherman’s waders, again for algae harvesting; I wanted to show costumes that could actually be worn during real work,” she added.

“Some costumes were approached as something specific to certain parades, celebrations, and festivals,” she explained. “Others were a riff on real workers, the people of industry, in Planet City.”

Workers in Planet City include algae divers and beekeepers as well more fantastical, future-focused jobs such as drone shepherds and code talkers.

These can all be seen in the film, which follows a non-stop planetary festival as it weaves through the mega-city on a 365-day loop and links up hundreds of community celebrations held by different cultural groups.

To get into the mind of the city’s inhabitants, Crabtree created a kind of manifesto that she called “the speculative inhabitants of Planet City.”

While some of the costumes seem to draw on tribal costumes, the final designs were a nod to many different influences.

“There were some semblance of tribal designs,” Crabtree said. “This is very important to me, culturally, as a mixed-race, indigenous person.”

“But it all goes back to the why of Planet City: the references to the global south, the climate, the implied sacred and celebrated uses for the costumes, the nod to ancestral inspirations, all done in a modern way, for a new city, with new rules and global understanding,” she added.

Crabtree has worked on designs for imagined worlds before. She created the costumes for TV-series Westworld and The Handmaid’s Tale, both of which depict worlds that resemble our own but with a more dystopian slant.

Designing for an imagined reality is different to tackling reality, she said, but argued that for Planet City the designs were rooted in realism.

“The beautiful thing about Liam and his take on research is that imagined futures always begin with the reality of what scientists, economists, socialists, et cetera, believe about the machinations of Planet City,” Crabtree said.

“The approach for me is always to look at reality. Once reality is in place, it takes a bit of jumping off cliffs to free the mind towards what could be.”

Many of the costumes feature masks or hats that fully cover people’s faces. While those might remind people of coronavirus face-coverings, they have more joyful connotations in Planet City.

“The faces being hidden was a means to imply that there was a celebration happening throughout Planet City,” Crabtree said. “It also was a helpful visual in the time of Covid.”

“I think masks or the idea behind slightly obscuring the faces of the people wearing the costumes, is a great way to suggest that the ego of the person is no longer showing.”

“A full costume including a headdress or mask is also a beautiful visual for a film,” she added.

The costumes were all unisex, as Crabtree hates the barriers for what she deems “limited ideas” for what is male and female in clothing. She felt that the world of Planet City would have clothing that is for everyone.

Her attitude to the subject also proved to be useful in practical terms: “This also was helpful as we had not cast the people for the film at the time the costumes were being made,” she said.

“A new world has the possibility of being all-inclusive and that is my idea of a great utopia.”

The 15-minute Planet City film was commissioned by the National Gallery of Victoria for the NGV Triennial and aims to provoke a discussion about how to balance the conflicting needs humans and the environment at a time of impending climate chaos.

“Planet City is a fiction shaped like a city,” Young told Dezeen earlier this month. “It doesn’t pretend to be an executable proposal.”

Other architects who are exploring potential solutions to world problems include BIG’s Bjarke Ingels, who recently unveiled his Masterplanet concept. This proposes the development of a global architectural masterplan.

However, Young described the Masterplanet vision as “continuation of the colonialist project.”

Photography is by Driely S.