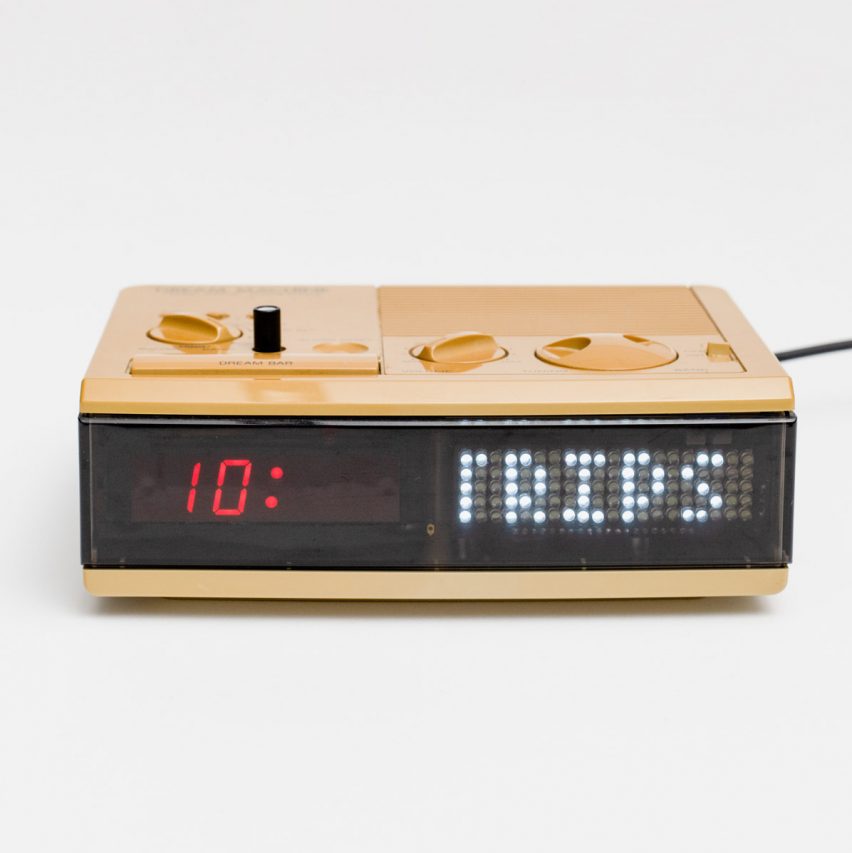 Ten designers have created new pieces from broken objects, including a clock radio that tells stories and a seashell that has been given an eerily realistic tongue and teeth, for the R for Repair exhibition in Singapore.

Curator Hans Tan chose a selection of designers for the project, which was commissioned by the DesignSingapore Council and aims to show how repairing discarded items can help us change how we think about waste.

“Being a designer-maker in Singapore where natural resources are scarce and craft fabrication practices hard to come by, the use of waste and found objects has been a common thread in my own works,” said Tan, who teaches sustainability and design at the National University of Singapore.

Members of the public replied to an open call for the exhibition by sending in objects that were broken or had stopped working but still held sentimental value. Tan Geok Khim sent in a cup that was part of a collection that had belonged to their mum.

“One day, I accidentally broke a handle on one of the cups,” Khim said. “Until this happened, I did not realise they were so important to me because I just could not bear to throw away the broken cup.”

Atelier HOKO “repaired” the cup by smoothing down the sharp edges where the handle used to sit, turning it into a cup to be held with both hands instead.

“Our main objective was to strike a fine balance between safe-handling and preserving the scars of breakage,” the studio said.

“As for the severed handle, we kept it in a box alongside a booklet about ‘drinking without a handle’. The paulownia wood box resists the ravages of humid air, making it ideal for storing treasured items.”

Some of the objects were repaired to have a different function than their original one. A clock radio, bought in the US and broken when it was plugged into a Singaporean electric outlet and blew its fuse, was turned into a storytelling device by Clement Zheng.

“The repaired object tells the time again; and also recounts 11 stories written by the owners about their time overseas,” Zheng said.

“A new story is triggered with each press of the snooze button, rendered through scrolling text on a bespoke LED panel, and to the tune of white noise generated by the refurbished radio speakers.”

Many of the things that were donated were chosen for sentimental reasons.

One of these, a toy bus that Jared Lim had been given by his parents, was turned into a diorama by design studio Mighty Jaxx in a nod to Lim’s “nostalgic reminiscence of Singapore’s past”.

“The toy bus is reimagined as a portal between past and present,” the studio explained.

“Half the bus has been repainted in the colours of public buses in the 1990s, while the other follows designs in the 2010s.”

Similarly, a seashell sent in by Ng Zi Ning symbolised a childhood friendship and was given a more artistic interpretation by artist Lim Qi Xuan, who added a tongue and milk teeth made from resin and polymer clay to the shell.

“The shell is symbolic as it once had life in the ocean, but found its way on our shores as a remnant and memory of its past,” Qi Xuan explained.

“Finding a parallel between the shell and the milk teeth we grow and shed as we come of age, I combined these motifs as a poetic way to tell the story of friendships that come and go in our lives.”

Tan chose the designers taking part in the exhibition carefully to create a variety of finished pieces.

“I selected the designers from different design domains, such as product design, interaction design, visual communication, and toy design, so that we could tackle the variety of object types that we were hoping to receive from the open call,” he told Dezeen.

The resulting objects are showcased at R for Repair together with an image of them in their original state and an explanation of the design rationale behind the repairs.

“My aspirations for the exhibition and project is to ‘repair’ our preconceptions towards repair by repositioning it as a desirable, viable activity in the contemporary context,” Tan concluded.

“It pushes the old ideals of repair based largely on mere restoration, to one that creates possibilities and allows invention. Most of all, I hope that people see broken-ness not as failure, but as an opportunity.”

R for Repair is at at the National Design Centre in Singapore from 13 January until 6 February 2021. For more architecture and design events, visit Dezeen Events Guide.