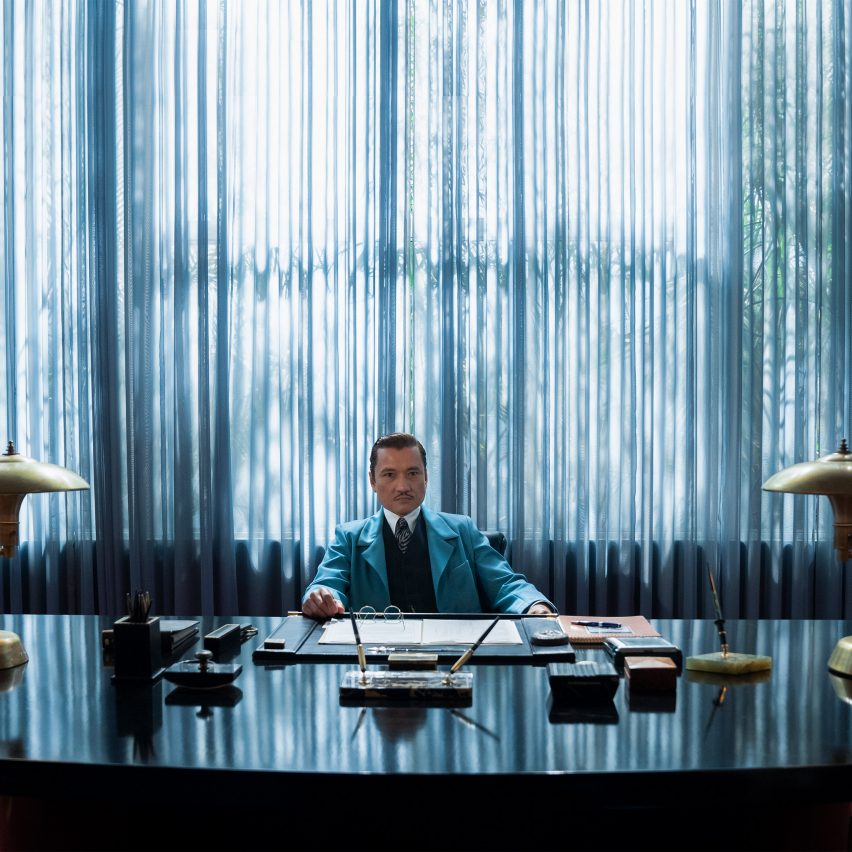 Production designer Judy Becker treated Lucia State Hospital like a character in its own right to ensure that the gruesome psychiatric institution takes centre stage in Netflix thriller Ratched.

The asylum is rich with unexpected architectural details – undulating glass-block walls or vast panoramic windows hidden behind floor-to-ceiling curtains – that are begging to be noticed.

This is a stark contrast to much of Becker‘s Oscar-nominated work, in which sets generally act as backdrops that merely complement the characters and action on screen.

“I haven’t done this often but in the case of Ratched, I really wanted the building to draw attention to itself as a character,” Becker told Dezeen. “It’s a bit of a misdirect when you see this gorgeous building and the well-dressed patients but then the most horrible things are happening in this place.”

“It’s like a beautiful person that’s got a really dark secret,” she added.

The show tells the origin story of Mildred Ratched, the antagonist of Ken Kesey’s classic American novel One Flew Over the Cuckoo’s Nest and head nurse at Salem State Hospital.

But while the book and subsequent 1975 film adaptation depict their setting as a bleak, clinical place with whitewashed walls, Ratched’s Lucia State Hospital tells a very different story.

That’s because Ryan Murphy, the series’ creator who is known for spearheading hyper-stylised shows such as American Horror Story, Scream Queens and The Politician, wanted the set to look less like an institution and more like a fancy resort that had been converted into a hospital.

“I threw away all my research on the grim asylums of the 1940s,” said Becker. “Sometimes it’s really warranted to do a very frightening-looking set design for a very frightening story. But the horror in Ratched is a little over the top, so you can balance it with all this beauty and that dichotomy works really well.”

The show went on to become one of the most successful Netflix shows of the last year and was watched by 48 million people within the first month.

Set in northern California in 1947, the series follows young Mildred Ratched as she weasels her way into working at Lucia State Hospital.

Through her story, the series explores some of the questionable approaches to mental healthcare at the time – from lobotomising patients by drilling a hole into their skull, to “curing” their homosexuality by locking them in a near-boiling bathtub in the name of hydrotherapy.

To ground the show in reality despite its stylised depiction of these horrors, Becker originally planned to shoot on location at Arrowhead Springs Hotel near San Bernadino, California.

Designed by Los Angeles architect Paul Williams in 1939, the complex features sprawling rooms and Hollywood Regency-style interiors by Dorothy Draper – one of the period’s most notable designers.

But the hotel’s owners refused to allow any filming to take place on-site, so Becker and her team ended up erecting a near replica of its interiors on the Fox Studio Lot in Los Angles.

Over the course of three months, the team reproduced Draper’s trademark stucco features and checked, monochrome flooring, as well as entire rooms based photos and measurements.

The lobby with its thick columns and chandelier reflected in the lacquered, black flooring was replicated almost entirely, while the inbuilt hexagonal shelves and sinuous fireplace mantel Draper designed for the hotel lounge were transposed into the patients’ recreational area (below).

“It was a huge set,” explained Becker. “It looks like one place on screen but we had to build it over two different sound stages, which are these big hangars. There were so many rooms and so many elements and we would keep adding new ones as new episodes got filmed,” she continued.

“Finally, there was no more space to build anything and we had to move the paint shop and some of the little dressing rooms outside to make more space because we just needed every inch of it.”

“I like to work with a very deliberate colour palette”

Since the set had to be furnished from the ground up, Becker worked with decorator Matthew Ferguson to source real period pieces from the time. To fill the huge rooms, these were bought in multiples where possible or otherwise, matching pieces were fabricated from scratch.

“Everything was custom upholstered. I tend to do that because I like to work with a very deliberate colour palette and it’s impossible to find exactly what you need just lying around,” said Becker.

Green is perhaps the most prominent colour in the show and features liberally throughout the asylum, as well as in the cliffside motel where Mildred Ratched makes her temporary home while working at the hospital.

“Green is a great colour because it’s very period-correct of the late 40s. And it can be a very unsettling colour or a pleasant one, depending on the shade,” said Becker.

“If you use a green with more yellow in it, it tends to feel anxiety-inducing while one with blue undertones is more relaxing and makes you think of swimming pools.”

Each shade that made it into the final show was painstakingly tested on different furniture pieces and in various lighting conditions, to ensure that it was conveying the right effect.

Becker also added warm hues of coral and peach to keep the hospital feeling inviting and deceptively “non-horrific”, while the tiled floors and walls were held in neutral black and white so as not to clash with the costumes.

“I think if you had green walls and green nurses uniforms and this and that, it just would have just been too much,” said Becker. “It probably would have won an Oscar if it was eligible because too much design tends to.”

According to Becker, perhaps the biggest downside to shooting on a set is the fact that the view out of the windows has to be created completely artificially.

Often, directors will work with a Translight – a transparent polyester sheet that is printed with an image of the desired setting and lit from behind to create the appearance of a real exterior scene. But Murphy and Becker agreed that this fell short of the realism they were hoping to accomplish.

“They pretty much always look fake,” she said. “Nothing is moving and the lighting doesn’t change like it would in real life.”

Instead, she hid most of the windows behind semi-translucent curtains and set up a veritable greenhouse of real and fake plants on the other side to create the appearance of foliage.

“We had someone on set tweaking them to camera so that the shadows and reflections looked real and not always the same,” Becker remembered.

“There were fans blowing on the foliage and fans blowing on the curtains, so it was a very elaborate process to get the light coming through the window to look appropriate on camera. I designated an art director to be in charge of just this process because it was so important to Ryan.”

All images are courtesy of Netflix.

The post Asylum in Ratched designed to look like "a beautiful person with a really dark secret" appeared first on Dezeen.