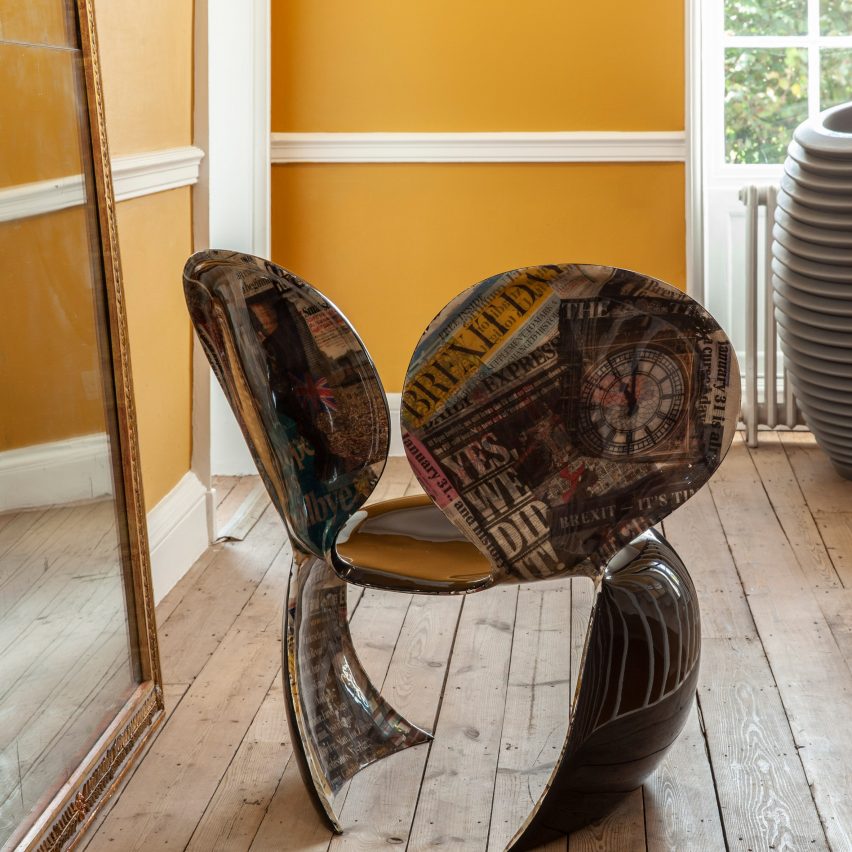 A Brexit-themed chair and a crumpled bin are some of the pieces to feature in an exhibition at Newlands House gallery that showcases 40 years of work by Israeli designer Ron Arad.

The exhibition is titled Ron Arad 69, in honour of the designer’s 69th birthday in 2020, and showcases 50 standout pieces from his extensive oeuvre.

Some of the pieces date back to the 1980s, when Arad established his eponymous studio, while others are from the 90s and 2000s – as well as a select few works that were released as recently as last year.

They are all displayed amongst the grounds and historic rooms of Newlands House, a 700-square-metre gallery in West Sussex which occupies a heritage-listed Georgian townhouse and its adjoining coach house.

It is headed up by creative director Simon De Pury, who says it was an obvious choice to create a show around Arad’s work.

“Ron Arad is a giant in his field,” Pury told Dezeen.”He has developed his uniquely personal language; while he has been copied by many, his work remains strong and timeless.”

The pieces in the exhibition have not been arranged in chronological order, but simply placed where Pury felt they looked best in the gallery.

“It’s not a retrospective, it’s a sampling of works that I personally love from Ron’s career,” Pury explained.

“I greatly look forward to seeing the contrast between the 19th-century architecture of the gallery and the resolutely 21st-century feel of Arad’s dazzling and bold works,” he continued.

“I hope visitors will enjoy experiencing the beauty, elegance and also the sense of humour of his amazing work in the intimate setting of a house that helps the viewer imagine what it would be like to live with it.”

Read on to get a glimpse of five works that feature in the exhibition: 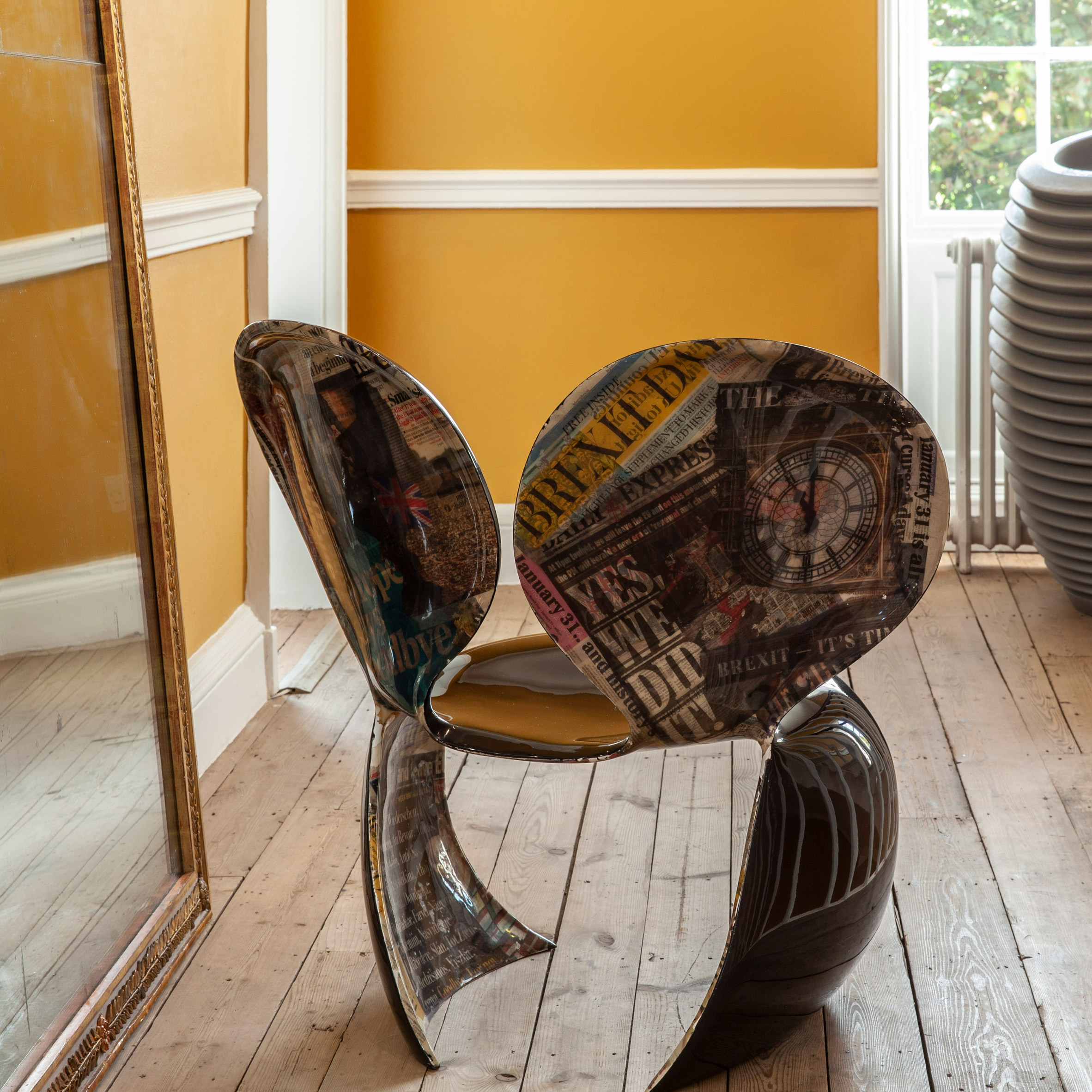 More colloquially known as the Brexit Chair, Now What is haphazardly plastered with clippings of newspapers that were released on Friday 31 January 2020 – the day that Britain left the European Union.

Now What’s rounded seat and Mickey Mouse-shaped backrest riffs off the curvaceous form of Arad’s Big Easy chair, which was designed back in 1988. 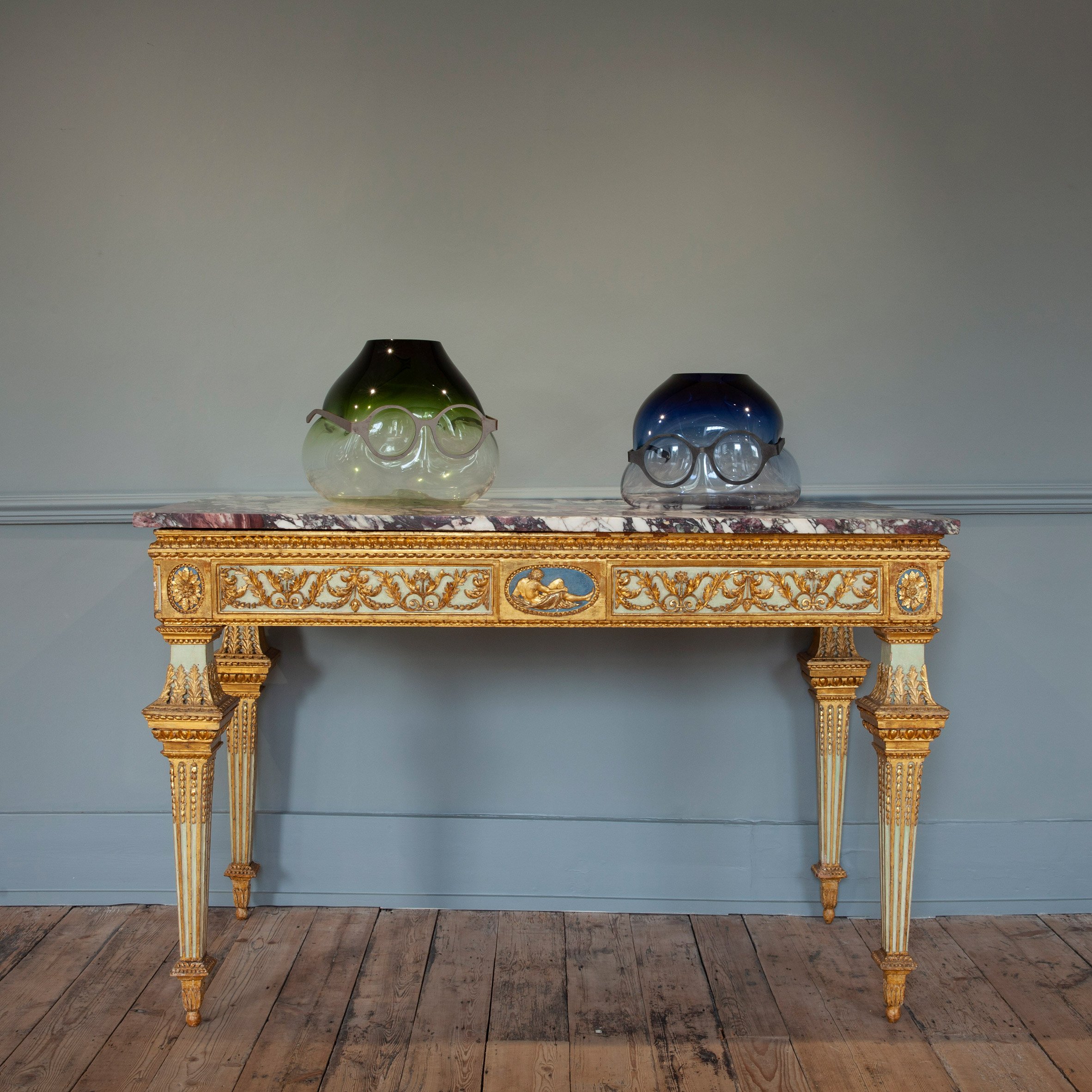 These ombre-effect coloured vases were originally launched during the 2018 edition of Milan Design Week.

To create them, Ron Arad asked experts working at Italian glassware brand Venini to blow glass through metal-frame spectacles – the spectacles act almost like a taut belt, which forces the vase to bulge outwards at the sides.

Arad’s Blame The Tools sculpture is shaped to resemble a life-sized Fiat 500 car. Crafted from stainless-steel sheets and rods, the gridded sculpture is so heavy that it had to be hoisted by a crane into Newlands House’s front garden.

“I like to imagine how this car would look if it stayed here and we let nature do its work, eventually you’d have vegetation growing through it,” said Pury. 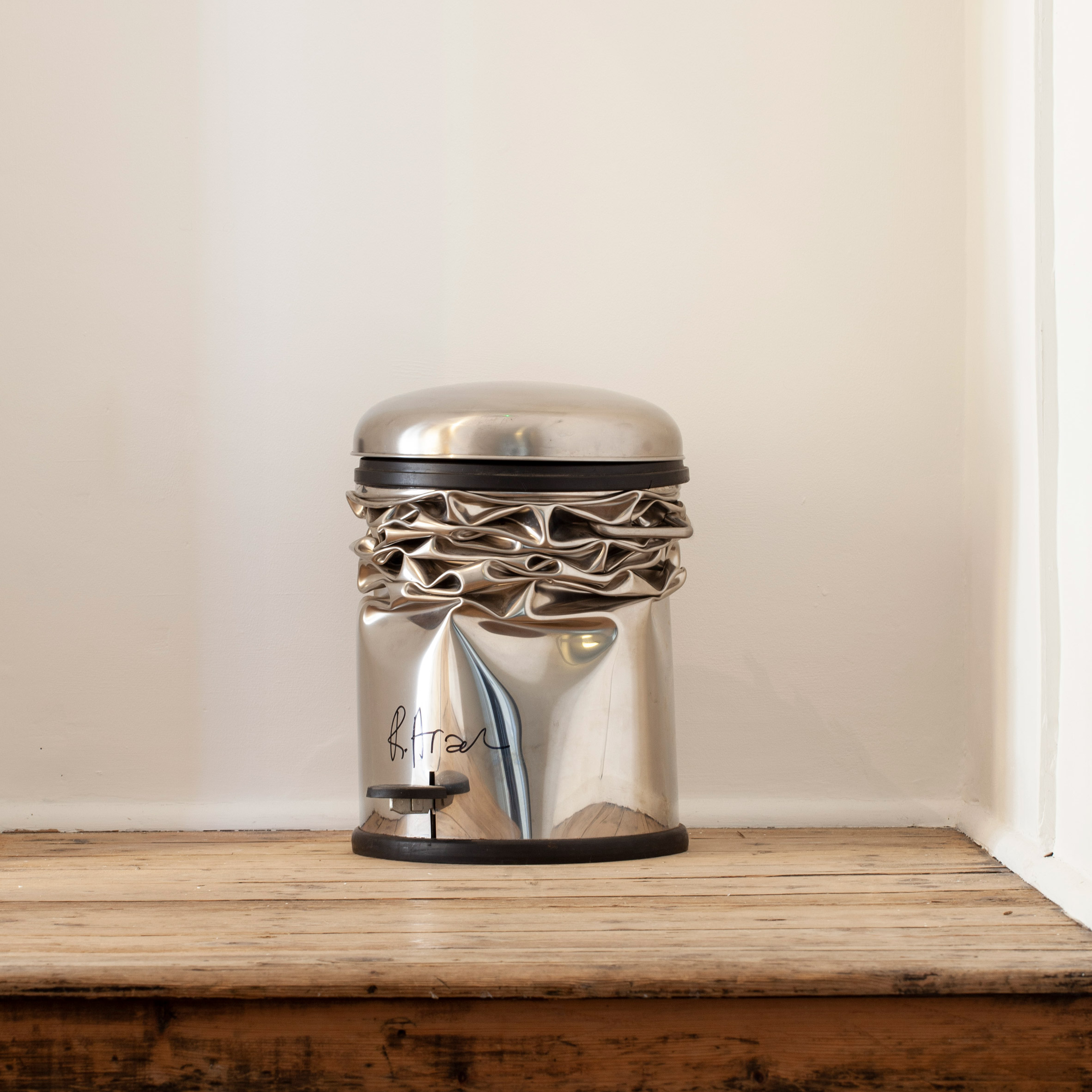 Danish retailer Vipp asked Ron Arad to customise one of its bins for a charity auction 15 years ago.

Instead of making aesthetic changes, the designer crushed the product from the top down, making deep dents in its silver-metal exterior. Arad’s signature appears just above the bin’s foot pedal. 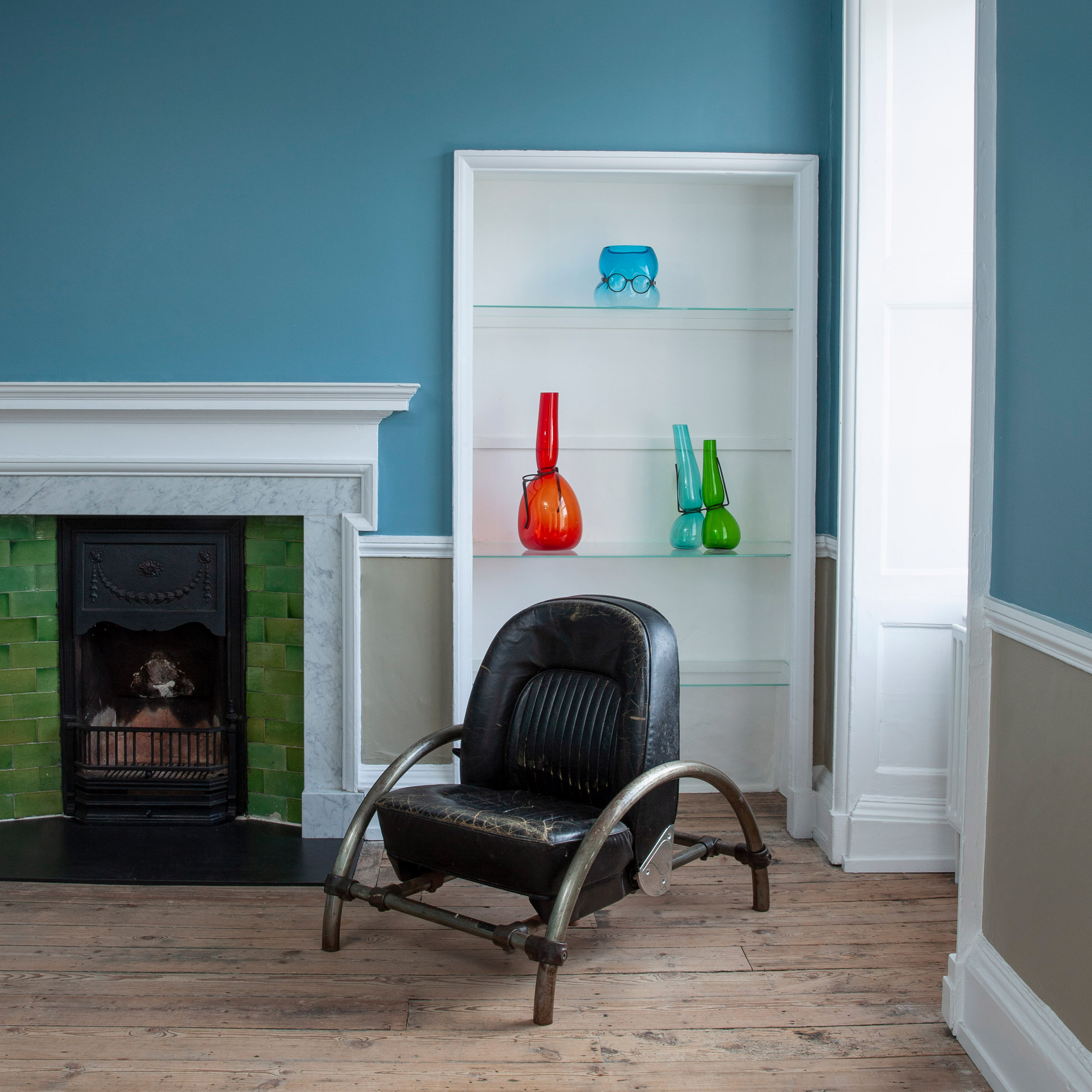 Found objects were used to form The Rover chair, which is the first piece of furniture to be designed by Arad.

The chair’s worn leather seat was taken from a Rover P6 car, while its tubular steel frame is made from Kee Klamps that were once part of a milking stall for farm animals.

Photography is courtesy of Elizabeth Zeschin unless stated otherwise.

Ron Arad 69 is at Newlands House, UK, from 19 September 2020 until 7 March 2021, but the gallery is currently closed due to Covid-19. For more architecture and design events, visit Dezeen Events Guide.

The Evolve Chair is made of recycled plastic from discarded laptops