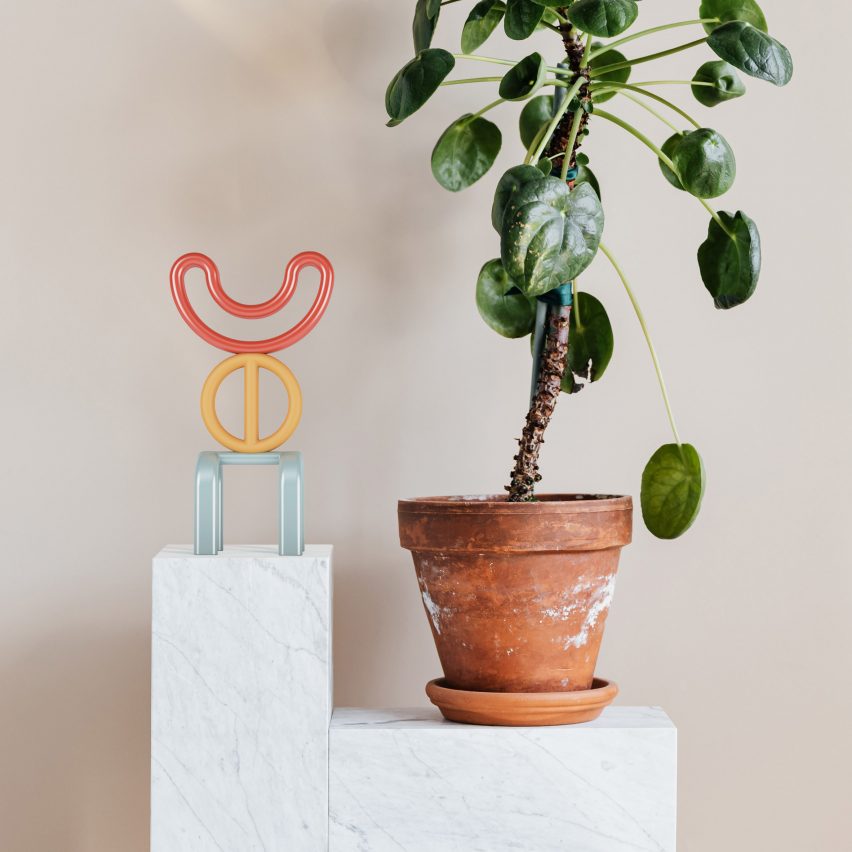 Called Balisa, the kit includes 21 different modules of a unique colour, weight and texture, developed in collaboration with psychologists who specialise in the subject and their patients.

Each of these pieces represents a different emotion or step in the survivor’s healing process, which they have dealt with in their therapy session.

“During therapy, the survivor will relate the emotion that is being worked on at each moment, such as self-esteem, with the piece that they believe best represents that feeling,” Nadal told Dezeen.

“This facilitates the easy understanding of abstract concepts and improves communication between the patient and the psychologist, since they can see a physical representation of what is being spoken about.”

Although the pieces currently only exist as prototypes, which were moulded from clay or 3D-printed, the final versions will incorporate a broad material palette from resin to aluminium, acrylic and acetate to create a different weight, temperature and tactility for each.

In this way, the pieces are designed to engage multiple senses from sight to touch and balance, in the hopes of creating a deeper association between the module and its assigned emotion.

The pieces can also be assembled together into a kind of totem that the patient can place as both a decorative and symbolic object in their home.

Nadal hopes this can function as a prompt for reflection and introspection while serving as a visual reminder of how far the patient has come on their journey.

“The healing process that is experienced when survivors face the trauma caused by child sexual abuse is long and hard,” said Nadal, who is a student at the Elisava School of Design and Engineering in Barcelona.

“It is for this reason that Balisa is used both in the sessions with the psychologist and also when the survivor gets home. This allows the survivor to feel secure with a professional while evolving autonomously.”

Since dealing with trauma is rarely a linear process, the Balisa kit is designed to act as an open-ended exploration, with patients able to add or subtract different pieces from their totem over time.

“It is important not to force the survivor to follow a defined process, but it is best to adapt to the needs of each person,” said the designer.

“For this reason, Balisa does not have an end. The goal is not to heal completely since everyone will always have problems and situations that affect them. The goal is for the person to learn how to manage these problems when they arise.”

Nadal aims to start production of the Balisa tools next year.

Similarly focused on making feelings tangible through different tactile sensations is Israeli designer Yaara Nusboim, who has created a series of dolls for children that can be used as part of play therapy to help them process difficult or repressed emotions.

This week we looked forward to architecture in 2021