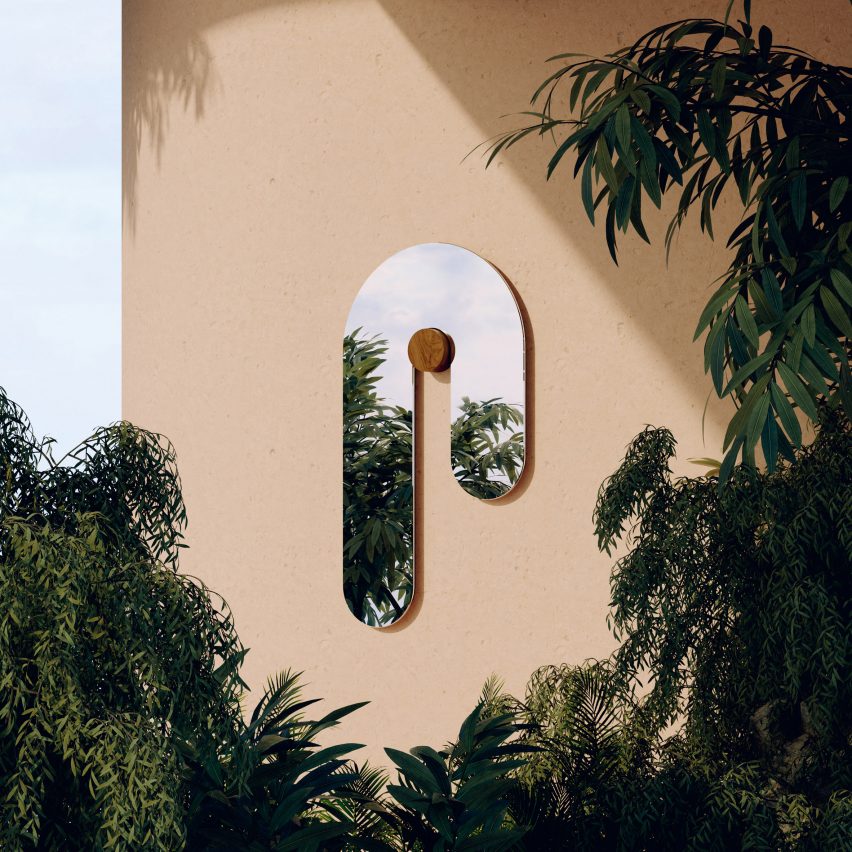 Each of the four Melt Mirrors follows a different, gently sloping form, creating the impression that they are made of a flexible material rather than rigid glass.

“We like to examine visual cues that most of us innately understand but may never be conscious of,” said Danny Giannella, who co-founded Bower Studios alongside Tammer Hijazi and Jeffrey Renz.

“If something droops around something in a certain way, we automatically perceive it to be soft. By using a material that is clearly not soft, we flip the laws of physics on their head and bring these inherent visual cues to light.”

The mirrors are precisely cut using a glass CNC machine and mounted to a wood substrate that is edged in a rich, deep-brown walnut.

Attached to this backboard is a circular, solid wooden peg that remains visible from the front and appears to prop up the entire mirror, with the glass wrapping perfectly around its top half.

“It looks like the mirrors would slide down and flop to the floor like wet noodles without the dowel,” Hijazi told Dezeen.

“All the pieces in our Melt Collection have a grounding element – a rigid component that allows the other, melty component to express itself.”

Also included in the range are a series of seats draped in concrete and tables with curved travertine tops.

Accompanying imagery sees the pieces presented in a 3D-rendered environment that was designed by digital artist Alexis Christodoulou to offer a “surreal manifestation of the past few months” of living with Covid-19.

The derelict setting is meant to represent the “ruin of a past life”, which is being reclaimed by nature, and resembles Spanish architect Ricardo Bofill‘s seminal La Fábrica development, set within the shell of a former cement factory.

“We wanted this collection to exude extreme tranquillity and relaxation, hoping it would be somewhat contagious to the rest of us who could probably loosen up a bit these days,” added Renz.

Bower Studios has previously designed a series of trompe l’oeil mirrors that create the illusion of three-dimensional architectural features such as portholes or arched doorways.

These can be used, as for example in the showroom of Brooklyn shoe brand Gray Matters, to make a space appear considerably larger than it actually is.