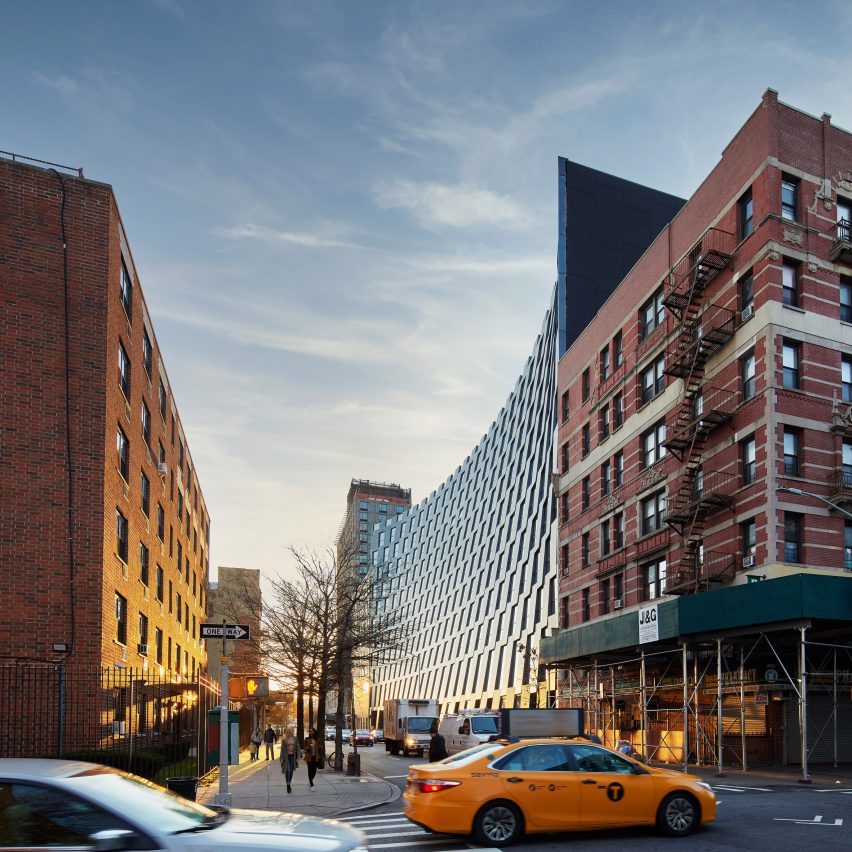 In this week’s comments update, readers are discussing BIG’s mixed-use development in Harlem, New York, and sharing their views on other top stories.

Architecture firm BIG has built The Smile in New York’s Harlem neighbourhood to house a nursing school and 223 residential apartments.

Situated at East 126th Street the development is named for its curved, stainless-steel facade, which the studio designed to recall the “textured surface of the moon”.

“Does that building actually lean back from the street?”

Readers are torn. “Facade looks great in the photos,” said Z-Dog, on one hand.

Troels Steenholdt Heiredal disagreed: “Does that building actually lean back from the street as if it is physically embarrassed by its traditional neighbours? Nothing says Harlem like a rooftop pool from where you can look down on the neighbourhood.”

“Italian kitchens, steel panels made in Germany… Harlem is certainly not what it was once,” replied Apsco Radiales.

“It looks like a very fancy student accommodation to me,” concluded Louis.

Does The Smile make you smile? Join the discussion ›

“This building seems to express its split personality” says commenter

Italian architect Franco Stella has sparked debated with his reconstruction of the baroque Berlin Palace. Damaged during world war two, the former home to Prussian kings and German emperors will now house the Humboldt Forum museum.

“This building seems to express its split personality,” said 竜皐. “Is this something people want? It makes things frustrating, confused.”

“That modern façade is just an oozing gash, isn’t it?” asked Sharad Majumdar. “Are modern architects really so lacking in imagination that they couldn’t create some original designs that would be sympathetic to the historically accurate façades?”

James Coulee replied: “Nothing wrong with having a façade with a contemporary language. But there’s such a lack of a sense of scale and detail in the new façade and interiors… new and old are not in harmony here.”

Are readers being harsh? Join the discussion ›

“The man is certainly a genius” says reader

Commenters are divided over news that James Whitaker’s starburst-shaped shipping container house intended for Joshua Tree, California, has gone on sale for $3.5 million. Construction is yet to start.

“Well, the man is certainly a genius,” said Grey. “Excellent project. This is undeniably a commercial success. Many non-architects will find this pretty cool. Remember kids, architects don’t pay architects – clients do.”

Talk disagreed: “Complete nonsense. Normally shipping container architecture is depicted as being pragmatic but this is pointless formalism, incredibly inefficient use of materials with massive amounts of unusable volume, no atmosphere and an interior that looks like a bad showroom.”

“$3.5m to be cooked alive in a student project,” concluded What.

Is Wagon Wheel Road house worth $3.5 million? Join the discussion ›

“Modernism doesn’t care what you think of it” says commenter

“Overall it looks really great,” said Rd. “I’m impressed with the interior, but the outside’s a bit harsh in its environment for my taste.”

“The exterior is too relentless in its pursuit of rationality for me,” continued Heywood Floyd. “But things on the interior loosen up quite nicely. Immaculate detailing and interesting material contrasting as expected. Nice work overall, as usual.”

What do you think of the Kunsthaus Zurich museum? Join the discussion ›