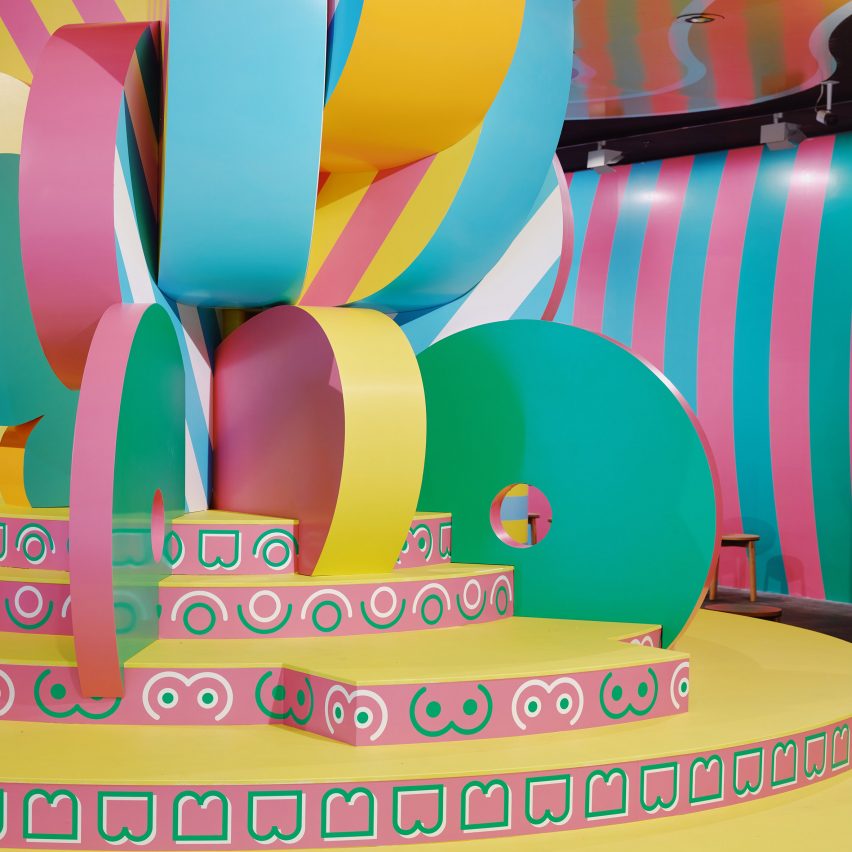 “Queer-oglyphs” and a “genderf*ck” colour palette feature in an installation designed by Adam Nathaniel Furman and Australian practice Sibling Architecture as part of the National Gallery of Victoria‘s NGV Triennial.

Although the design incorporates stereotypically gendered colours such as baby blue and pink, these are recontextualised and subverted to challenge traditional notions of what is male or female. This is known in the LGBTQ+ community as a “genderf*ck”.

“I see colour as a political, social, active agent within architecture and design, rather than something that’s superficial and to be disregarded,” Furman told Dezeen.

“Here it’s specifically taking colours, which are referencing different gender stereotypes and the idea of the gender reveal. But it’s very much a genderf*ck so they’re all blended together. They’re obviously referential but they don’t have a proper hierarchy and they’re not separated.”

An installation of geometric forms piled high on top of a circular podium, like decorations on a many-tiered wedding cake, strategically divides the space to create areas for togetherness and solitude, for watching and being watched.

In this way, it pays homage to three distinct spatial typologies – boudoirs, salons and clubs – which toe the line between public and private and have historically acted as safe spaces for marginalised groups in society.

“These are places where, from the 18th century onwards, women, queer people and people of different political or religious beliefs were able to meet and share their identity with others but also where they could express their identity through the design of a space,” said Furman.

“It’s a natural human habit. The first thing that humans in all societies do is they start to express their values and identities through body painting, jewellery, wall paintings, textiles – it’s what sets us apart from other animals in nature.

“That urge has not always been possible to fulfil for minority groups in the West, except for in these semi-private spaces like the salon, the boudoir and later the nightclub,” he continued.

Working together entirely via Zoom, Furman and Sibling Architecture incorporated references to each of these spaces within their final design.

Painted screens with playful cutouts – envisioned before the time of social distancing – separate people into small, individual boudoirs while big, round tables around the central feature offer larger groups a space to converge and converse as they would in a salon.

The central carousel, meanwhile, is reminiscent of the raised catwalks and DJ booths often found in nightclubs.

“As much we were playing with typologies, we were also thinking about different types of people and the ways they interact,” said Furman.

“So there are spaces for the introvert or the voyeur, who can kind of hide and be in a small, enclosed space with soft edges and still peek out. But then you can also be spectacularly extroverted and expressive like you are on the podium in a club.”

The tiers of this podium are fringed in what Furman and Sibling Architecture have playfully dubbed “queer-oglyphs” – symbols that playfully nod to different body parts and gender markers.

“They’re not at all obvious, they just look kind of cute,” said Furman. “So it’s this idea of being ambiguous, in-between and non-binary.”

The queer-oglyphs will also be printed on a series of merchandise, from hats to bum bags and T-shirts, that will be sold at NGV.

Furman describes the installation as “super-camp”, which is to say “not monetised, not about what other people think about you, not indicating how clever you are”.

“It’s actually just about being you and kind of over the top but not saying sorry in any way,” he continued.

“I just hope that it’s just going to make people happy. Even if they hate it – I’m sure there’s a lot of very sophisticated designers who will hate it – it might just make them giggle anyway.”

Boudoir Babylon is one of 30 new works that were commissioned especially for the NGV Triennial.

Also among them is a giant, mutant octopus made from hand-felted cigarette butts that was created by South African designer Porky Hefer as part of his Plastocene project about ocean pollution.

Photography is by Sean Fennessy.

Boudoir Babylon is on view at NGV International in Melbourne from 19 December 2020 to 18 April 2021. See Dezeen Events Guide for an up-to-date list of architecture and design events taking place around the world.

Competition: win a BC21 digital wireless charging clock by Braun