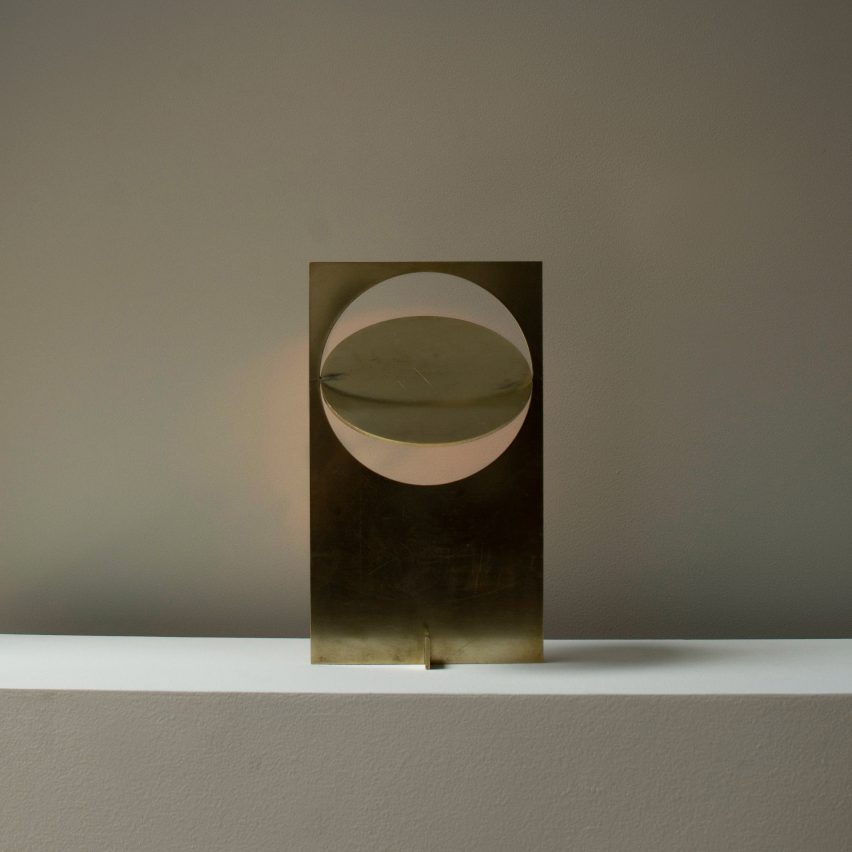 Designer Manu Bañó, the co-founder of EWE Studio and an Esrawe Studio associate, has introduced his first product under his own name – a lamp made from raw metal that can be assembled by hand.

The OBJ-01 light is made from laser-cut stainless steel, steel or brass and manually assembled using a rubber hammer.

Bañó buys the metal from different metal distributors in Mexico City, where he’s based, looking for the least scratched sheets to have to polish them as little as possible.

“I am attracted by raw and pure materials, by their weight, by the industrial processes that transform them,” Bañó told Dezeen. “I like the depth of metal and its reflective properties.”

The project came about during lockdown, which gave Bañó time to think and birthed the idea of creating a new object.

“I spent a lot of time working at home,” he said. “I have a large collection of design objects and crafts, so I live surrounded by things I like.”

“I decided that I wanted to design an object to add to my collection so that I could see it every day among the objects that I admire.”

Bañó came up with the design through working with materials he already had at home, mainly recycled cardboard from shipping boxes, before graduating to metal.

“I started with complex designs that I gradually discarded due to the impossibility of going to the production workshops,” he explained.

“I ended up stripping away the complexity of the design and keeping the essentials. I decided to work just with one material and one industrial process which I was familiar with; metal and laser cutting.”

The resulting OBJ-01 lamp has a sleek, geometric shape and consists of a rectangle, a circle and a cylinder that holds an LED light.

The circular screen at the centre of the lamp can be rotated 360 degrees to direct the light in a variety of ways.

Designed to be a timeless object, the production of the OBJ-01 light minimises offcuts.

“Along the production process there is practically no waste since the size of the lamp corresponds to the commercial format of a metal plate,” Bañó said. “I make five lamps out of a plate of 122 by 61 centimetres.”

The lamps are then sealed with beeswax and completed with a LED light. Bañó is producing a small run of the lamp, with 10-20 lamps in each numbered series, which also come with some poetic inspiration.

“Along with each lamp, I deliver a poem written and signed by Guillermo Crespo Galiana, a young Valencian poet who wrote three poems inspired by the piece,” Bañó said.

“I love to think that these poems can be displayed near the lamp, so there are always two ways of interpreting it.”

Together with Age Salajõe and Héctor Esrawe, Bañó is the co-founder of EWE studio, which was longlisted for the Dezeen Awards 2020 designer of the year award and recently opened its Mexico City showroom inside a former dance hall.

He is also an associate at Esrawe Studio, which was named interior design studio of the year at the Dezeen Awards 2020.

Photography is by Alejandro Ramírez.