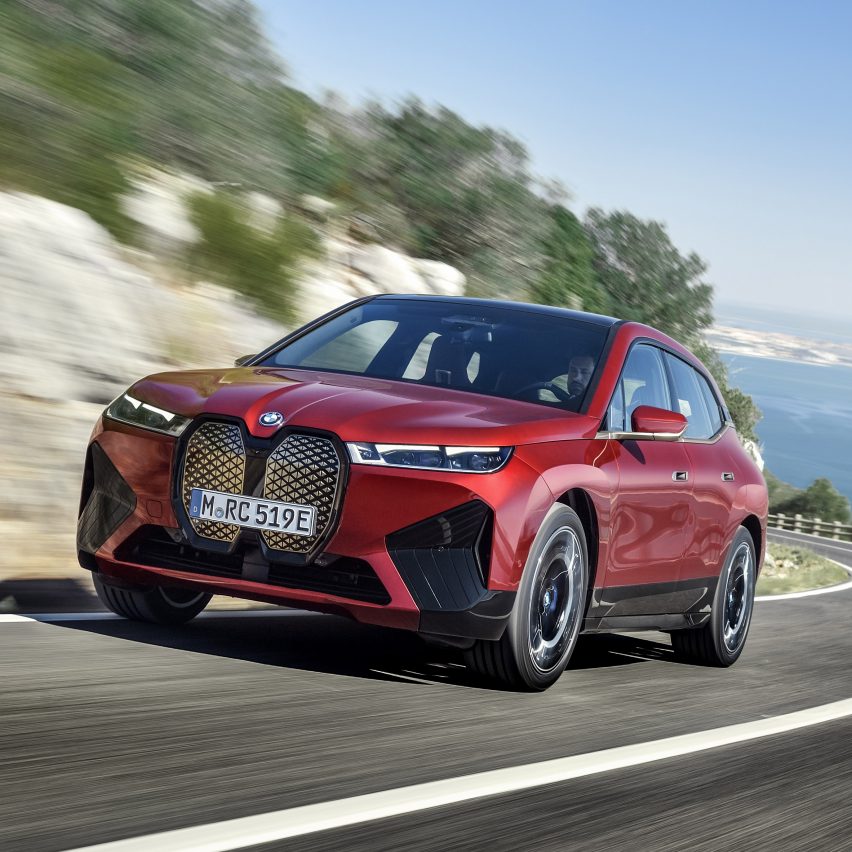 Dezeen promotion: conceived and designed to be purely electric, the BMW iX is first in a new generation of cars made by the German car manufacturer.

Set to go into production during the second half of 2021, the electric BMW iX has a forward-looking design that was designed from the inside out.

“The BMW iX heralds a new age in mobility and focuses on a fresh interpretation of design, sustainability, driving pleasure, versatility and luxury,” said the automaker.

Created from the inside out, the BMW iX’s minimal yet striking exterior is the result of placing the vehicle’s occupants at the heart of the design,

“The minimalist use of character lines and generously shaped surfaces conjure an aura of supreme assurance,” said the company. “The crisp lines, clear structure and almost rectangular contours around the wheel arches contribute to an imposing body design.”

“The reduced design language steers the eye onto precisely constructed details which accentuate the sophisticated character, brand identity and optimised aerodynamics of the BMW iX.”

The exterior features a number of almost-undetectable intelligent technology features which they call “shy tech”, including the BMW logo that doubles as a lid for the windscreen washer fluid.

Due to its electric drive system, the car requires a minimal amount of cooling, therefore the kidney grille at the front of the BMW iX serves as an intelligence panel.

Other “shy tech” elements include discreetly positioned cameras and sensors that are placed behind transparent surfaces or integrated into the BMW rear logo, and flush-fitted door openers that can be operated at the press of a button.

“The car is technologically highly complex, but it feels very clear and uncomplicated,” he added. “The BMW iX offers a mobile living space in which people will feel at ease and the car’s intelligence is always available without becoming obtrusive.”

BMW compares the iX to the BMW X5 in length and width, and to the BMW X6 in height and in terms of its “flowing roofline”.

The size of its wheels, however, is comparable to the BMW X7.

The car’s lightweight structure is made from a mixture of carbon fibre, steel and aluminium, making it robust yet lightweight. Its low weight and aerodynamic shape also supports its all-electric drive system, increasing its electric range by reducing drag.

The BMW iX is fitted with the fifth generation of BMW eDrive technology, which incorporates two electric motors, the power electronics, the charging technology and the high-voltage battery.

The electric powertrain is estimated to be able to have a maximum output of over 370 kilowatts, or 500 horsepower, which will allow the car to go from zero to 62 miles per hour (100 kilometres per hour) in under five seconds.

It also features new fast-charging technology that enables it to be charged from 10 to 80 per cent of its full capacity in under 40 minutes.

More information about the BMW iX can be found on BMW’s website.