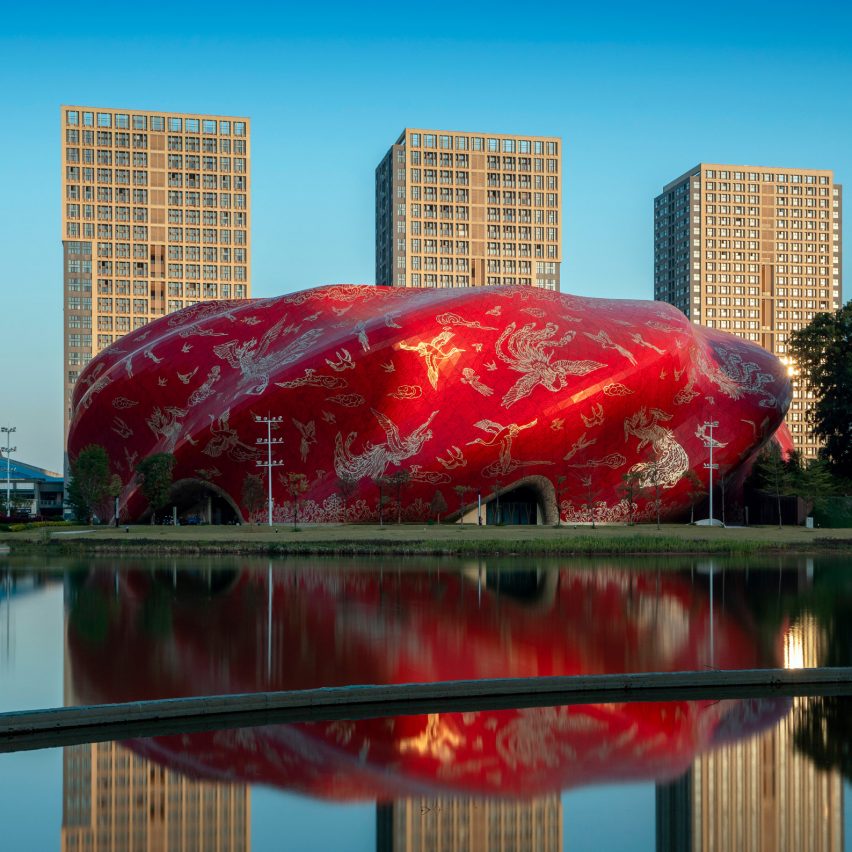 In this week’s comments update, readers are discussing a theatre in Guangzhou, China, and sharing their views on other top stories.

Steven Chilton Architects has designed the Sunac Guangzhou Grand Theatre in China to reflect the city’s historical connection to silk. It is also imprinted with patterns that represent Guangzhou’s current tattoo culture.

The building will host performances from visiting production companies and forms part of a group of entertainment venues being built in the city’s Huadu District.

Giles B agreed: “This is brimming with originality in its shape and silky skin and the kitsch colour scheme contrasts wonderfully with the grey surrounding buildings. Wonderful work.”

“Effervescent, daring, fabulous, a structural tour de force,” continued Will Dorling. “Exquisitely wrapped, hi-octane fire ball of a building, this is haute couture architecture on crack and a joy to behold!”

Benny shared the sentiment: “Wow! The graphic and formal qualities of this building are so complimentary. It’s an event building that is an event unto itself. It’s a joyful riot to all the surrounding tower blocks.”

Are you equally amazed by the Sunac Guangzhou Grand Theatre? Join the discussion ›

“This is a small but important step” says commenter

Readers are debating news that Harvard Graduate School of Design has removed Philip Johnson’s name from a house he built while studying at the institution. The house has been renamed due to the architect’s support for the Nazis’ regime.

“This is a small but important step,” said Conway Pedron. “I am proud of the GSD for being first to respond in such a thoughtful way. We can’t undo what has been done in the past, but we can contextualise it, warts and all.”

“It is important to put his name in context, but erasing his name is, in my opinion, the wrong way to do so,” replied Floooo. “How about putting a plaque next to his important works? That way people can learn from and think about his past.”

Alfred Hitchcock agreed: “Time to rewrite history again? Wake up and smell the…”

Should Philip Johnson Thesis House have been renamed? Join the discussion ›

Commenters are discussing a forest retreat in southeastern Quebec, which architect Natalie Dionne raised on stilts to meet the level of the rocky landscape.

“A beautiful tree house,” said Aigoual48. “I love the plan and the minimalist interior which blends harmoniously with the outside.”

“Beautiful home in a beautiful setting, but I don’t think it blends into the landscape,” replied Leo. “Building on stilts in Quebec is not an energy-efficient strategy.”

Are you impressed by Forest House? Join the discussion ›

“I would never buy this” says commenter

Readers are critiquing a solar and electric vehicle with a range of up to 1,000 miles on a full battery. It was designed by US startup Aptera.

“There is no market for three-wheeled cars,” said Stefanos S. “I would never buy this. One little crush will send you tumbling.”

Ivan was less critical: “This could be good as long as it’s affordable to a majority of the population.”

“Love it,” concluded Jonathan HB. “It’s like a big covered bicycle with an extra wheel. Where do the TV and washing machine fit?”

What do you think of the Aptera car? Join the discussion ›