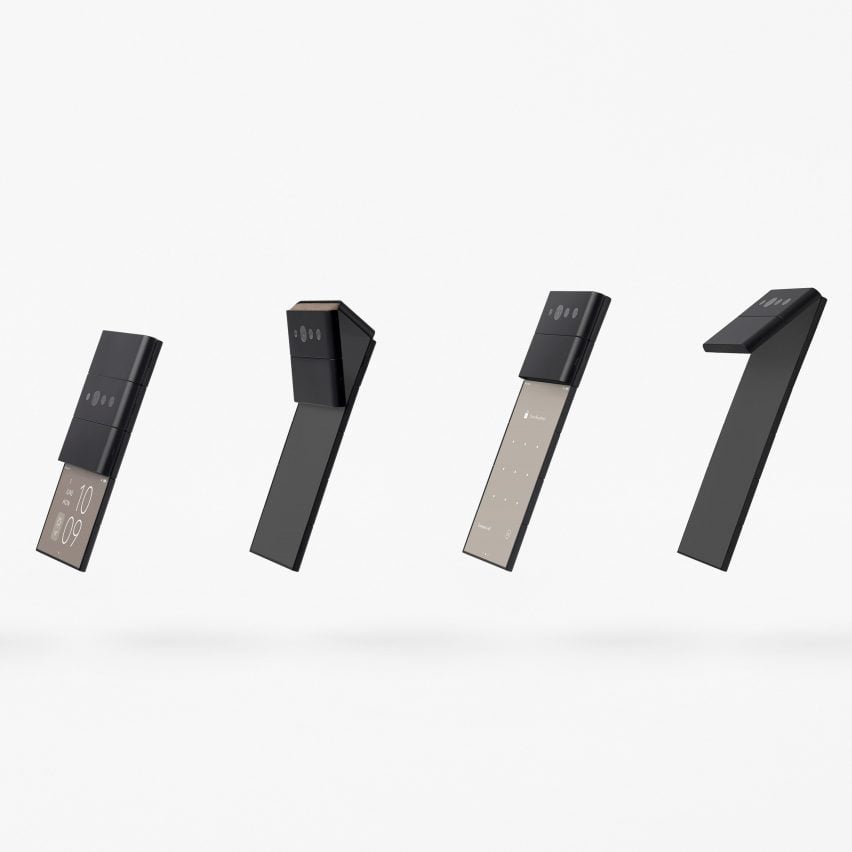 Japanese studio Nendo has designed a sliding-phone concept that can be folded down three times to the size of a credit card for smart device manufacturer OPPO.

The Slide-Phone concept has seven hinges that allow the full size phone to fold down three times in the same direction into a 54-millimetre-by 86-millimetre device.

Described by Nendo as moving “like an inchworm”, the phone folds out section by section in a sliding formation, with each hinge acting as the bending back of the inchworm.

The user simply slides the OLED screen up with their thumb to reveal parts of the touchscreen beneath.

For instance, sliding one fold up opens up 40 millimetres of the screen to allow users to see the time, look at their call history and notifications or play music.

“Among foldable smartphones with OLED panel monitors developed in recent years, most follow the trend of folding to the size of a standard smartphone and unfolding to a screen two or three times as big,” Nendo explained.

“By using the folding technology, portability was enhanced exploiting the compactness for a new sense of functionality instead of the screen being enlarged,” it continued.

“Like an inchworm, the phone makes use of its multiple joints to in effect slide sideways, and can be transformed only by the user’s one-thumb operation.”

“The design opens up new possibilities for smartphones, for their use not only while fully folded or opened but while partially unfolded or while bent,” added Nendo.

Sliding the second fold reveals 80 millimetres of the screen and allows the user to make use of the camera, which will have moved to the top of the device.

As the camera would be facing the user, it is best positioned for taking selfies or for video calls.

Lastly, unfolding the rest of the phone reveals a thin, seven-inch touchscreen. When positioned horizontally, each side of the screen turns into a operating panel with touchscreen buttons.

In “game mode” these panels can be used as controllers, while in “multitask mode” several apps are displayed in rows and the user can also take photographs in panorama.

There is also a slot in the side of the phone for a stylus, which can be taken out and used like a pen on the touchscreen.

Nendo wanted the phone to feel like a book or notepad, with the action of retracting and extending the screen being like “flipping the page”.

Each of the hinges are covered with suede leather to give the phone a more natural feel, while the exterior is coloured in “calming tones” of black, silver, sage green and brick red that were chosen to complement the suede.

Nendo has also designed a wireless charger for the phone, which has a cuboid-like shape with a cut-out in its centre that the phone slots in to.

The charger has an integrated stand that can be angled to match the hinged mechanism of the folding phone.

Nendo’s Slide-Phone concept design for the smart device manufacturer comes just a few weeks after OPPO revealed a smartphone concept called the X 2021, which expands by rolling out its screen on a miniature conveyor belt.

Alongside the sliding and folding phone, the Japanese studio has also designed a mobile accessory collection for OPPO called Mobile-Link, which includes wireless earbuds, a smartwatch, an AI speaker, a portable charger, and a wireless charger.

The earbuds are the focus of the collection. Designed with portability in mind, the two earbuds are both shaped like the letter C and are able to be clicked together to form a doughnut shape.

A dedicated neck strap can be fed through the hole at the centre of the two attached earbuds, allowing the wearer to wear them like a necklace.

Each item in the accessory range has been designed around the earbuds, with the circular shape that they make when locked together being echoed throughout the collection.

When the two earbuds can be clicked into the smartwatch, the charging case and the AI speaker to connect to each device. Music that was being listened to through the earphones via a smartphone can be heard through the speaker by attaching the buds.

The post Nendo designs smartphone that folds down "like an inchworm" to the size of a credit card appeared first on Dezeen.