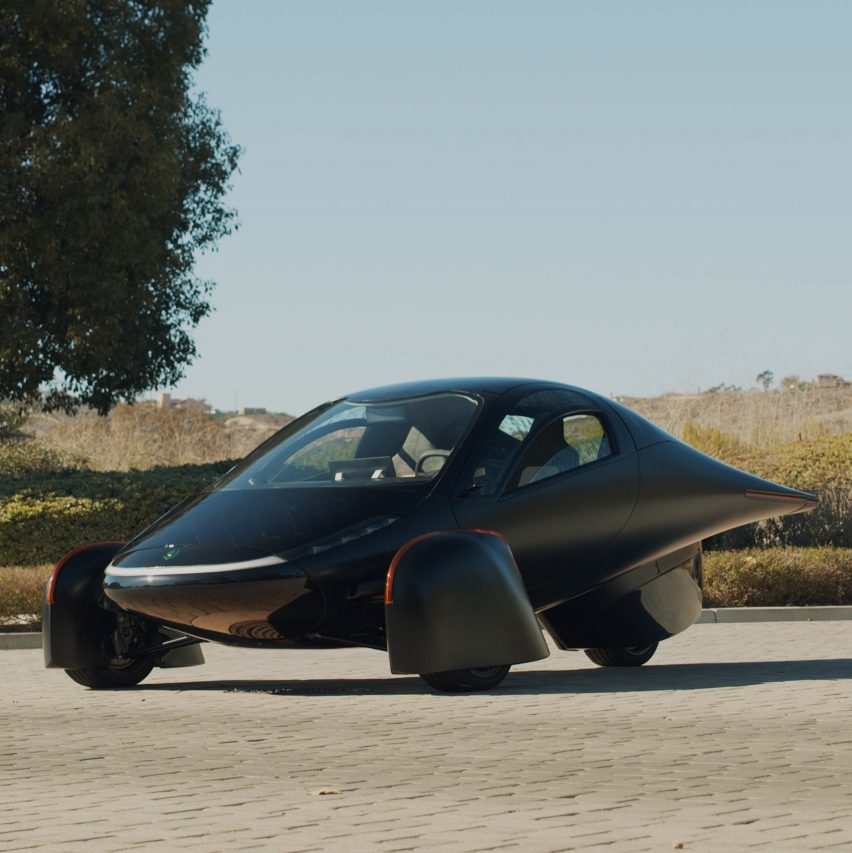 US startup Aptera has developed a solar and electric vehicle with a range of up to 1,000 miles on a full battery, which it claims most drivers won’t need to charge.

The Aptera car is powered by a combination of solar and electric energy – what the company refer to as its Never Charge technology – meaning drivers would be able to complete average journeys without having to stop for more power at charging stations.

According to the San Diego-based company, the average American drives 29 miles per day. Therefore, depending on where the owner lives and how much they drive, they “may never need to charge Aptera at all”.

Measuring at 4.4 metres long, 2.2 metres wide and 1.4 metres high, the three-wheeled Aptera vehicle can accommodate two adults and a pet, according to the company.

While the car can be fully charged via a charging station or cord, when drivers are out on the road during daytime, solar energy from the sun will keep the vehicle topped up.

This solar technology is designed to store enough sunlight to enable the car to travel over 11,000 miles per year in most regions.

The company has a calculator on its website that enables people to enter their location and the amount of miles they drive in a day to determine how many times a year they would need to charge the car.

For instance, if you were located in Britain and drove an average of 25 miles per day, you would need to charge the Aptera vehicle via an electrical cord an estimated 1.46 times per year.

A total of 180 solar cells are integrated into the structure of the car body, and can be configured to provide up to 45 miles of range per day.

The company claims that this makes its Aptera model the first vehicle that is capable of meeting most daily driving needs using only solar power.

“Even though the longest-range Aptera can drive for about 1,000 miles between charge, the reality is that most of our driving is 30 miles or less,” said the company.

“For Aptera, 30 miles consumes about three kilowatt hour (kWh) of electricity. Now, let’s say your commute is 15 miles each way, let’s assume it’s dark when you’re driving to and from work,” it continued.

“While parked at the office on a sunny day, your Aptera could put back in about 4.4 kWh, which is far more than what you’ll use that day. You’ll arrive home with more charge than when you left with. That’s how it works, it’s as simple as that.”

As the car uses less than 100 watt-hours (Wh) per mile for daily trips, it can go an estimated five times further than other electric vehicles with the same-size solar system.

This is mainly due to its lightweight structure, which is made from a composite material of steel and aluminium.

The car is also composed of four parts instead of the average 300 that make up a vehicle, making it smoother as well as more cost-efficient to produce.

This combined with its aerodynamic shape reduces drag to a coefficient (Cd) of 0.13. For comparison, Tesla’s Model 3 has a drag Cd of 0.23.

In addition to this, it has a level two autonomy capability, meaning it can control the steering, acceleration and braking, but the driver must be at the wheel to intervene when needed.

A user interface inside the car informs drivers in real time of ways that they can conserve energy and extend the car’s range.

Back in 2013, students at the Eindhoven University of Technology revealed what they claimed to be the world’s first solar-powered family car, called Stella, which later took part in a photovoltaic-powered race across Australia.

In 2015 the students redesigned the vehicle to run for more than 1,000 kilometres on a single charge and produce enough excess energy to power a TV or washing machine, due to solar panels on its roof and rear.