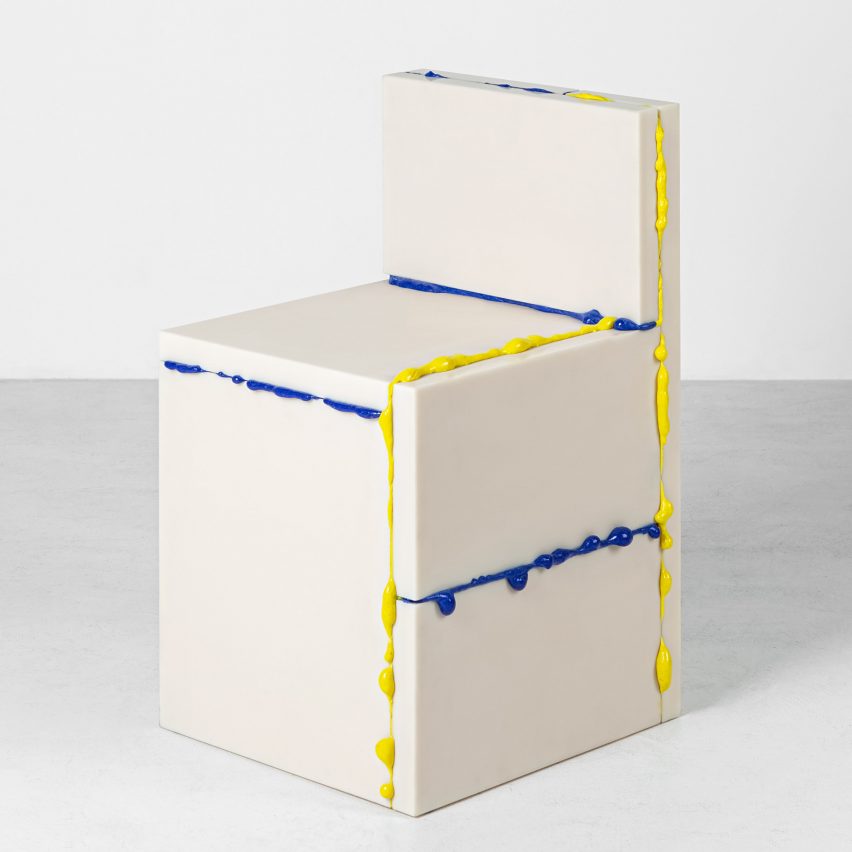 South Korean designer Donghoon Sohn has pressed plastic slabs together like slices of bread for his latest furniture series, allowing primary coloured, recycled binder to bleed from the cracks as if it was melted cheese.

The collection’s name, BSP, pays homage to the classic BLT sandwich and stands for byproduct, solvent and plastic.

Although its Cubist chair, bench and side table consist largely of pure white, virgin plastic blocks, these are held together by acrylonitrile butadiene styrene (ABS plastic) offcuts, which are recycled into a technicolour glue that spills out from the seams.

“ABS is a popular material for 3D printing and CNC milling because it is easy to dye and process,” Sohn told Dezeen.

“Inevitably, a lot of plastic waste is created in the process, which is hard to recycle because it is too tiny, like dust. But these flakes or small parts from failed prints are easy to dissolve in a little amount of solvent due to how large their surface area is relative to their volume.”

According to Sohn, the pieces only take about five minutes to dissolve in ethanol, before they can be mixed with different coloured powders.

From here, the ethanol can easily be evaporated in order to once again solidify the material while pressing it between the slabs.

“Imagine you are grabbing a sandwich with your hand, this is almost the same situation,” Sohn said. “While the melted plastic solidifies, I apply a virgin plastic plate from each side to create the look of melted cheese.”

The resulting, handcrafted furniture pieces embrace spontaneity and happy accidents, even though they were made from mass-produced materials.

Sohn refrained from using any resin or glue in the production process in order to allow the pieces to once again be recycled when they reach the end of their life. Or, in a post-plastic world, he hopes they might become relics of a bygone era.

“In the future plastic may be no longer in use due to environmental issues, so then my work will be limited edition,” he joked.

The designer set up his own Atelier Sohn in 2015, on which he worked throughout his graduate studies at Swiss design school ÉCAL. Before that, Sohn clocked six years as a product designer for South Korean electronics company Samsung.

Rather than covering up recycled plastic or attempting to make it look and perform like virgin plastic, a number of designers have created furniture that hopes to exploit its unique characteristics to create a distinct visual language.

Sydney studio DesignByThem allowed the multicoloured plastic pieces that make up its Confetti collection to remain visible and form a playful, speckled texture, while Plasticiet stretched the material like taffy to create a series of pearlescent seats and storage units.