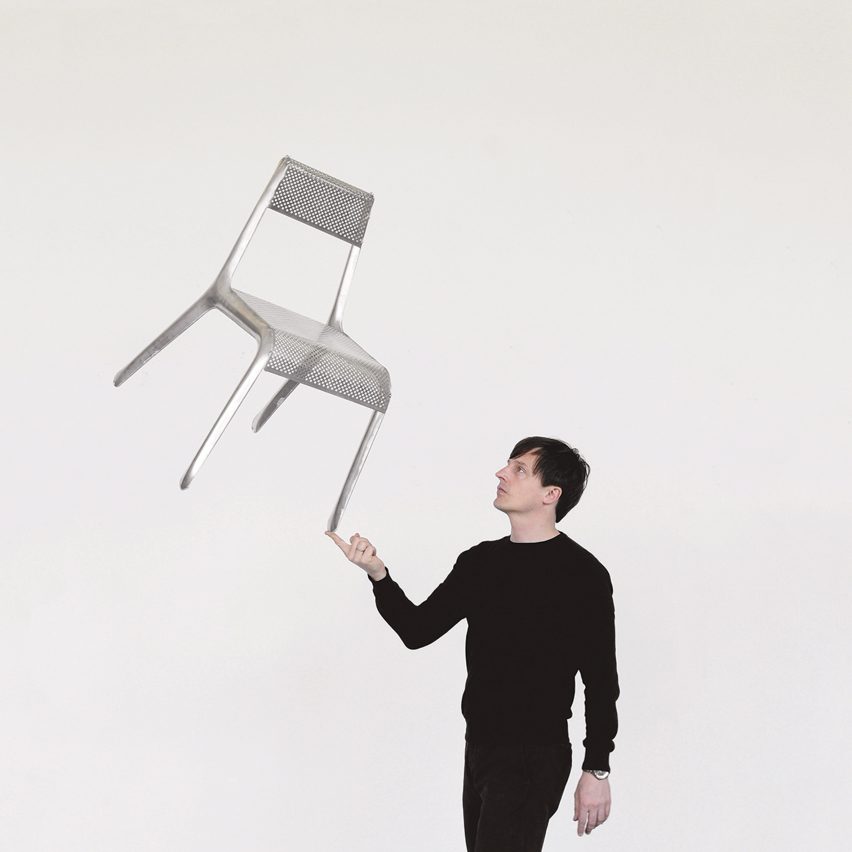 Dezeen Showroom: Polish firm Zieta Studio has developed what it calls “the world’s lightest chair” by welding together aluminium sheets and blowing them up as if they were balloons.

Called Ultraleggera, the seat is an answer to Italian architect Gio Ponti‘s Superleggera, or super-lightweight, chair from 1957, for which he stripped down a traditional Ligurian design to its bare essentials.

While Ponti’s version is made from light yet stable ash wood and weighs 1.7 kilograms, Zieta’s consists entirely of aluminium and comes in at only 1.66 kilograms.

Despite this, it can bear a load of up to 1200 kilograms, which is equivalent to a single pineapple holding up two grand pianos.

“Over a period of several years, every radius and every perforation of the Ultraleggera chair was optimised for lightness and strength,” the studio’s founder Oskar Zieta told Dezeen.

“The final design is the result of material and technological optimisation, as well as strength tests – first virtually simulated, and then carried out in the real world.”

The chair’s strength and stability can be traced back to the way the metal is shaped, in a production process developed by Zieta and known as FiDU.

Previously used by the designer to create a 3D typeface and his Plopp stool for Hay, the method involves cutting a two-dimensional outline of the chair’s frame from two aluminium sheets, which are then welded together and inflated with compressed air.

This creates an h-shaped unit, encompassing two legs and half of the backrest, which is then duplicated and welded together with laser-cut seat and back panels to form Ultraleggera.

“Due to the slight undulations of the material surface, the deformation process creates a three-dimensional, stable bionic structure that is surprisingly durable,” said Zieta.

“As one of the few design studios working with sheet metal, we respect the ‘freedom of deformation’ of this material.”

“We do not force it into the matrix and we do not want to completely control its deformation,” he continued. “It is in this process that unique structures with a high strength coefficient are created.”

According to Zieta, the FiDU method conserves both energy and material when compared to standard production processes.

And as a mono chair, the Ultraleggera chair is made entirely from a single, fully recyclable material, meaning once it has reached the end of its life it can easily be melted down and formed into something new.

Earlier this year, the design was awarded the top prize in the product category at the Materialica Design and Technology Awards.

The post Ultraleggera is an inflated metal chair that weighs less than two kilograms appeared first on Dezeen.