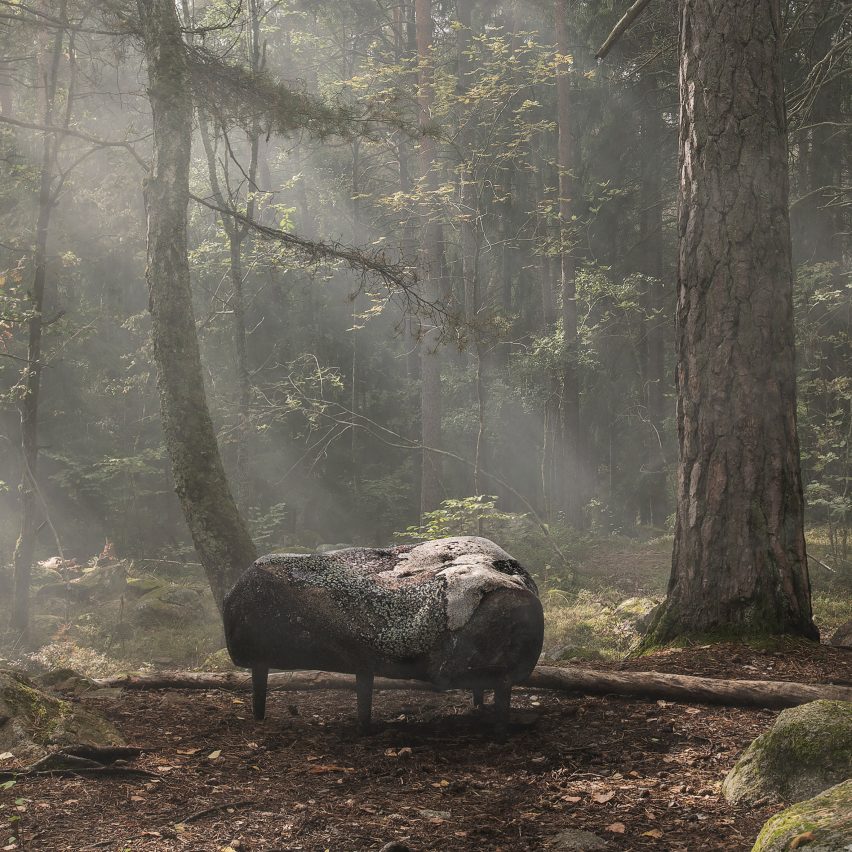 The Design by Nature furniture collection, which comprises six seating objects, is designed to mimic various objects typically found in the wilderness, such as branches and rocks covered with moss, lichen and algae.

Front and Moroso wanted to use the furniture designs to bring elements of the outside, in.

While the six objects function as seating, it is not in the conventional sense, Front told Dezeen. Rather, the pieces are designed to mimic “the way one sits in nature”, encouraging users to climb on top of and lay down on them.

“We wanted the pieces to create the feeling that someone had lifted a whole glade from a forest with a gigantic shovel and moved it to a home,” said Front co-founder Sofia Lagerkvist.

The creators took photos and 3D scans of various rocky woodlands and seaside areas, as well as drew sketches, before using these images to digitally build the six designs.

The wooden furniture items were given their undulating, rocky shapes by a milling machine before being coated in patterned, tapestry-like fabric produced by Dutch textile company Febrik, owned by Kvadrat.

While each of the fabrics feature a dappled design, some are coloured in rock-grey tones scattered with mossy green hues to emulate lichen-covered rocks. Others are knitted from a range of blue yarns to represent rocks beside the sea.

“We documented these places using different techniques, both high tech and traditional,” explained Front co-founder Anna Lindgren. “We wanted to collect both the dimensions and physical properties, but also the experience and atmosphere of nature.”

“There were lots of paintings and drawings, and we 3D-scanned entire areas in different natural settings and used those forms to create the pieces of furniture,” she continued.

The designers wanted to focus on nature when creating the collection because of the positive effects it has on people’s mental and physical health.

“Being close to nature is of course a stress reliever and good for your health. But we are also interested in other strong effects of images of the natural world,” said the designers.

“For instance, there are studies that suggest that people feel good when they see various aspects of nature at the same time. You instinctively understand that there are many ways to survive: you can take fish from the water, you can pick berries and hunt in the forest and fields.”

“This is very basic, a fundamental part of human perception that we are interested in experimenting with,” they added.

Front and Moroso also researched the homes and structures that animals build, how they choose their locations and what “intelligence” can be found in their designs.

The two brands used this research to create a separate but similar collection of objects that will be unveiled alongside the Design By Nature furniture in an exhibition due to take place during Milan design week 2021.

Front also focused on animal-related design when creating the Resting Animals series for Vitra in 2018.

The collection, which includes a resting bear, a curled up cat and a pair of sleeping birds, are made in wool and ceramics and aimed to explore the close connection between humans and figurative objects.