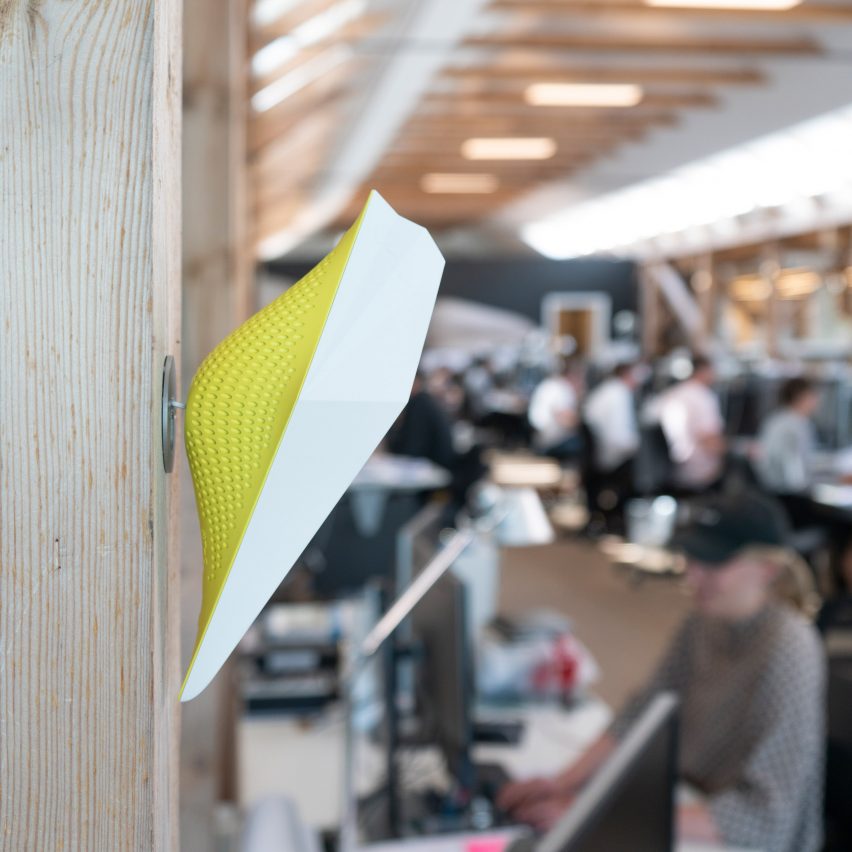 GXN, the innovation arm of Danish architecture studio 3XN, has developed a twittering air-quality sensor that hopes to draw attention to the negative effects of air pollution within our homes and offices.

Called AirBird, it takes the shape and colour of the bright yellow canaries that used to be brought into coal mines to warn workers of carbon monoxide and other toxic gases. The birds were more sensitive to these and would become ill before the miners, giving them time to get out.

Similarly, the AirBird sensor works by measuring indoor carbon dioxide levels, which increase without proper ventilation as humans use up the available oxygen in a room and exhale it as CO2.

Outdoor air generally has a carbon dioxide concentration of around 350 to 400 parts of CO2 per million particles of air, though this varies from area to area and increases in industrial and heavy-traffic areas.

But crowded or badly air-conditioned indoor environments can expose their inhabitants to levels of 1,000 parts per million (ppm), which has been shown to have a negative impact on our cognitive functioning and productivity.

GXN’s solution takes the form of a small, battery-powered device shaped like an origami bird, which is equipped with precise optical sensors that continually measure the temperature, humidity and carbon dioxide in a room.

When the CO2 levels surpass a certain threshold, an algorithm activates a chirping sound or flashing light, designed to nudge the user to improve the air quality by opening the windows or moving to a different space.

“We spend 90 per cent of our time indoors, where we learn, work and live together,” GXN architect and partner Lasse Lind told Dezeen.

“Often, indoor pollution affects us over a long period of time, so we don’t necessarily detect the changes that happen to our wellbeing such as tiredness and a lack of concentration,” he continued.

“Indoor climate is such a key factor in our lives but it’s a tricky matter. It is quite literally the air that surrounds us. So we wanted to make the air around us visible and allow people to act and ensure better air quality for themselves and their families.”

Created in collaboration with sensor specialist Leapcraft and window manufacturer Velux, the AirBird has been tested in a Danish public school for more than a year in order to inform an upcoming renovation.

“The data will be used to help identify opportunities to continuously improve and understand indoor air quality for new business models and valuation of buildings in operation,” said Lind.

Previously, Chinese designer Huachen Xin attempted to make outdoor air pollution visible through an installation in which data gathered by car-mounted sensors was fed into a colour-changing Smog Shade.

In a bid to make this information even more accessible, San Francisco design studio NotAnotherOne has developed a portable air quality tracker that can be attached to bags or clothes.

Called Atmotube, this measures the presence of volatile organic compounds and particulate matter such as dust, soot or mould spores.

The post AirBird is a smart sensor that chirps to highlight indoor air pollution appeared first on Dezeen.