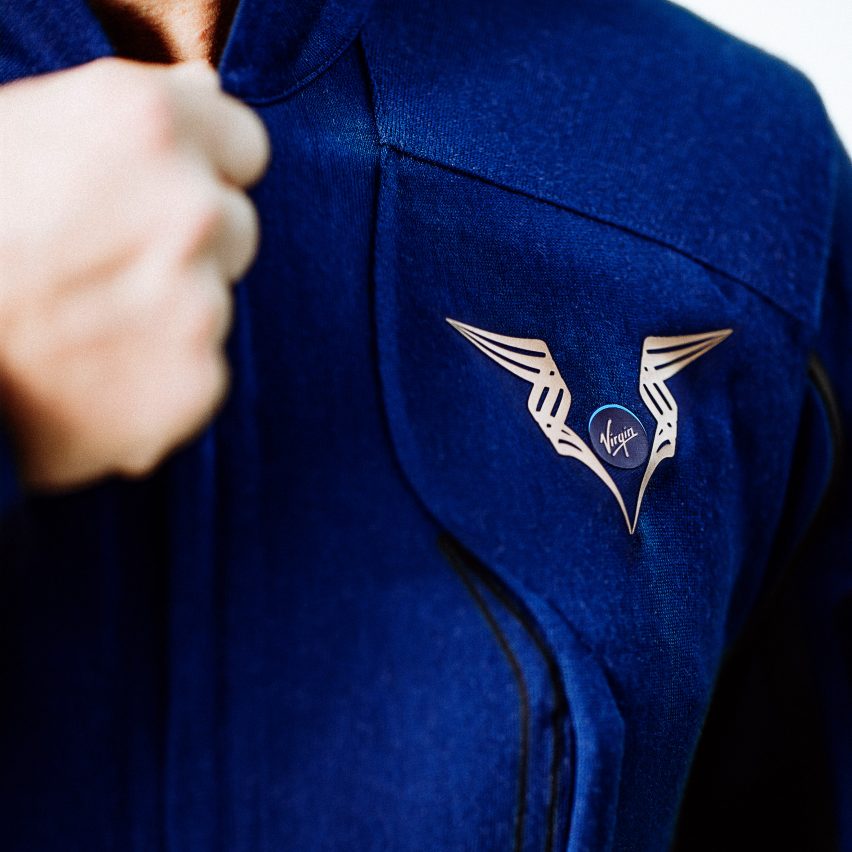 US sportswear brand Under Armour has designed the spacesuits and footwear that Virgin Galactic‘s pilots will wear for its first commercial spaceflight later this month.

According to the brand, the spacesuits are designed to make the pilots feel confident while ensuring they are understated enough to not be distracting.

While each all-in-one suit has been tailored to the pilot it is intended for, they are all made from a royal-blue material with black panels under the arms, above the feet and running along both sides of the body.

The suits are made of tough, flight-grade knitted fabrics that are as lightweight as possible – with each garment weighing just over one kilogram.

Cushioning on the shoulders offers comfort as pilots are held into position by straps when seated in zero gravity. This also serves to support the pilots during boost, when the forces press them back into their seats.

“A pilot’s flight suit has been refined over the decades to embody a certain undeniable look and function, but they also have to perform beyond expectations,” said Randall Harward from Under Armour.

“We took that as a starting point and built in all of the Under Armour solutions we’ve developed for comfort, support, movement and temperature management.”

“Our goal was to build a suit that leaves a pilot – like any athlete – feeling confident and with zero distractions during a critical moment of performance. It’s been a fascinating journey.”

Under Armour was given a brief to create a non-pressurised spacesuit that both reflected the pilots’ role in the space mission and practically supported their task.

Chief pilot Dave Mackay and pilot CJ Sturckow will wear the spacesuits and footwear on future flights, including its first commercial spaceflight that will fly private astronauts – astronauts on spaceflights not conducted by a government agency – into space from Spaceport America in Las Cruces, New Mexico.

This mission is due to take place later this month, with the flight window opening on December 11th 2020.

As Virgin Galactic‘s technical spacewear partner, Under Armour has designed other astronaut apparel pieces for the company, including similar suits designed for private astronauts.

While the garments are visually very similar, it was important for the sportswear brand to set the pilots’ suits apart from those that will be worn by the future astronauts to help highlight the roles they play in the spaceflight.

“A common colour palette accentuates the fact that pilots and customers are all part of one crew. But the addition of black within the pilot spacesuits, sets the pilots a little apart and is a reminder that the destination of each flight is the black sky of space,” Virgin Galactic said.

Under Armour also created the 3D-knitted covers for the seats in the interior cabin of the Virgin Galactic SpaceshipTwo craft, which was designed in collaboration with London studio Seymourpowell.

The craft will be designed to take six passengers on a sub-orbital flight into space to view the Earth and experience several minutes of weightlessness at $250,000 per seat.

Ten opinions on how the pandemic will change the world