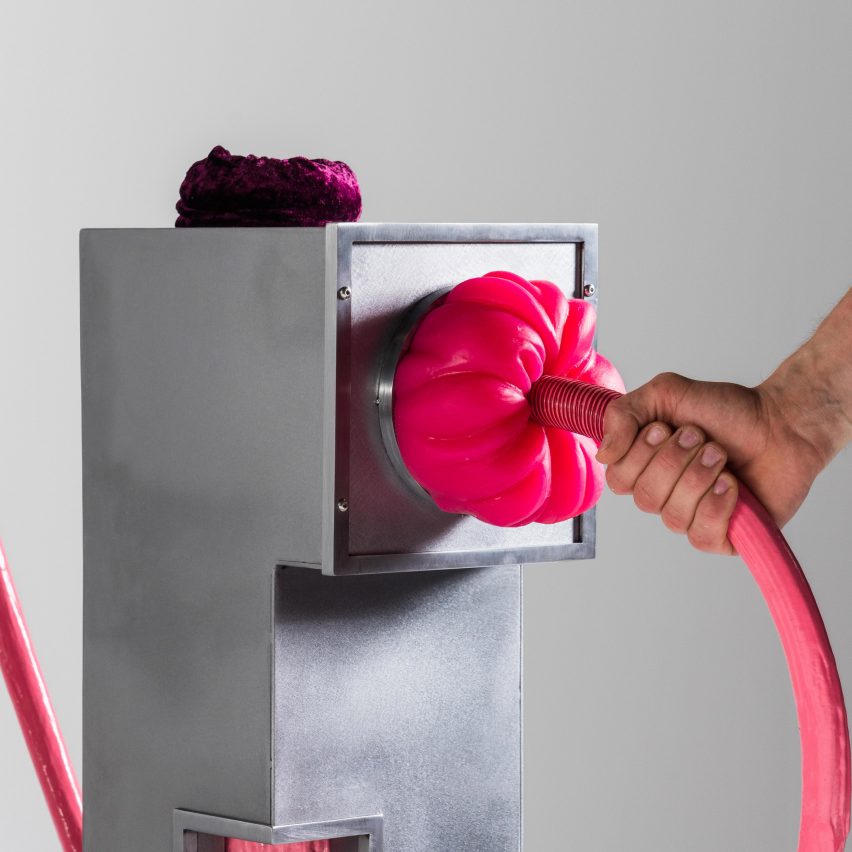 New York designer Brecht Wright Gander has created a light that is switched on by sliding a phallic conductor inside of a puckered, rubber opening, in the hopes of maximising the user’s feelings of discomfort.

This elaborate structure serves to highlight its functioning as a kind of Rube Goldberg machine, which performs a simple task in a needlessly convoluted way.

A fleshy, pink chord extends from the central pillar and rests inside of a velvet sleeve on top of the adjacent column, reminiscent of a gas pump at a petrol station.

Removing it from its holder and repeatedly inserting it into the orifice on the side illuminates a spherical bulb perched atop the third, and tallest metal post.

“There is a capacitive sensor inside the orifice,” Gander told Dezeen. “This sensor responds to the electrical charge in the user’s skin, which is transmitted through a copper wire embedded in the umbilical.”

“So the biological charge of the user triggers the light,” he continued. “The human metabolic process literally has to converge in mutualism with the object’s own processes, in order for illumination to occur.”

Peeking out from strategic holes in the lamp’s metal shell are its innards, coated in the same “sensuously fleshlike” rubber as the orifice.

“The steel shell imprisons or perhaps protects the inner body – inhibiting it from pursuing a larger life, or perhaps shielding it from whatever other advances might be made on it,” Gander explained.

“The material selections are meant to maximise the tension and uncertainty a person feels on contact with the lamp. In every way, operating the light is designed to cause the user anxiety and discomfort. It may even be embarrassing to use the lamp in front of other people.”

In this way, the design is intended to question the ideals of functionalism and the notion that a good object should always be subservient to the needs of its user.

Instead, Gander said follows a philosophy similar to that applied by Tadao Ando in his Azuma House (1976) – a concrete residential building in Osaka, which features an open courtyard that the residents must weather in order to reach their kitchen, bathroom and bedroom.

“On the one hand, he has produced a magnificent annoyance,” Gander explained. “But besides this inconvenience, there is a terrible gentleness towards material. Rather than collapsing matter to clad a consumer’s desires, the architecture insists on its independence.”

“The residents then cannot simply be parasitic users, extracting what they want from their building,” he continued. They have to continually respond to it – and it continually says different things.”

“Ando’s design also suggests that if concrete could speak to us, it isn’t likely to speak about human convenience because the world is more than material waiting to be useful.”

The first is carved and inlaid with techniques that are usually reserved for musical instruments, while the second weighs just over half a tonne thanks to the concrete swirls that cover its exterior, in a nod to the material’s original, liquid state.

Among the other artists featured in the show are American expressionist painters Robert Motherwell and Helen Frankenthaler alongside seating made from piles of stuffed animals as part of the Kaws and Campanas collaboration.

Photography is by Simon Leung and the top video by Studio Oiseau.

Chapter One is on view at Room57 Gallery in Manhattan until 14 February 2021. See Dezeen Events Guide for an up-to-date list of architecture and design events taking place around the world.

The post Brecht Wright Gander designs lamp with rubber orifice that lights up when "turned on" appeared first on Dezeen.

Droog presents the face mask as a flirtatious fashion statement