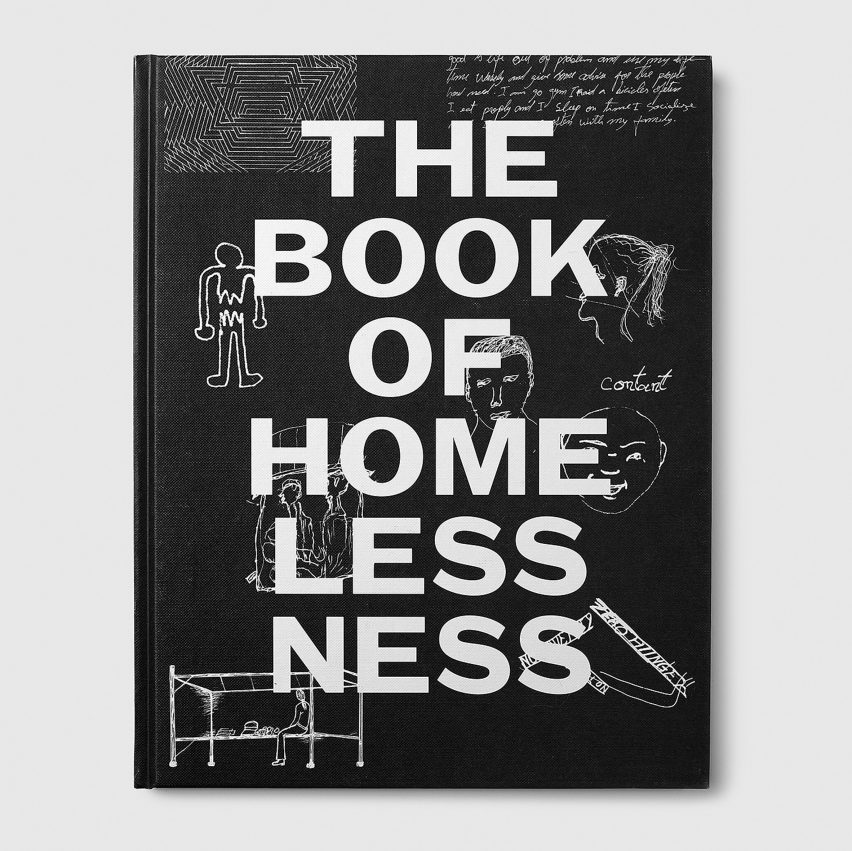 London charity Accumulate has released an “honest, painful and revelatory” book telling the stories of 18 different people and their experiences of homelessness.

Over 160 pages, The Book of Homelessness incorporates collages, illustrations, comics, poems and prose, all created as part of a three-month course organised by the charity.

Through workshops in everything from creative writing to drawing and sequencing, hosted at Shoreditch’s Autograph Gallery, Accumulate aimed to allow people affected by homelessness to take control over telling their own stories, on their own terms.

“When you are excluded and marginalised from society, control is taken away from you,” Accumulate founder Marice Cumber told Dezeen.

“If you’re homeless and living in a hostel, your breakfast is at a certain time, your dinner is on a rota so you can’t even choose what you’re eating,” she added. “You’re living on such a small budget that you can’t choose to do anything and you don’t have a voice. So it was really important to me that this is their story and they have the right to tell it.”

The result is what Accumulate describes as “the world’s first-ever graphic novel created by people affected by homelessness”.

Using a range of different mediums, this serves to reveal the multiplicity of experiences, which are hidden behind the blanket term of “the homeless”.

“You have people that were leaving abusive relationships and people who were fleeing countries, where they were threatened with torture,” Cumber said.

“Others were being rejected from their home or suffering violent attacks because of their sexuality. But the thing that runs like a river through the whole book is that everybody was escaping or fleeing from something.”

One of the stories that particularly struck her is that of Chris Fox, which is illustrated in the book through simple, pencil-drawn comic strips with accompanying text.

“He had a very abusive stepfather, who chucked him out of his home. He was pleading with his mother to let him come back in the house but she wouldn’t let him. He ended up in a tent and got into heroin,” she explained.

“It’s not an easy read. All the stories are very honest, painful and revelatory.”

The book itself was laid out by publisher and graphic designer Patrick Fry using a simple, monochrome palette punctuated with bursts of colour in order to allow the stories to remain the focal point.

Meanwhile, scale and font vary throughout, in order to pull out poignant abstracts and visuals while playing up the DIY, bricolage feel of the publication.

“It’s not flippant, it’s not trendy,” said Cumber. “It’s very matter of fact, good, honest design. The book holds people’s life stories, so it needs some gravitas to it.”

The workshops, as well as the printing of the book, was entirely crowdfunded. All profits from the sale of the publication will ultimately be shared between the authors and fed back into The Accumulate Art School for the Homeless.

Here, the charity provides higher-level creative education for people who are experiencing homelessness, with the aim of increasing their sense of self-worth and potential for employment.

Since 2016, Accumulate has also helped eight students progress onto degree courses at a university through its scholarship scheme and the hope is that sales of the book will help to fund another bursary.

According to Cumber, the graphic novel has not just had an impact on those who made it but also on those who have purchased it so far.

“It’s been a really educational process for them to understand the variety of stories that people have. It’s not just the druggie, the alcoholic, the lazy person that doesn’t want to work,” she explained.

“A lot of people have written to me and said: ‘I now recognise how privileged I am. I’ve got a supportive family, I live in a nice place.’ So they’ve also learnt a bit about themselves and how they see their own lives.”

Last year, London architecture firm Hildrey Studio developed a database called ProxyAddress, which provides homeless people with an address for one of the more than half a million houses that are currently standing empty in England.

With this, they can register for a bank account or apply for a job until they have found more permanent accommodation.

Meanwhile, Shelter from the Storm and Holland Harvey Architects transformed an abandoned supermarket in Islington into a 42-bed shelter, complete with integrated cafe.

The post The Book of Homelessness is the first graphic novel created by homeless people appeared first on Dezeen.