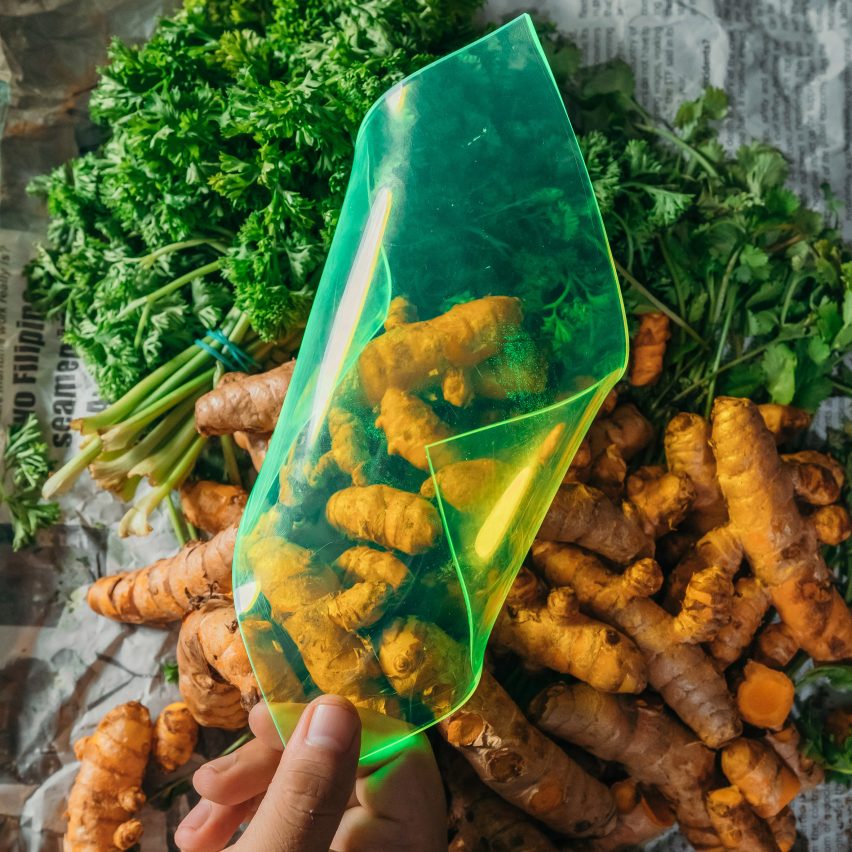 Engineering student Carvey Ehren Maigue has been named the James Dyson Awards first-ever global sustainability winner for his AuReus system, in which waste crops are turned into cladding that can generate clean energy from ultraviolet light.

Unlike traditional solar panels, which only work in clear conditions and must face the sun directly because they rely on visible light, the translucent AuReus material is able to harvest power from invisible UV rays that pass through clouds.

As a result, it is able to produce energy close to 50 per cent of the time according to preliminary testing, compared to 15 to 22 per cent in standard solar panels.

When applied as a kind of fluorescent covering to windows or facades, AuReus can capture UV rays bouncing off of pavements and the surrounding architecture, turning entire buildings into vertical solar farms.

This maximises the amount of energy that can be generated.

AuReus takes its name from the aurora borealis and is inspired by the physics that power the northern lights. Luminescent particles in the atmosphere absorb high energy particles like ultraviolet or gamma rays, before degrading and reemitting them as visible light.

Similarly, Maigue’s system uses luminescent particles derived from waste agricultural crops. To pull out the bioluminescent particles from specific fruits and vegetables, Maigue goes through a process of crushing them and extracting their juices, which are then filtered, distilled or steeped.

The particles are suspended in resin before the resulting substrate is moulded into cladding and clamped onto walls or sandwiched between the two panes of a double glazed window.

These particles convert UV light into visible light, which is reflected to the very edges of the panel.

“The light relies on internal reflectance of the material to self-correct and guide itself towards the emitting edge,” said Maigue, who is a student at Mapua University in the Filipino capital of Manila. “This can be controlled by specific laser etching patterns
as well.”

This visible light can then be captured and converted into electricity by a string of regular photovoltaic (PV) cells, like the ones found in regular solar panels, which fringe the outside of the cladding.

With the help of integrated regulating circuits, this electricity can then either be stored or used immediately.

“In that way, it can be directly used as a stand-alone or can be connected in groups to produce a higher output,” he told Dezeen. “It can also be easily integrated into existing solar photovoltaic systems since its electrical output is suitable for such systems as well.”

The crops used are sourced from local farmers, who have been affected by severe, climate change-induced weather disruptions.

Around a quarter of people in the Philippines rely on the agricultural sector for their employment but due to global warming, the industry is being affected by more frequent and extreme weather events, which damaged more than six million hectares of crops between 2006 and 2013, worth an estimated $3.8 billion.

By repurposing some of the crops that were rotting on the fields, Maigue makes use of an untapped waste stream and gives farmers a way to monetise their lost yield.

“Combatting climate change is a journey that will need several generations to complete. This means great products alone would not suffice,” the engineer said.

“In the conception of AuReus, I aimed to create a future-facing solution in the form of renewable energy and at the same time integrate a present-day value-creating solution for our farmers, who are being affected negatively by the present-day effects of climate change,” he continued.

“In this way, we can show people that adapting sustainability to fight climate change is something that can benefit both the present and the future generation and in doing so, we can rally more people in this fight against climate change.”

Moving forwards, Maigue plans to turn the AuReus substrate into threads to form fabrics and curved plates to be attached to vehicles and aircrafts.

The Sustainability Award is a new addition to the annual James Dyson Awards, equal to the competition’s top prize.

This year’s international winner was Spanish engineer Judit Giró Benet and her at-home breast cancer testing kit. Both she and Maigue take home £30,000 to fund the further development of their projects.

Among the 2020 national winners was the UK’s Tyre Collective, with a wheel-mounted device that can capture microplastic emissions from car tyres, and an artificial voice box by Japanese engineer Takeuchi Masaki that can mimic the wearer’s former voice.

Images and videos are courtesy of The James Dyson Foundation.