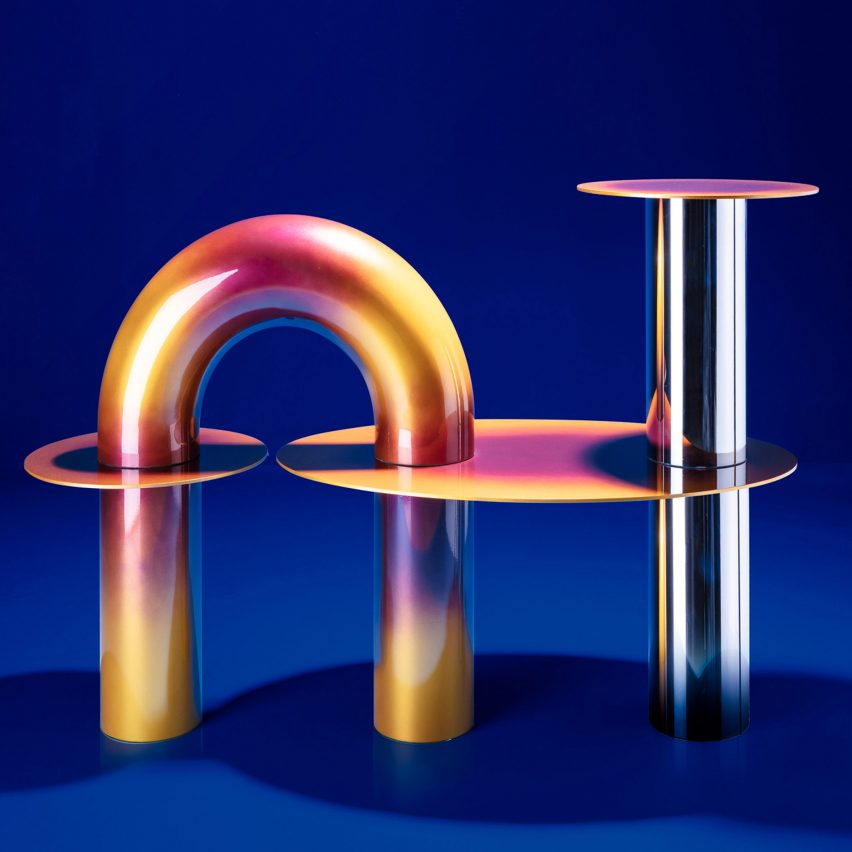 Thirteen designers made products from a wide variety of metals – including bronze, steel and aluminium – but stayed away from brass for the Brassless: New Accords for the Metallic Wave exhibition at Nilufar Gallery in Milan.

Studio Vedèt, which curated the show for this year’s Milano Design City event, wanted to move away from the ubiquitous brass trend.

According to the curators, brass’ return to design was widely heralded in 2017. Studio Vedèt said this is usually a sign of the decline of a trend – something the studio intends to accelerate.

“Just as in the previous episodes of FAR — the parasitic curatorial entity that lives within the spaces of Nilufar — Brassless marries a challenging accent to the characteristic language used in the established Milanese gallery,” Studio Vedèt’s Valentina Ciuffi, who curated the show for Nilufar’s FAR, explained.

“With a light but decisive statement, it aims to accelerate the ending of the brass era, or rather, the ending of a phase in which contemporary design and architecture abused this alloy by using it randomly or needlessly.”

The show was an attempt to move away from the design industry’s preoccupation with brass to instead investigate the use of other metals. Designers taking part used steel, copper, gold, lead, aluminium, nickel, bronze and silver for their projects.

“Brassless is not a ‘stop to brass’ but rather a denunciation of the decade of trends and an effort to prevent the very thing we need the least – a new homogenous trend spreading designed matter at random over our tired world,” Ciuffi added.

Most of the studios taking part in Brassless chose their own metal to work with, with one – Icelandic designer Anna Diljá Sigurðardóttir – even avoiding metal completely to instead use sulfur for her project.

Her Earthly Delights is a series of sculptures made from sulfur that has been shaped and solidified in water, and aims to display the “passing of time through an accelerated recreation of a slow, natural process,” Studio Vedèt said.

Objects of Common Interest used chromed and painted metal with magnetic surfaces to create its Daydream freestanding shelving, which functions as a kit-of-parts that can be assembled and disassembled.

The playful shelves are silver-coloured or painted in warm red and orange hues and consist of a plate, an arch and a pole which can be combined in many ways to create unique shelving systems in different sizes.

Aluminium was chosen by Bram Vanderbeke and Wendy Andreu for their X series, which is also based on a modular system but uses folded metal sheets.

Each module is folded in two directions to create structural integrity, and can be connected to the others with bolts and screws to create shelves and side tables.

The designs that closest emulated brass were Carlo Lorenzetti‘s lamps, called Indoor Snail and Goosefish, which were made of bronze using wax casting.

“Both works were produced using a hybrid method of digital design and iteration in the initial stages, followed by the entirely old-world methods of lost wax casting and hand work for the finishing,” Studio Vedèt said.

“The resulting forms combine contemporary methods of creative conception and ancient techniques that have existed for millennia.”

Pieces from the Older with Alexander Vinther show, which was also curated by Studio Vedet, were also showcased at Brassless.  They included its minimal stainless-steel frame Zhora chair, which traces the outline of a figure on the run and is named for the replicant Zhora from Blade Runner.

Milano Design City saw showrooms, galleries and various other venues in Milan open their doors to visitors during two weeks in September and October. The initiative was organised by Fuorisalone and Design City Edition after Salone del Mobile had to be cancelled due to the coronavirus pandemic.

Fuorisalone also set up a virtual showroom during Milano Design City to enable “virtual visits” to the design showrooms.

Dezeen recently revealed that Salone del Mobile could take place in September in 2021, rather than its customary April slot. This would mark the first time the design event has been staged in autumn since 1989.

Brassless took place from 29 September to 10 October during Milano Design City. See Dezeen Events Guide for an up-to-date list of architecture and design events taking place around the world.