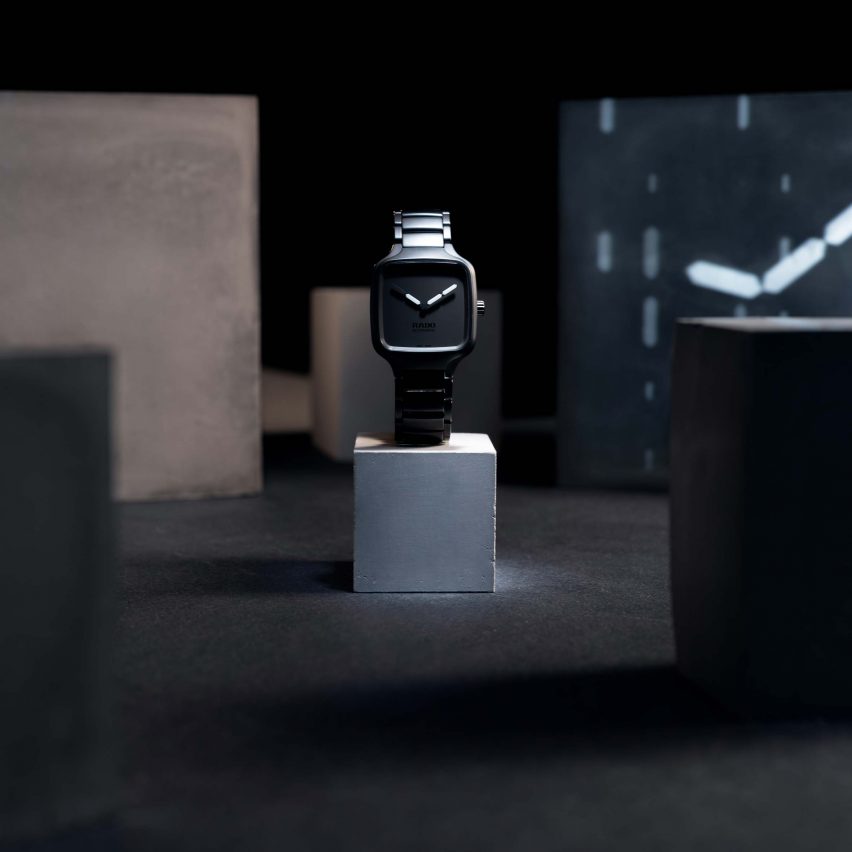 Japanese design duo YOY celebrates the futuristic feel of the 1980s with the True Square Undigital, one of four new watches set to launch during Rado Design Week on Dezeen next week.

Working with Swiss brand Rado, Tokyo-based designers Naoki Ono and Yuki Yamamoto have created a watch that is analogue in function, but has the appearance of a digital watch.

Here, the angular bars used in the seven-segment displays of digital watches are instead used to form the hands of a clock face.

These elements are bright white, while the rest of the watch is black, allowing them to stand out. This creates a bold aesthetic, akin to the futuristic designs that dominated in the 1980s.

Simple yet clever, the design is typical of YOY‘s work. Since founding their studio in 2011, Ono and Yamamoto have become known for their novel approach to product design.

With the motto, “between space and object”, the pair like to place as much focus on the context of their work as they do on the objects themselves.

Among their best-known designs are Canvas, a chair that looks like a two-dimensional artwork, and YOYLight, a lamp that uses projected light to create the impression of a shade.

The True Square Undigital is the duo’s first watch design. It launches next week as part of Rado Design Week, a week of virtual content hosted exclusively on Dezeen from 30 November to 4 December.

Along with its unique digital-style display, the watch also features the square-shaped face that has become iconic for Rado, and which characterises all the watches in the brand’s signature True Square collection.

A monobloc construction incorporates a modern mechanical movement but still keeps the watch super-slim, at only 9.6 millimetres high.

The back of the watch is made from PVD-coated titanium, while the matt black bracelet is made from Rado’s high-tech ceramic, making it both durable and lightweight.

A Super-LumiNova finish on the display ensures the watch is just as functional at night as by day.

“This watch is truly smart. And absolutely undigital,” said Rado.

True Square Undigital is one of four new True Square watches by designers including YOY, Tej Chauhan, Formafantasma and Thukral&Tagra for Rado.

More details about all the watches will be unveiled during Rado Design Week, when Dezeen will broadcast a video about each watch as well as live interviews with Rado CEO Adrian Bosshard and each of the designers involved. Click here to see the schedule.

The post YOY blurs the line between analogue and digital with watch for Rado appeared first on Dezeen.