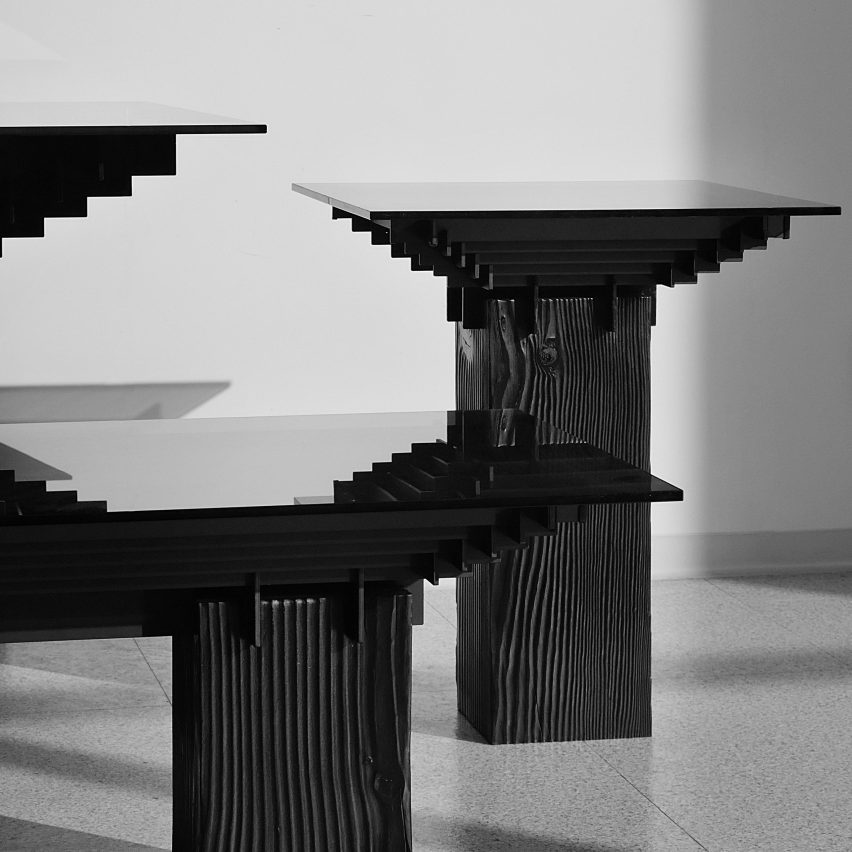 Gridded sheets of steel support thick beams of blackened-timber for these Lin tables by Studio Shinyoo, whose bases have been burned three times over.

Each table in the one-off Lin furniture series comprises a solid timber base whose top section has been cut multiple times in straight lines to form a grid.

The timber is then burnt three times in order to grant it its black finish. In between each firing, the designers brush away any loose grains to ensure the base remains stable.

Sheets of steel are then slotted into these incisions and stacked on top of one another in a grid-like formation. Grooves in the steel enable each sheet to sit at the same level.

Finally, the tables are topped with a pane of tinted-black glass.

In addition to ridding of the need for any glue or nails, the crossed steel frame also ensures that the natural wood doesn’t warp and lose its shape over time, and works to evenly distribute the weight of items on the tabletop.

Studio Shinyoo likens this gridded structure to the repeated lines of trees in a forest. The collection takes its name from this idea, and is a combination of the Chinese word 林[lin], meaning “forest”, and the English word “line”.

As the designers told Dezeen, this grid-based joinery method is based on the beam-column design that was originally used to build roofs in Ancient Greek and traditional east-Asian architecture. The timber acts as the beam structure while the steel frames serve as the columns.

“If we think about the origin of the table, the table was a ground before it was elevated. The elevated ground needed to be fixed at a seating height for comfort. Then there were legs to maintain its height and finally, it became a table,” said the studio, which is based in Sweden and South Korea.

“This process is very similar to how humans built a house for the very first time as protection to protect them from the burning sun, cold rain, snow and even predators,” it continued.

“Regardless of east and west, humans developed the beam-column structure because they needed a roof. The universal intersection of furniture and architecture is discovered right here.”

“Despite the culturally distinct characteristics of Ancient Greek and Asian architecture, we can find a universality inside of it through the beam-column structure,” the studio added.

The studio aimed to demonstrate that furniture can be manufactured with little energy consumption when creating the side and coffee tables. The tables use slot-like joineries to minimise material waste, while the timber is sourced from within a 10-mile radius of the place of production.