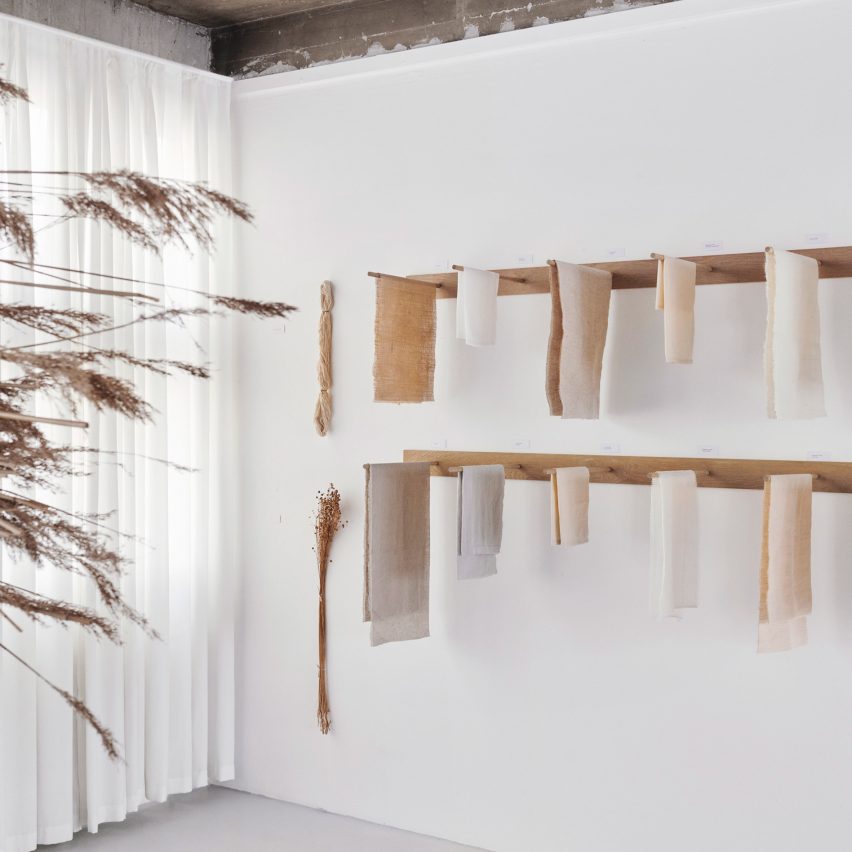 Danish designer Sara Martinsen has explored the vast potential of plant fibres in the world of architecture and design at her Phytophilia exhibition at A Petersen in Copenhagen.

Martinsen has spent the past year building an archive of plant fibres, and learning about their possible uses in design and manufacturing.

The result is Phytophilia, an exhibition showcasing over 20 of these different fibres. Some of them are familiar, like bamboo and sisal, while others are more obscure, such as water hyacinth and kapok.

The designer hopes to start a conversation about the role some of these materials will play in the future, as manufacturers face increasing pressure to move towards sustainable methods of production.

She was motivated to start the project after struggling to find information about sustainable materials and processes for her own furniture designs.

“It was always hard to get the full insight from farming, production, transport, construction, etc,” she told Dezeen. “Therefore I chose to start from scratch, collecting all the fibres and all the facts about the plants I could find.”

“The process has changed my view on nature, and how we as designers and consumers always expect to get something out of nature,” she continued.

“All species have a role, otherwise they would not be here. But if we as humans can’t turn them into something useful, we disregard this role and their raison d’etre.”

Phytophilia is on show in Bygning A, the exhibition gallery on the first floor of the A Petersen furniture showroom.

It showcases fibres in five different states: preserved in a herbarium; dried and debarked; degummed and ready to spin into yarn; as fabric samples; and as building materials ready for use.

The exhibits include various plants best known in agriculture, but which also offer a range of other applications, such as banana, pineapple, soybean, okra and corn. Other plants are better known for other uses, such as loofah and hemp.

“The intention is to give a better understanding of the plant fibres and their qualities,” explained Martinsen.

“Not all fibres are suitable for yarn,” she said. “Some of them should be left as raw fibres and used for building material, reinforcement of concrete or insulation.”

She points to Kenaf as an example – this plant, which is native to tropical and subtropical Africa and Asia, can grow to a height of six metres. It is traditionally used to make rope and rugs, but more recently has been used as insulation in the walls of buildings.

Martinsen hopes the exhibition will raise greater awareness of the potential of natural fibres, particularly as an alternative to polluting materials. Furniture and fashion are two of the industries she suggests could benefit.

“This knowledge used to be passed on from generations, but the volumes and distance in modern production methods leaves us as consumers without a clue of what to look for and what to avoid,” she added.

Phytophilia opened on 22 October and continues until 20 December at Bygning A. See Dezeen Events Guide for an up-to-date list of architecture and design events taking place around the world.

Photography is by Kristian Holm.