Mississippi votes to officially adopt In God We Trust flag 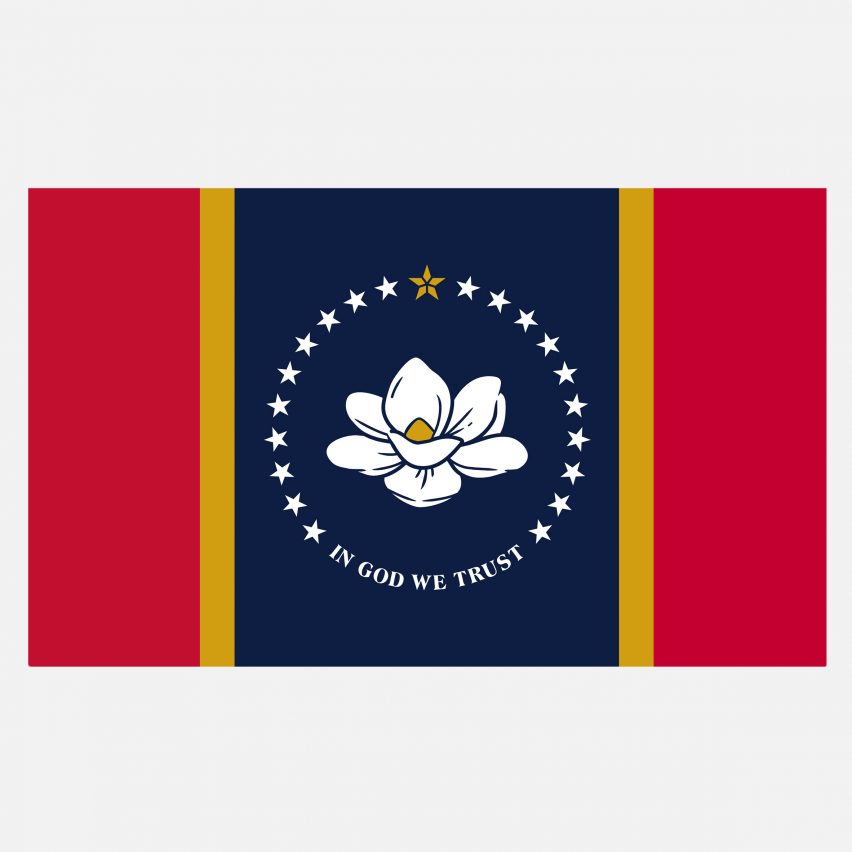 People in Mississippi have voted to replace the state’s official flag, which incorporated the Confederate battle emblem, with a design that has a magnolia blossom in its centre.

Designed by Rocky Vaughan, with support from Sue Anna Joe, Kara Giles and Dominique Pugh, the new flag is called In God We Trust.

It replaces the state’s previous flag, which was retired in June 2020 following increased pressure to remove Confederate symbols from official places after the death of African-American George Floyd in police custody.

Mississippi was the only US state that was still using the Confederate emblem in its flag, which had been in use since 1894, after Georgia removed the symbol from its flag in 2003.

The design was chosen from nearly 3,000 submissions made to The Commission to Redesign the Mississippi State Flag.

It contains a white magnolia blossom – Mississipi’s state flower – at its centre, which recalls the state’s original flag that was used between 1861–1865 and incorporated a magnolia tree.

The blossom is on a blue background and surrounded by 20 white stars that represent the fact Mississippi was the 20th state in the union along with one gold star to signify the state’s indigenous peoples. Below the blossom are the words In God We Trust – the official motto of the United States of America.

This arrangement is on a blue background, which is flanked by a pair of gold bars and wider red bars.

According to website Quartz, the design incorporates elements from several designers.

Vaughan, who works as creative director of a screenprinting shop in Mississipi, was responsible for the broad layout; Joe, a web designer in San Francisco, the central arrangement; Pugh, a graphic designer, helped with the layout; while Giles, a member of the redesign committee, added the gold bars.

The design was selected by the nine members of the flag commission before being ratified by voters in a state referendum on 3 November held as part of the general election.

In the referendum, 71 per cent of people voted that the design should become the official Mississippi state flag.

The decision to redesign the flag after 126 years marks a changing attitude towards the Confederate battle emblem, as several previous attempts to change the state’s flag had failed.

At a previous referendum held in 2002, 64 per cent of people voted to retain the existing flag. Another unsuccessful attempt was made to remove the Confederate symbol from the Mississippi state flag in 2015 after the racially motivated Charleston church shooting.

Image courtesy of the Mississippi Department of Archives and History.

The post Mississippi votes to officially adopt In God We Trust flag appeared first on Dezeen.