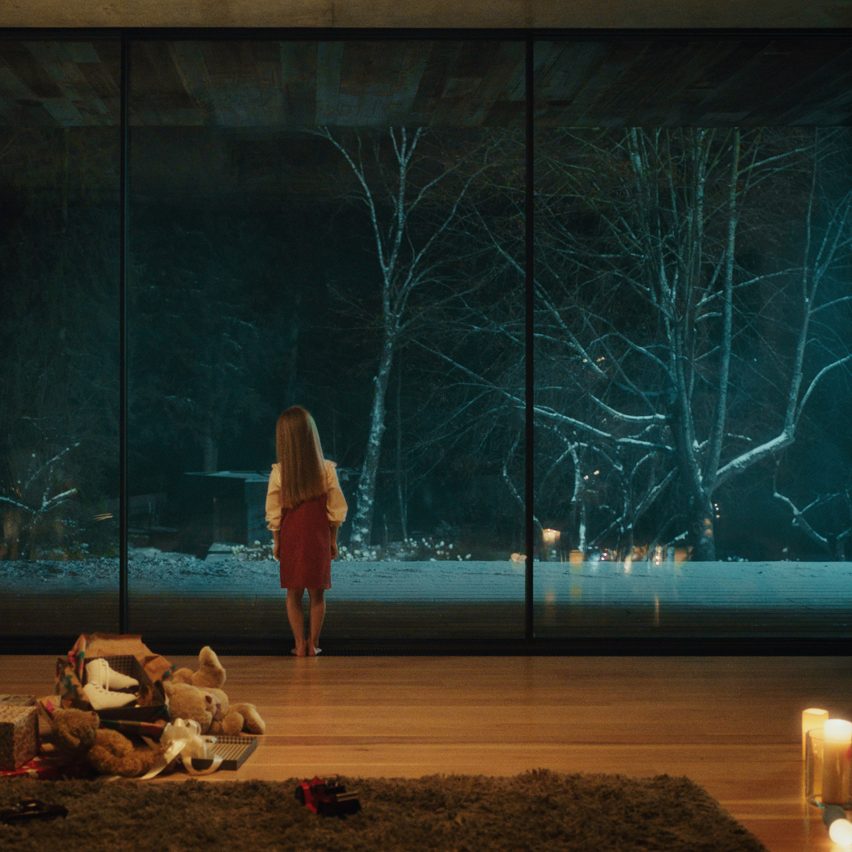 Dezeen promotion: a cosy family home nestled in a snowy forest just outside Moscow is the setting for the latest film released by Sky-Frame, which showcases the Swiss window company’s Classic collection.

The short film – which is titled Living with Sky-Frame: Moscow – takes place on a wintry evening in the Russian capital, opening with a shot of a family home surrounded by a dense thicket of snow-capped trees.

The house comprises two rectilinear volumes. Both the lower and upper volumes are fronted with floor-to-ceiling windows from Sky-Frame’s Classic collection.

The glass windows are set within aluminium frames that are designed to sit flush against the floor and ceiling. Should users want to let in fresh air or gain access to the outdoors, the windows can easily be slid back as the frames have been finished with minimum rolling resistance.

Draining can be done via a recessed channel in the frame system or can be discretely fitted beneath outdoor floor coverings.

As the film progresses we see the family host a birthday party for their young daughter, who looks out through the window to see dream-like scenes in the home’s garden.

“In the hectic pace of everyday life, we all too often lose the desire to look at things in a new way,” explained Sky-Frame.

“Children see things clearly… ultimately, it is this vision that removes the boundaries between outdoors and indoors, bridging the distance between the routine and the fantastical.”

This is one of several short films made by Sky-Frame, which was founded in 1993. At the beginning of this year, the Swiss company filmed an interview with Danish architect Bjarke Ingels, founder of firm BIG.

Speaking from his houseboat that’s moored on the Port of Copenhagen, Ingels mused on the idea that architects have the capability to make the world more utopic.

“Every time you are making an architectural project, intervening somewhere, you have a chance to make this fragment of the world more like your ideal world,” he explained.

Another film by Sky-Frame features the architect Stephan Hürlemann, where he stresses the importance of sustainability and moving away from industrial production methods.

“If we are to secure the future of our planet, we have to change,” Hürlemann stated.

To find out more about Sky-Frame or its Classic collection, visit the company’s website.