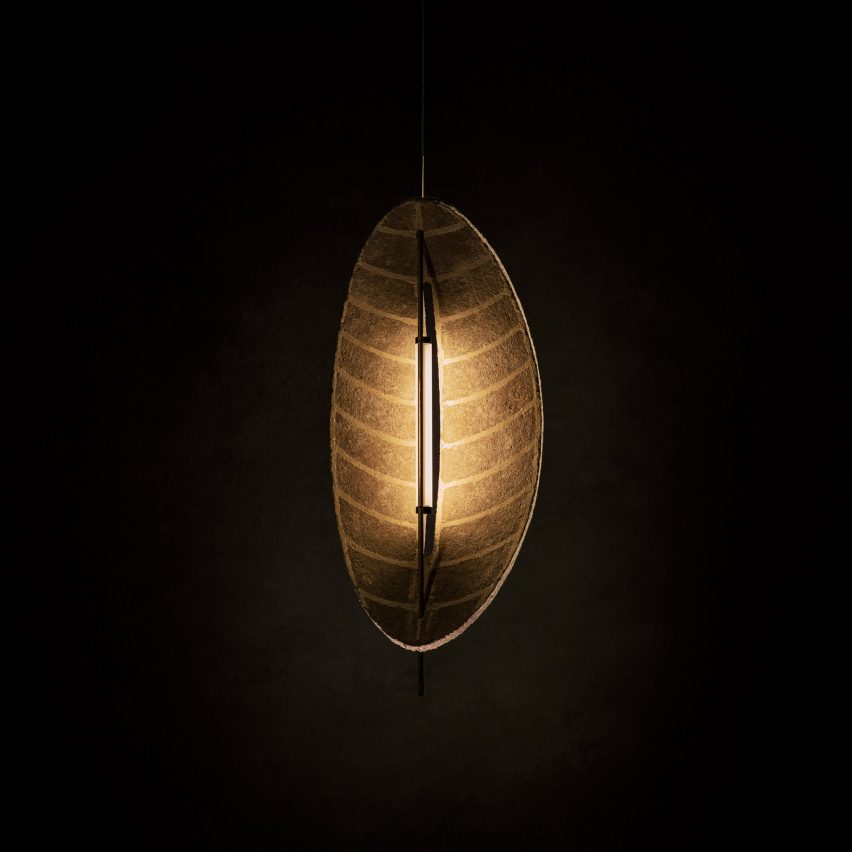 Morgan Ruben drew on nature when growing his leaf-shaped Folium light from mycelium and designing his Luminosa lamp to reference the way bioluminescent worms attract prey.

The Utrecht-based designer’s work combines technology, design and biology, themes which come through clearly in his two latest lighting designs.

Folium isn’t just informed by nature but takes the concept one step further by incorporating mycelium – a living organism that is the roof system of mushrooms – as a material.

Ruben had never worked with mycelium before Folium but had followed the development of its use in production for some time.

To create Folium, he grew the material in a leaf-shaped aluminium cast mixed with hemp fibre.

“Mycelium grows in between the hemp fibres and transforms it into a solid mass,” Ruben told Dezeen.

If grown for longer, the mycelium would produce actual mushrooms, so Ruben heats the material at a low temperature to stop the growth. LED-lights then complete the fluid Folium design.

His Luminosa lamp aims to combine our screen-based, technology-focused everyday life with people’s desire for a closer relationship with the environment.

The result of Ruben’s fascination with the Arachnocampa luminosa, the New Zealand glow-worm, the Luminosa uses sensing technology that recognises hand gestures to let users pull a light down its long, glass jar.

This evokes the movement that glow worms make when travelling down the snares of the silk threads that they spin to attract their insect prey.

“The bioluminescent lighting of the glowworm has an inherent natural beauty and is very mesmerising to look at,” Ruben said.

“At the same time, these creatures are very delicate and would never survive outside of their own ecosystem,” he added.

“I greatly value the idea to be able to bring this rare, mesmerising effect and beauty into your home environment, by using new technology.”

The Luminosa lamp was made from glass. “Borosilicate glass is extremely useful for high precision glasswork,” Ruben said. “Traditional glass blowing is much harder to guide into a directed shape.”

The lamp’s sensor measures objects in front of it as well as their distance and relays the information to a microprocessor, which sends a series of commands to the LEDs based on the movements.

Luminosa thus lets users decide on both the intensity and positioning of the light from the hanging ceiling lamp.

“Instead of being yet another impersonal, inanimate product from the backdrop of our lives, Luminosa hereby becomes an organism-object one can connect to and actively live with – much like a pet,” Ruben said.

The designer is currently looking for a brand to further develop Luminosa.

Production of Folium is underway together with Dutch biotech company Grown Bio, which also creates biodegradable packaging from mycelium, a material that Ruben says has many benefits.

“It is sustainable in production,” Ruben said. “Production uses only biological matter and waste material can be used as a primary ingredient, for example, hemp, flax or wood fibres.”

“As such, it is a material that is ideally suited for a circular economy. Mycelium is also very lightweight and strong.”

Other recent designs that use mycelium as their main material include Bob Hendrikx living coffin that helps bodies decompose faster and architect Carlo Ratti’s Gaudí-inspired structures.

The post Morgan Ruben's pair of lamps are grown from mycelium or light up like glow-worms appeared first on Dezeen.