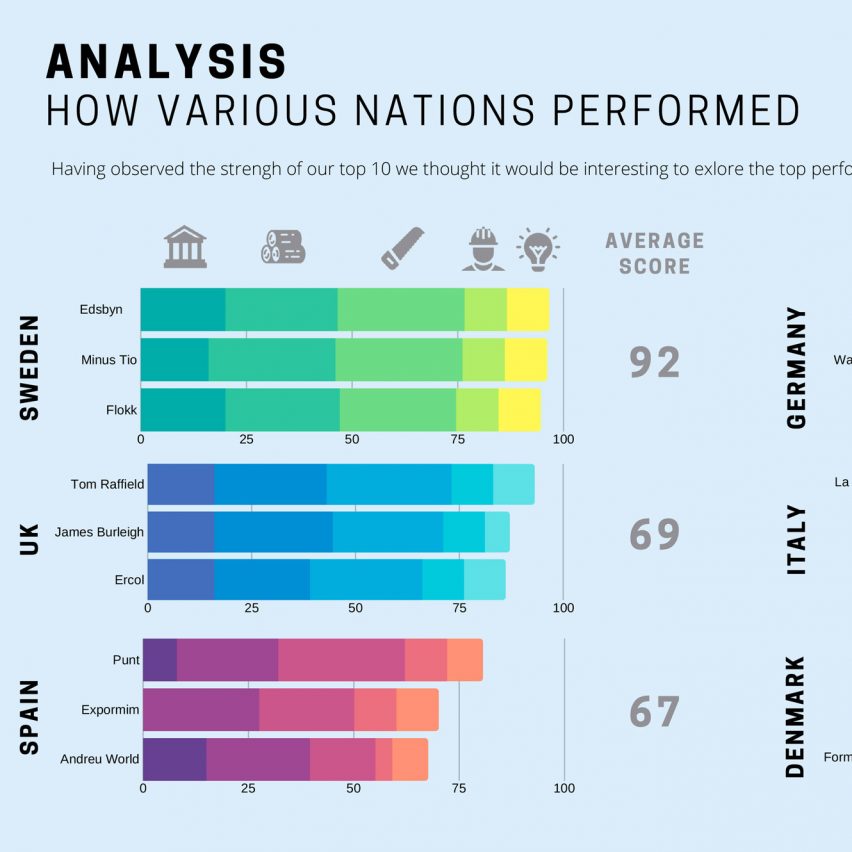 Swedish furniture brands are the most sustainable in the world, according to a survey by design procurement consultancy Dodds & Shute.

Firms from the Scandinavian country scored highest in an environmental audit conducted for the Dodds & Shute Sustainability Report, with German firms coming second.

“As consumers learn more and begin to expect more from the brands they buy from, most companies have realised there are a lot of things they need to improve on before they can be considered sustainable.”

However, the survey accuses the furniture sector in general of “turning a blind eye” to environmental concerns. Many brands fail to provide adequate information to designers seeking to make their projects more sustainable, it said.

“We see the traditional shortcomings of our sector and the role it has played in turning a blind eye to these issues,” says the foreword to the report.

“Research has shown that the furniture, fixtures and equipment [FF&E] fit out has a significant impact on the environmental performance of a building because of its comparatively short lifespan,” it continues.

“It is essential that more care and consideration is taken to what is put inside our homes, hotels, restaurants, offices, schools and developments.”

According to the survey, seven of the ten most sustainable international brands are from Sweden, with Edsbyn in first place and Minus Tio in second ahead of German firm Zeitraum, the highest-placed non-Swedish manufacturer.

Flokk, Johansen and Lintex, which are also from Sweden, are placed fourth, fifth and sixth, with Baux and Lammhults in eighth and ninth places.

“Sweden has dominated our survey because sustainable living is a core part of the Swedish DNA and, as a result, their businesses are founded on strong environmental principles,” Shute told Dezeen.

“It helps that they have good infrastructure that encourages a lot of local production and the support of the Swedish government where all parties believe in the importance of a green energy policy, which is something all Swedish companies benefit from.”

To compile the report, Dodds & Shute audited all the brands it buys from by asking them about their sustainability policies, sourcing of materials, production methods and locations, employment policies and innovation.

Each brand was scored out of 100, with suppliers who failed to respond to the survey automatically scoring zero.

Swedish brands scored 92 on average, compared to 82 for Germany and 69 for the UK. Italy scored 68, Spain achieved 67 and Denmark got 65.

Dodds & Shute, a London-based firm that supplies responsibly sourced furniture to architects and designers, carried out the audit so that its clients could see how well its suppliers perform against a range of environmental benchmarks.

“We want to be held accountable”

“We want to be held accountable for our global impact and only by working closely with our network of manufacturers will we address wider industry issues,” said Shute.

“Our aim is to radically overhaul the way our industry considers what is acceptable in terms of manufacturing and specification.”

Dodds & Shute has pledged to stop working with brands that have poor environmental records.

“Our audit has hugely influenced the products you will find in our shop, which is dedicated to those suppliers who share our commitment to sustainability,” said Shute.

Sweden, along with Italy, scored highly for the way brands rely on local supply chains, meaning components do not have to travel far and standards can be easily monitored.

Other countries, notably Denmark, scored poorly on this criteria due to their reliance on global supply chains with little oversight.

Germany, UK and Sweden were the three countries where brands showed the most willingness to be transparent in their response to the survey while Italy and Spain were the least forthcoming.

Swedish designers are ranked highest for their engagement with brands with good environmental track records.

“No conclusions can be drawn here but designers have an essential role to influence change at manufacturers where ignorance is still prevalent,” the report said.

To request a copy of the Dodds & Shute Sustainability Report, email hello@doddsandshute.com.