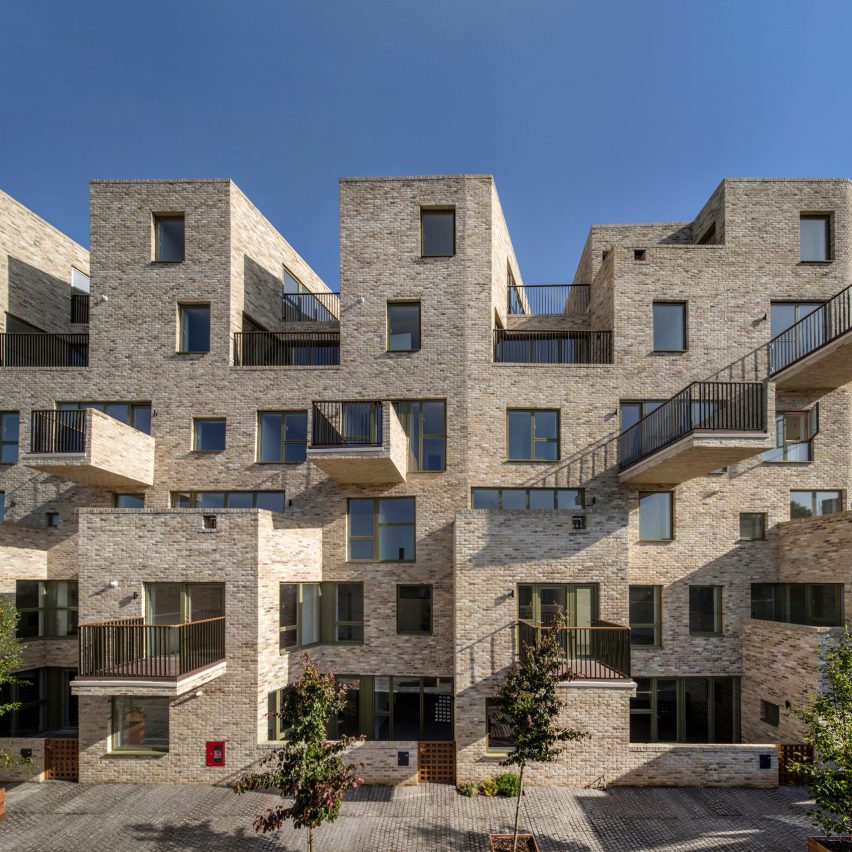 We should be applauding social housing projects, but resist the rhetoric that sees council housing as the only solution to the housing crisis, says Owen Hopkins.

Donald Trump may have been vanquished, but Trumpism is still alive and well, as evidenced by the 71 million votes he received – the highest ever for a US presidential candidate, apart, of course, from his vanquisher, president-elect Joe Biden.

After four years of Trump, we’ve become used to hearing about right-wing populism, which has spawned manifestations across the world, from Bolsonaro in Brazil and Orbán in Hungary to Boris Johnson in England. But populism is not confined to the right, it is also alive and kicking on the left – for whom architecture is central to linking the macro to the micro, just as it is for the right.

A neat illustration of the micro scale can be seen in a new council housing project in Greenwich in south-east London by the British architect Peter Barber, which he recently tweeted out. It’s the type of project that would be familiar to anyone who has followed Barber’s career since he came to prominence with the Donnybrook Quarter in Hackney in 2006.

Since then, Barber has built a reputation as quite possibly Britain’s leading housing architect, renowned for his cleverly planned and generously detailed projects. Aligned with this is Barber’s commitment to the social value of architecture, which has made him an almost sainted figure among the architectural commentariat.

As a result, Barber’s work is something of an ever-present on social media. So far so familiar, you might say. But what made Barber’s tweet about this project catch my eye was that it had been liked a massive 57,000 times – and counting.

For anyone active on “architecture Twitter” this is in stark contrast to the recent proliferation of Trumpian “alt-right” accounts which deploy “traditional architecture” as a way of promoting deeply unpleasant far-right views about some kind of mythical “authentic” western values.

So, it was refreshing and not a little bit uplighting to see something so different generate such a response.

Reading the replies, it was striking that many of the people who responded positively did so not just because it is such a well-considered architectural project, but because it is council housing, standing as the built embodiment of collective values that many on the political left hold dear. Those who were critical of the project were generally so for the same reason.

Perhaps it’s a function of the inherent reductiveness of social media, but I couldn’t help wondering whether what I was seeing here was council housing functioning as cypher for political ideology in a way that’s not so different to how traditional architecture is used by those “alt-right” Twitter accounts. To be absolutely clear, this is not suggesting a false equivalence between whatever political position one might infer in being pro council housing and the abhorrent views of the “alt-right”. Instead, it’s about a commonality or equivalence of tactics.

If this sounds a stretch, consider the familiar left-wing “critique” of the housing crisis: the vilification of private landlords, housing developers and the Right to Buy policy introduced by Margaret Thatcher’s Conservative government 40 years ago – all examples of blame directed at elites. Then, in contrast, is the idea that only the state has the solutions, through tighter regulation and, above all else, a massive council housing programme.

Running through all of this is the attempt to reduce a complex situation to a simple solution – think of Trump’s exhortations that only he could “Make America Great Again”. But at a structural level, this is little different from believing only the state has the answers, a position that, when it comes to architecture, fetishises council housing with the same conviction as the right fetishises traditional styles.

The inescapable question that follows is whether we should still be troubled by these populist tactics when they are used to promote policies we happen to agree with, like building more council housing?

This question becomes more pertinent when we realise the substantial disconnect that exists between this left-wing populist rhetoric and projects by the likes of Barber that it so idolises. What Barber builds is actually very different to the populist mass council housing building programme advocated by the left as the solution to all our housing ills. Barber’s projects are generally small in scale, designed by a private practice rather than the public sector, and, like much of the best council housing being built right now, are generally in London.

The latter is a quirk of the city’s sky-high property prices, which allows the more ambitious (and well located) local authorities to use units built for private sale to subsidise those developed for social rents. While this arrangement is a function of councils still being limited by central government, it simply could not happen in a housing market that wasn’t so overheated.

Given this, one might wonder whether Barber would actually be able to deliver housing of such high quality if the political situation was more aligned to the one advocated by left-wing populists. It is certainly the case that the highly specific nature of his projects and the way they are tied into their sites – on which their success to a significant degree rests – would be more difficult to achieve on larger, more comprehensive, “mass” scales.

After all, this is one of the key architectural lessons of the post-war era, which judging by much of the council housing going up in London right now is one that almost all of its architects, Barber included, are fully signed up to. This simple fact makes clear just how misguided the populist rhetoric that harks back to those glory days actually is in its naive assumption that our relationships to state, environment and to each other are little changed since the 1950s and 1960s.

All this goes to show how little concerned populists, whether of the right or the left, are with actual architecture. For the right, the only thing that matters is style; for the left, it’s council housing and state intervention. Anything else is a betrayal. And it’s this insistence on a zero-sum game that is populism’s fatal flaw.

The opposite of populism is pluralism, diversity and multiplicity. History tells us that it’s the kind of culture that produces the best architecture, not one of conformity. So while we should certainly be applauding council housing projects today – and Barber’s especially – we must resist populist rhetoric that sees council housing – as proxy for the state – as the only solution to the housing crisis, just as we do the right’s weaponisation of traditional styles. A political position that claims it has all the answers leaves no room for innovation or doing things differently.

It’s always tempting to look for the easy solution, but we should be immediately suspicious of claims there is only one answer to a problem, as much as we of anyone who says there’s only one way to build. While Trump’s fall could lead us to think that populism is on the wane, on the ground the fight against populisms of the right and of the left is only just beginning.

Owen Hopkins is an architectural writer, historian and curator. He is director of a new centre for architecture and cities in Newcastle, UK opening in 2022 and was previously senior curator at Sir John Soane’s Museum and architecture programme curator at the Royal Academy of Arts. He is the author of books including Postmodern Architecture: Less is a Bore (2020), Lost Futures (2017) and Mavericks: Breaking the Mould of British Architecture (2016).
Main image is by Morley von Sternberg.

The post The left "fetishises council housing with the same conviction as the right fetishises traditional styles” appeared first on Dezeen.