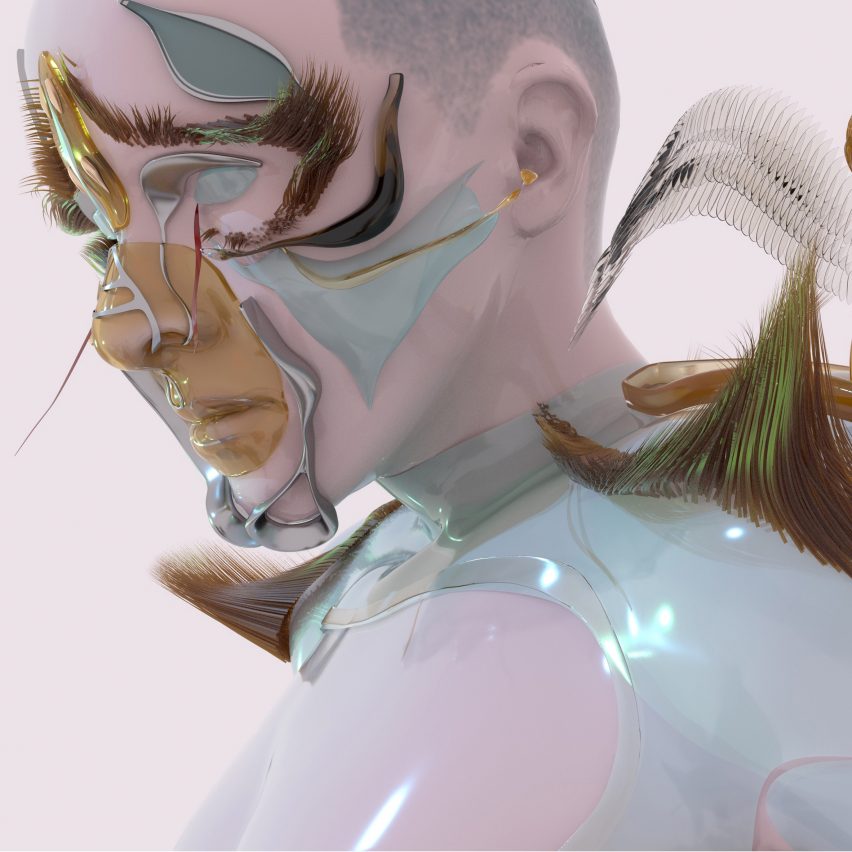 Royal College of Art graduate Marcel/a Baltarete has created a series of short animations depicting themselves as otherworldly beings to alleviate and interrogate their feelings of gender dysphoria.

Gender dysphoria describes the distress that can be experienced by people, whose biological sex and gender identity do not match – a feeling Baltarete describes as “grief, discomfort and inadequacy all at the same time”.

Baltarete, who is nonbinary and uses they/their pronouns, studied fashion at the RCA but changed mediums partway through their graduate degree.

Instead, they taught themself how to work with 3D modelling, augmented and virtual reality.

“I started feeling uncomfortable and dishonest with fitting garments on other people’s bodies when I realised I didn’t have a good understanding of my own body, as the questions around my own gender identity started to surface,” they told Dezeen.

“I knew I had to explore these questions on my own body, but doing so in real life would have felt too exposing, so the digital world allowed me to maintain a safe distance.”

Baltarete 3D scanned their head to create a virtual avatar of themselves, which is digitally enhanced and animated to transform into virtual beings with fur, translucent horns or impossibly glossy skin.

In two short films, titled A Journey of Digital Introspection and Relief part one and two, the designer plays with abstracted body parts that suggest different sexual organs, as a way of exploring their feelings about different gender expressions without having to engage with the realities of their own body.

A Journey of Digital Introspection and Relief I

Baltarete described the process as therapeutic, saying that it was able to relieve their feelings of gender dysphoria in favour of an unprecedented “gender euphoria”.

“Digital re-embodiment allowed me to reimagine an alternative way of living, a post-human, trans-human future where I wouldn’t be limited by any physical or mental constraints,” they said.

“It also allowed me to question my desire for a fit, masculine-appearing body and if this is something I genuinely identify with or a product of my internalised misogyny.”

Baltarete is currently an artist in residence at The Immersive Kind, an interdisciplinary collective working to ensure that digital technologies contribute to an accessible, inclusive and sustainable future rather than simply being used as a means of surveillance and subjugation.

A crucial step in this, according to the initiative’s CEO and co-founder Kadine James, is broadening access to new technologies among people of colour and the LGBT+ community, which is underrepresented in the tech world.

“Queer designers have the power to present alternative approaches to digital representation,” she told Dezeen.

“What we explored with Marcel/a was how we can work towards redesigning and inspiring 21st-century, inclusive approaches to the digitalisation of society.

“To Marcel/a, the digital human can become an extension of a real human. There is a sense of freedom and liberation present in their work that can only be represented through the medium of extended reality,” James continued.

Virtual and augmented reality are already being used as forms of therapy, with companies including Oxford VR and Stanford University’s VR-IT clinic using it to treat phobias, social anxiety and PTSD.

Baltarete explained that their project could also help other people alleviate the depression and anxiety that can be associated with gender dysphoria.

“If this entire experience could take place in VR in a very realistic manner where you can physically experience a different body, I imagine the effects would be much greater,” Baltarete said.

Interdisciplinary art collective BeAnotherLab has previously created a virtual reality headset that allows users to swap genders, in order to help them experience life from a different perspective.