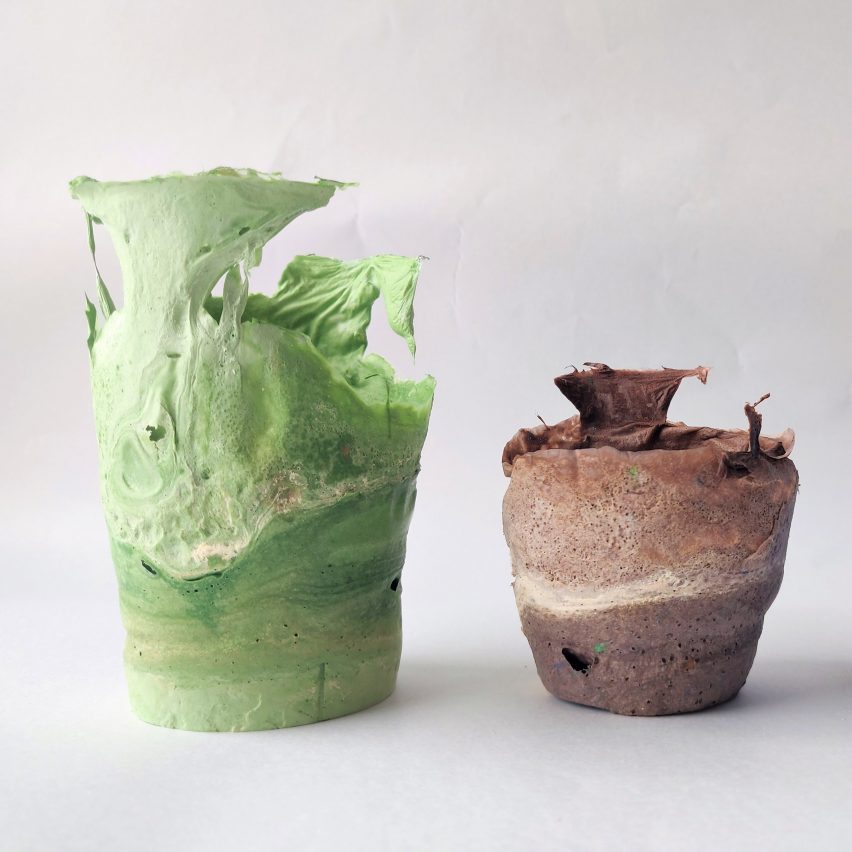 Indian designer Sachi Tungare collected five kilograms worth of cigarette butts by hand, in order to create her Jugaad collection of drippy, multi-coloured bowls and vases.

Presented as part of the Rethinking Plastic programme at Dutch Design Week, the series consists of 10 objects, each made from around 300 cigarette filters.

The aim is to draw attention to the little-known fact that cigarette stubs are the most common source of plastic pollution in the world, with 4.5 trillion of them littered every year.

“They’re as bad of a problem as plastic straws, if not worse,” Tungare told Dezeen.

“They essentially consist of plastic, cellulose acetate fibres and a paper wrapper, along with multitudes of harmful toxins and chemicals that get leached into the environment,” she continued.

“These cellulose acetate filters take a long time to degrade and even then, they degrade into microplastic particles that remain in the environment for years and years to come.”

In a bid to give this abundant material a second life, the designer set out to collect the discarded stubs herself while an exchange student at the Design Academy Eindhoven. She said she picked up multiple kilograms of filters from where they had been left on the street.

“This was also a way to gauge the knowledge about this particular kind of waste in the minds of the general public,” she added.

“I had people come up to me to ask why I was doing this, which led to conversations with people of all ages and the conclusion that awareness about this issue is seriously inadequate.”

Back in India, where she studied industrial design at Bangalore’s Srishti Institute of Art, Design & Technology, she enlisted fellow students to donate their cigarette butts, accumulating jars upon jars over the course of a few months.

These were then amalgamated together and used as a raw material to create the pieces in the Jugaad collection.

“The material is thoroughly cleaned using ecological cleaning agents before it is dissolved, mixed with colour and water and then quickly cast into moulds,” said Tungare.

“The nature of cellulose acetate is such that, when its solution comes into contact with water, it forms a precipitate.”

This means that a part of it solidifies in the mould and separates from the remaining liquid, which is then poured away in a process that gives rise to the fluid, organic formations that feature throughout the collection.

The collection’s name, jugaad, is a notoriously untranslatable Hindi term that describes solving a problem in an improvised yet ingenious way with the limited resources at hand.

In this spirit, Tungare hopes to scale-up the project by working with a recycling centre that collects cigarette butts from local restaurants, pubs and venues.

“They can be moulded into various forms, hence there are quite a few possibilities in terms of usage,” she said. “They can be used as vases, pen stands or even formed into lampshades.”

The project was recently on display as part of Rethinking Plastic, which was launched as part of Dutch Design Week and over the next two years will span a programme of talks, workshops and exhibitions aimed at rethinking the material’s production cycle.

As part of the project, Dezeen livestreamed an interview with Håkan Nordin, the head of sustainability at Swedish flooring brand Bolon, about how plastic can form “part of the solution” to climate change.

As the media partner for Dutch Design Week 2020, Dezeen also curated a virtual tour of the event as well as hosting five live talks with emerging designers.