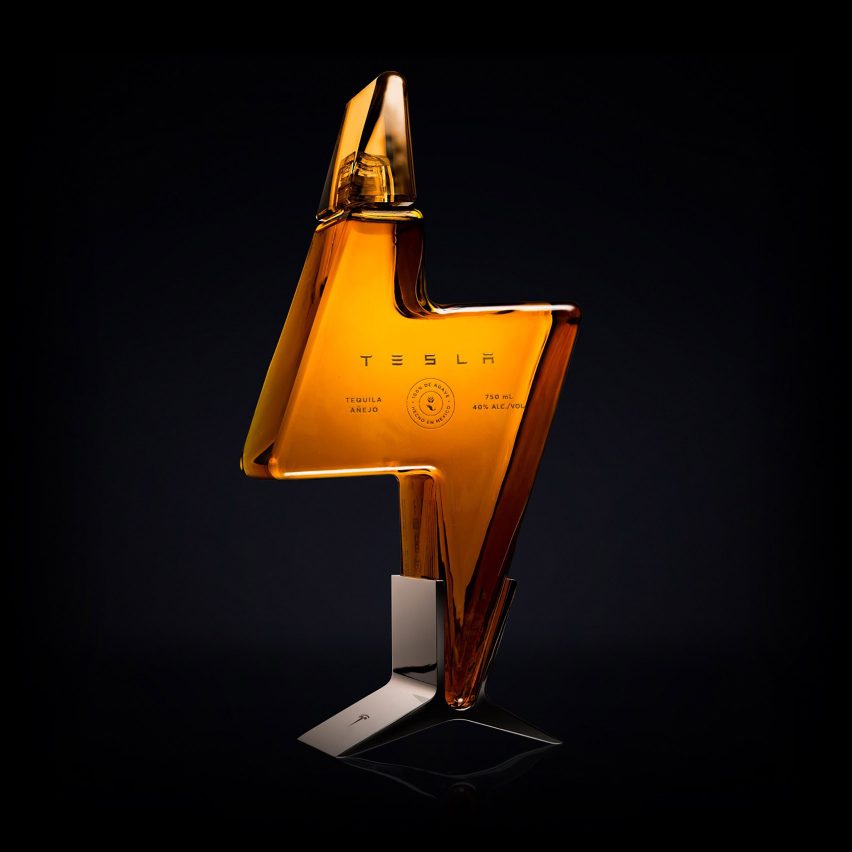 Electric-car brand Tesla has launched its own branded tequila, which comes inside a lightning-bolt-shaped bottle, after founder Elon Musk suggested the idea as a joke on 1 April 2018.

On April Fools’ Day in 2018, the American entrepreneur joked that Tesla had gone “completely and totally bankrupt”, leading to him being “found passed out against a Tesla Model 3, surrounded by ‘Teslaquilla’ bottles, the tracks of dried tears still visible on his cheeks.”

Six months later, Musk filed an application with the US Patent and Trademark Office to trademark “Teslaquila” and teased a visual of the bottle on Twitter, which had a much more generic form than the final product.

Over two years after filing for the trademark, the drink has now launched under the new, and simpler, name of Tesla Tequila, which is now available to purchase on the brand’s website for the costly sum of $250.

Contained inside a hand-blown glass bottle shaped like a lightning bolt, which could be a reference to the company’s electric cars, the product is only available in select states in the US.

The Tesla Tequila appears to come with a metal stand, which holds the pointed tip of the bottle in place to enable it to stand upright.

According to the online description, the tequila has been aged for 15 months in French oak barrels and features a “dry fruit and light vanilla nose with a balanced cinnamon pepper finish”.

The Tesla Tequila is produced by agave spirits brand Nosotros Tequila, while Speakeasy Co is responsible for the distribution of the product.

SpaceX founder Musk is not short of eccentric ideas. Back in November 2019 he unveiled the Cybertruck – a bulletproof electric vehicle designed to look like a cross between a pickup truck and a stealth fighter jet.

Also in 2019 he launched tech startup Neuralink, whose aim was to develop implants that connect human brains with computer interfaces via artificial intelligence.

Musk revealed the design of the implant and the robot that will be used to insert it earlier this year, in September. He also demonstrated the effects on a group of pig test subjects that had had the in-brain device installed.

Photography is from Tesla.