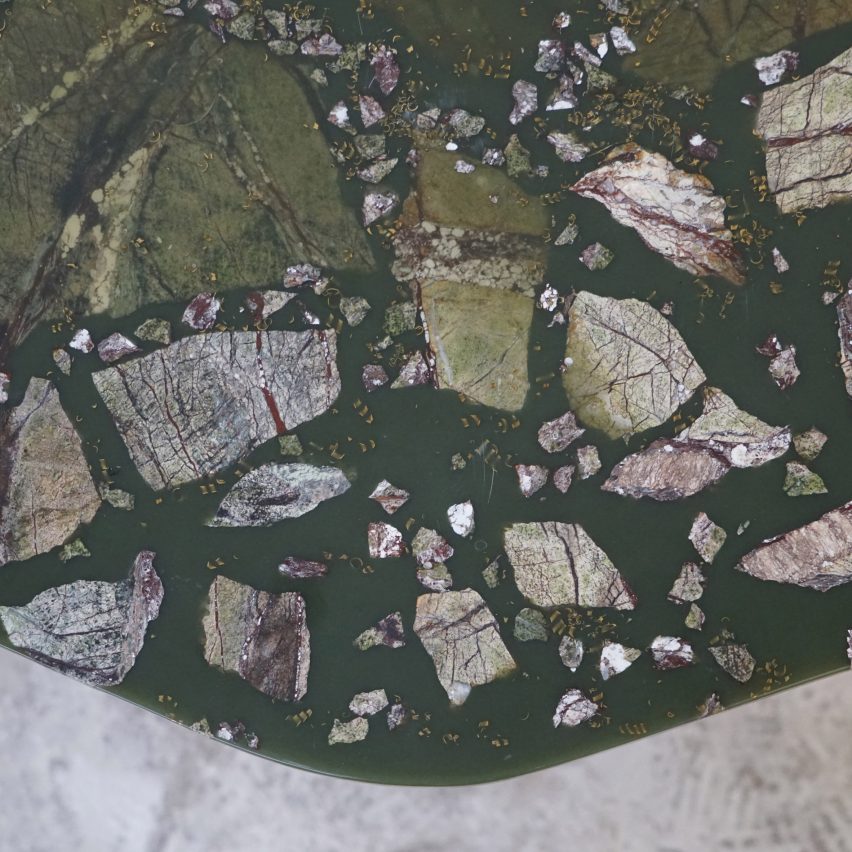 Beirut studio T Sakhi has designed a collection of green-hued coffee tables using resin, brass powder and marble offcuts to create the effect of “looking through a microscope”.

Studio founders and sisters Tessa and Tara Sakhi created the series of furniture to give waste and fragmented materials a new life by combining them with a unifying component.

The two-piece collection of tables, called Reconciled Fragments, is made of discarded pieces of forest-green marble found in a quarry and brass powder taken from local factories in Beirut, Lebanon, which were placed in a mould and set in place with liquid resin.

According to the sisters, this combination of materials emulates decomposing matter, with the resin being chosen to convey a sense of depth and transparency.

The duo described the resulting effect as being “like looking through a microscope.”

“When we look at something up close, whatever it is, be it in nature, a component or even the cells of our body, everything is composed of little particles that create a new whole,” Tessa told Dezeen.

“We want to simply reinterpret ‘shattered’ pieces into a ‘new’ entity,” she continued. “We are keen to provoke a sense of curiosity throughout our work on materials and stimulate the sense of touch in visitors.”

Once the resin has solidified, it is cut down to a two-centimetre thickness to allow a certain amount of light to shine through, highlighting the layers of material and aggregates.

This surface functions as the tabletop, which is rested on a base made of oxidised bronze or resin.

The Reconciled Fragments collection was produced in Beirut by The Piece Makers and Marm Group.

For the two sisters, it was important to work with local Lebanese craftsmen when creating the furniture.

“Lebanese craftsmen have an incredible know-how and we as designers learn immensely while working with them,” Tara told Dezeen.

“Following the economical collapse and the political turmoil that occurred in October 2019, as well as the devastating blast in August, craftsmen are barely surviving in the country.”

“For the reconstruction of Beirut, it is crucial we support them in order to preserve our heritage and our identity,” she continued.

“Keeping their small business alive is essential not only for the local economy of the country but also for all the creatives and designers in Lebanon that execute their work thanks to their expertise. We are all part of one economical wheel and we must keep it active to continue creating and expressing ourselves.”

Dezeen spoke to Tessa back in August about the effects of the Beirut explosion, which left much of the city in ruins.

“No one can possibly imagine the scale of the disaster, it is beyond an apocalypse, the entire city is in rubbles,” said Tessa, who was in her house four kilometres away from the explosion when it happened.

“I thought it was a strong earthquake and since I live in a typical old Lebanese house, I was afraid it might collapse,” she told Dezeen.

“I grabbed both my dogs and the next thing I remember was a massive sound of an explosion,” she added. “My windows exploded, glass shattered everywhere, ceilings and walls were falling, objects exploded, and there was immense smoke.”

Since then, various architects and designers have put their hand to supporting Beirut by creating community centres for repairing furniture damaged in the blast and putting artworks and signed drawings up for auction to raise money for rebuilding the city.