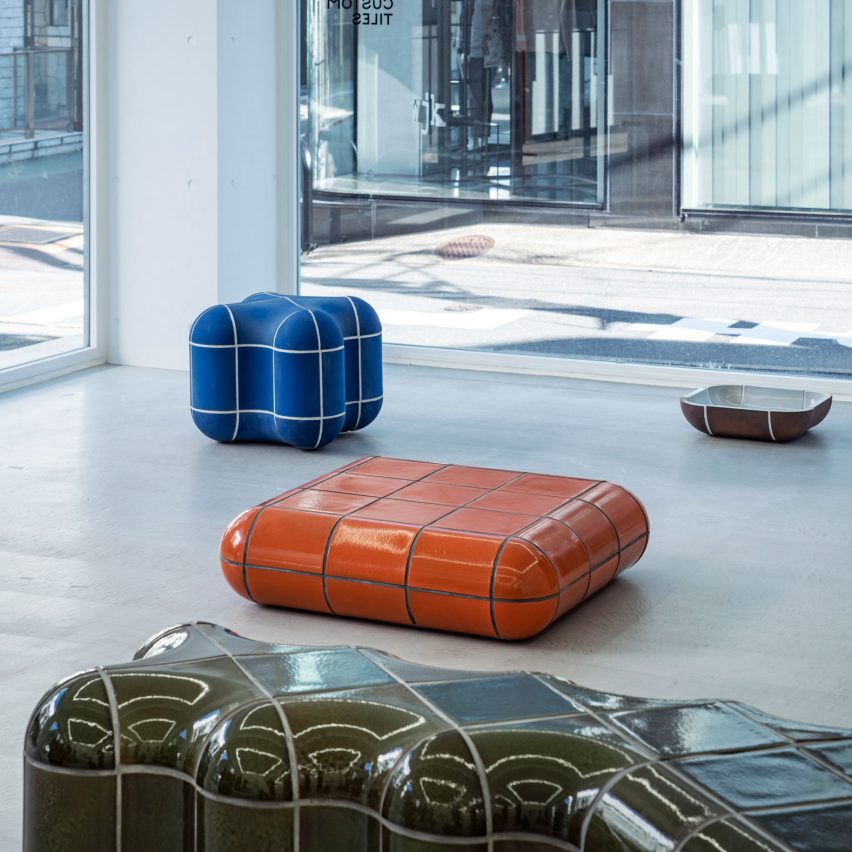 London designer Max Lamb has created an installation of sculptural items made from 3D-shaped tiles he developed for Japanese brand Tajimi Custom Tiles.

Tajimi Custom Tiles worked with Lamb to create the tiles, which can be custom made for architects, and an installation of pieces made from them that was displayed in Tokyo.

Lamb decided to produce his tiles using pressure moulding, which creates highly precise shapes, so he could play with the idea of making the seemingly two-dimensional tiles more three-dimensional.

“Tiles are always used in the third dimension – even though they’re seemingly superficial, like a flat surface on a floor,” Lamb told Dezeen.

“But the object that they’re being used on is three-dimensional. And so I thought: what if my tile is two-dimensional, but can wrap up onto the wall?” he added.

“Suddenly there’s a change of direction. I was focusing on those changes – how do I transition between a plane on the x-axis first, onto a plane on the y-axis?”

To create his tiles, Lamb used closed moulds – a production process similar to plastic moulding where moulds are injected with a semi-liquid clay paste.

He came up with four different tile designs – a flat tile, a corner tile, a curved bead tile and a sweep tile that can be used where a floor connects to a wall.

“The flat tile is only glazed on one side, but the three shaped tiles can be glazed on either side and mounted in both directions,” the designer explained.

The tiles were originally produced for an exhibition to launch Tajimi Custom Tiles, which was held in Tokyo from October 31 to November 3.

Lamb created a number of sculptural tile designs for the event, including pieces that look like seats, a bowl and a large cushion with rounded corners.

While these initial designs were a way to play with the preconceived notions of how tiles are used and create playful shapes, the tiles also have a practical application. So far, Lamb has used them in his own bathroom as well as for the bathroom of art gallery Salon 94 in New York.

“I’m having a lot of fun designing bathrooms using those tiles as a building block, wrapping the floor, the walls, the basin, the shelf, and little niches within the room that offer platforms for soap dispensers and paper towels [in tiles],” Lamb said.

Tajimi Custom Tiles will make bespoke tiles for architects and designers and is based in Tajimi in the centre of Japan’s tile industry. Lamb’s designs were informed by a visit to its factory, where he saw the production process in action.

“What I find so beautiful about working in Japan is that it doesn’t matter where you go – every single place, every single town, city or prefecture has its own very distinct craft or industry,” Lamb said.

“You literally could spend a lifetime exploring Japan through crafted design and making.”

The exhibition in Toyko also featured tiles created by Korean designer Kwangho Lee. Lee was inspired by the clay extrusion process and created modules that can be aligned to create patterns that seem knitted together.

Tajimi Custom Tiles Tokyo 2020 Installations by Max Lamb and Kwangho Lee in 3D ran from 31 October to 3 November. See Dezeen Events Guide for an up-to-date list of architecture and design events taking place around the world.