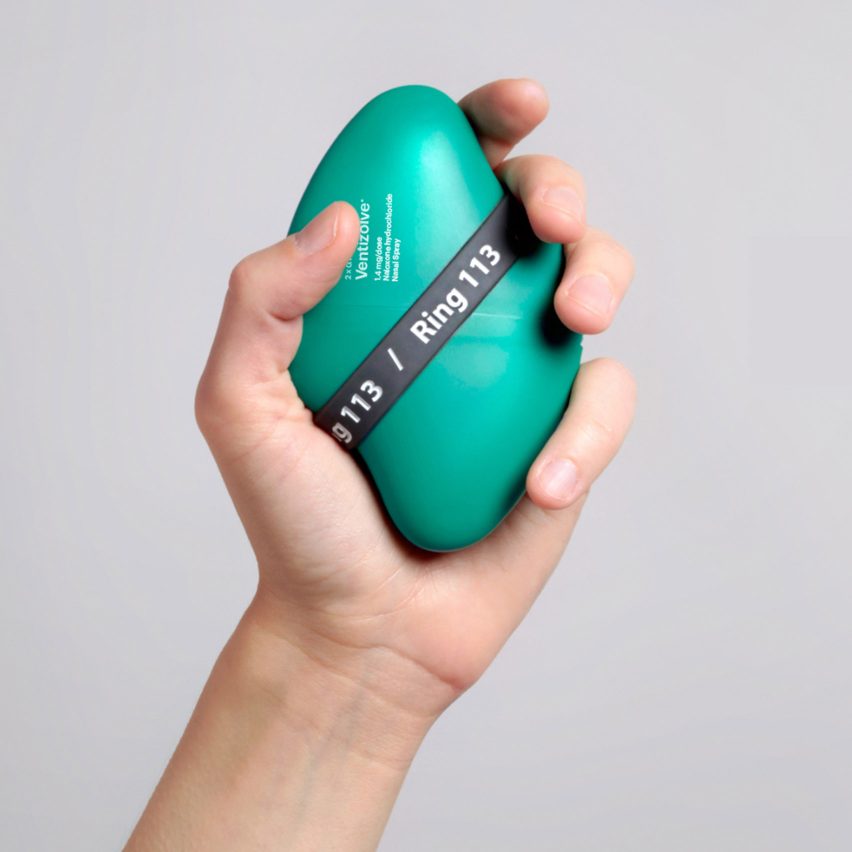 Norwegian multidisciplinary studio ANTI has designed Ventizolve – a portable naloxone product for emergency use that can temporarily reverse the effects of a lethal opioid overdose to provide time for medical attention.

Contained inside the amorphous, teal case are two doses of naloxone, which is an emergency medication that can temporarily reverse the effects of an overdose of opioids, such as heroin, methadone, opium, codeine or morphine, in under three minutes.

While the drug can save someone’s life in the event of a lethal overdose, it only reverses the effects for around 20 to 40 minutes. After this the medication will wear off and the person will go back into overdose if medical attention is not given.

Manufactured by Norwegian addiction medicine company Dne Pharma, ANTI‘s Ventizolve product comes as a nasal spray for safety and ease of use for non-medic users.

The kit was designed for both medic and non-medic carrying and usage, and each spray contains 1.26 micrograms of naloxone.

ANTI wanted to create a product that could be easily carried around “with comfort and without stigma” in case of emergency, and that didn’t look like a typical pharmaceutical product.

“Often landing on unsympathetic solutions, indifferent to the end-user, not considering the personal, social and environmental context, products that can carry social stigma and fail to support the ‘in the moment’ no-medic use in an emergency.”

The bright teal colour stands out in different environments, making the product identifiable and easy to find in the case of an emergency.

ANTI focused on making the kit compact and easy to open as well as being straightforward to operate, which is essential in a life-or-death situation.

The curved casing is small enough to be held comfortably in the hand. An elastic band fits around the case to ensure it can’t be accidentally popped open.

When needed, this band is removed and the case is pulled apart, splitting in half to reveal one nasal spray in each side.

As the design team explained, the quick release function of the elastic band functions in a similar way to a pin on a fire extinguisher or the “break glass” barrier in front of an alarm.

“Design is a word that too often belongs to the wealthiest and healthiest in society,” added creative strategist at ANTI Tom Morgan. “An ironic reality in what design is truly for; the betterment of the human experience.”

“Our ambition from the very start was not to compromise the design values of Ventizolve; good design is a universal right,” he continued.

“There is no greater communication responsibility, and therefore challenge, then at the point of resuscitating a life. But, this project focuses on far more than just that moment. The unfortunate reality being there are many barriers to saving a life starting far away from the overdose itself.”

An estimated 585,000 people died as a result of drug use in 2017, with opioids accounting for the majority of drug-related deaths, according to the studio.

It added that the use of opioids is a prevalent issue in the US, for instance, where 21 to 29 per cent of patients who are prescribed opioids for chronic pain end up misusing the drug, with approximately five per cent eventually transitioning to heroin.

According to Morgan, the Ventizolve formula contains a lower volume of naloxone than others to prevent future overdoses.

“The risk of a high dosage of naloxone in the event of an overdose can result in immediate abstinence with painful results for an opioid addict,” he explained.

“The resulting risk of a subsequent overdose is therefore higher, and can in fact be a barrier for opioid addicts to carry naloxone,” he added.

The Ventizolve kit has been launched in the Nordic Region and across Europe. Other designers aiming to prevent opioid deaths include a group of researchers at Purdue University, who developed a wearable device that can detect an opioid overdose and trigger the release of an antidote.

The device comprises a sticker-like sensor on the chest to measure the user’s heart rate, and a magnetic-field generator strapped to the arm, as well as a capsule of an antidote drug.

The device is designed to stabilise the user in 10 seconds, giving those who overdose alone or are left incapacitated enough time to receive medical attention.