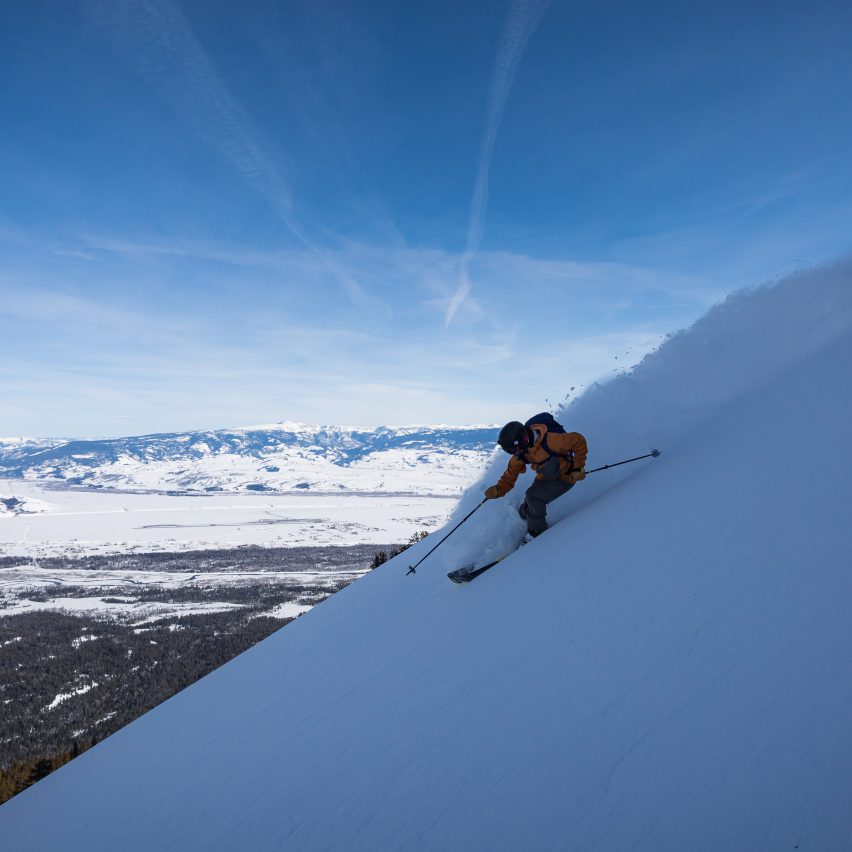 While regular skis are generally made from wood clad in fibreglass and thermoplastic ABS, which is bound to the wood using resin or glue, WNDR Alpine‘s version is reinforced and coated with algal polyurethanes.

“Most of the oil that humans have extracted as petroleum was once some variety of prehistoric algae, so you can think of our process as going directly back to the source,” WNDR Alpine’s manager of brand development Xan Marshland told Dezeen.

“We don’t have to rely on any extractive industry such as fracking or drilling or a global petroleum supply chain to produce our oil. And, unlike petroleum, microalgae oil is a renewable resource.”

“Even compared to other plant-based oils on the market such as soy, palm or corn, the water use, land use and carbon footprint of microalgae oil is significantly lower,” he continued.

First, microalgae are genetically engineered to produce all types of different oils when grown and fermented in steel tanks, “much like a brewery produces beer”.

These oils are then used as building blocks to create new, biobased materials. Rather than having to rely on a limited library of existing materials, this allows WNDR Alpine to create materials from scratch that are specifically designed with skiing in mind.

And as a result, the company says it is able to create not just a comparable but a superior performance than can be achieved using petroleum-based plastics.

“The ski industry has historically been underserved by large-scale materials suppliers,” said Marshland.

“There weren’t any materials utilised by ski builders that were truly purpose-built for skiing. Using microalgae to create biobased materials enables an unprecedented degree of flexibility in the design and development of our skis.”

WNDR Alpine caters specifically to off-piste or backcountry skiers. This means their skis need to be able to withstand harsh impacts and varying conditions without weighing down the user on their manual ascent up the mountain.

The final skis feature a body made from domestically sourced Aspen wood, which is reinforced through a core made of an algae-derived hard foam, similar to high-density polyurethane.

“The algal hard foam in our algal core is created via a chemical reaction of the oil with a chemical hardener and water, which helps the material expand into a rigid, cellular material,” Marshland explained.

Instead of relying on adhesives to fix the walls to the body of the ski, WNDR Alpine used an algae-based, liquid cast polyurethane that acts as the wall and the glue simultaneously.

“The cast polyurethane that makes up our algal wall is poured as a liquid into a channel along the side of the ski’s core,” he said.

“As the liquid cures, it natively bonds to micropores in the core without the need for resins to hold the components together, resulting in a more predictable, stable and durable construction.”

This process also has the added benefit of cutting out the waste that is normally generated by trimming plastic sheets to size around the ski’s core.

“Waste is a big issue in the ski industry. The production process always involves some amount of cutting, trimming and grinding, all of which create waste,” said Marshland.

“We’re far from perfect, but we’ve been able to eliminate about two pounds (0.9 kilograms) of landfill input per ski manufactured. We do this through our liquid casting process and by diverting flashings from our waste stream, which we’re currently working on repurposing into accessory products and ski components.”

This is especially important because although the plastic is bio-based, it would not easily biodegrade.

Beyond developing skis as part of WNDR Alpine, Checkerspot also creates fabrics and textile finishes for the fashion industry under an offshoot called Beyond Surface Technologies.

Other designers have pushed the sustainable credentials of algae even further, with New York designer Charlotte McCurdy developing a carbon-negative raincoat made from an algae bioplastic and CSM graduate Scarlett Yang fashioning a dress using algae extract that can decompose in water within 24 hours.

All skiing photography is by Carson Meyer and images of the production are by Pep Fujas.