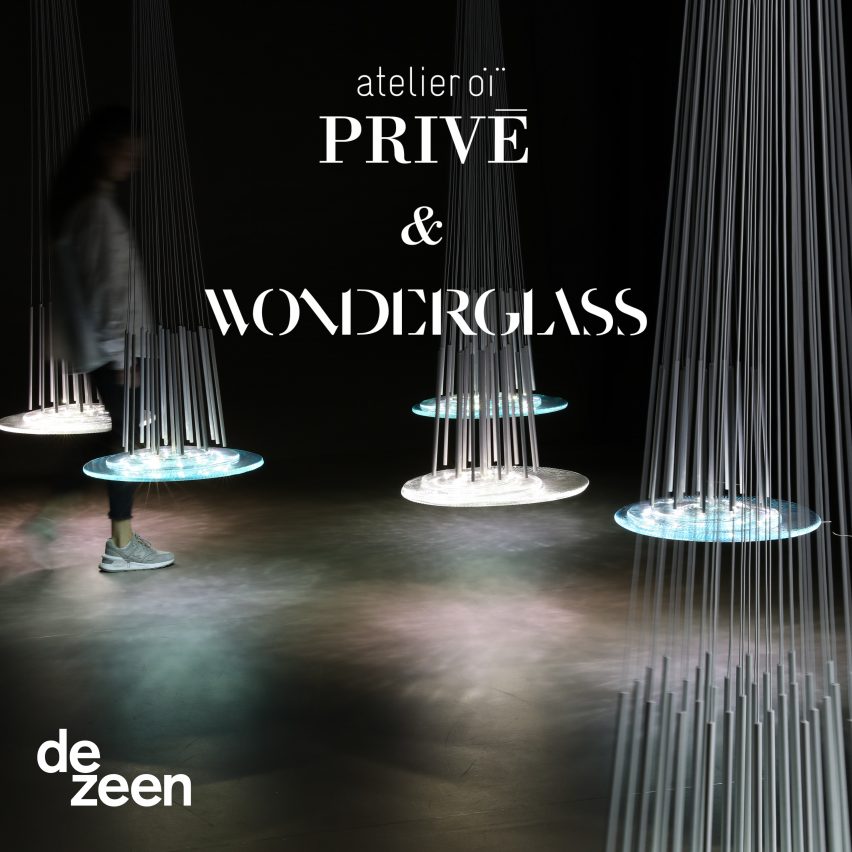 In this live Dezeen talk in collaboration with Atelier Oï, the Swiss architecture and design studio revealed its forthcoming collection of glass artworks and gave a guided tour of its workplace, which features an exhibition of the new work.

The trio discussed the preview of Atelier Oï Privé, a new project in which the studio spotlights a chosen material by producing a limited edition collection exploring its properties and craft.

The first material the studio is exploring through the Atelier Oï Privé series is glass. The resulting five-piece capsule collection, called Collection Gaïa, comprises a series of cylindrical, globular and pendulum-like sculptures made of blue and clear glass.

Atelier Oï designed the collection to reflect glass’ ability to change states from liquid to solid. Each of the pieces interacts with a light source that helps to cast dynamic patterns across the surrounding surfaces.

“We wanted to explore the many different states that glass can reflect,” Atelier Oï told Dezeen.

“We were inspired by nature and our contemplation on its phenomena and celestial forces. Collection Gaïa reflects back to us the visceral beauty and ever-changing nature of the natural world.”

Each of the pieces has been installed as part of an exhibition at the Moïtel – Atelier Oï’s headquarters in La Neuveville, Switzerland.

Four of the five artworks have been installed on the floor, while one is suspended from the ceiling and hovers just above the ground.

The collection takes its name from Greek mythology – the term Gaïa refers to the personification of the Earth.

Each of the five sculptures within the collection has been given a unique name: Marea, Éos, Parhelia, Séléné and Aura.

“Marea, named for its reference to the rise and fall of the tide, is designed to mirror the impression of light moving on water,” explained the Swiss studio.

The Marea piece features stacked suspended discs of clear glass with radial grooves on the base. A light is projected through the glass from above in order to create a ripple-like pattern on the floor below it.

“The pieces are shaped by gravity to create the illusion of a liquid on the brink of overflowing.”

When combined with a light source, Éos produces a pattern of oscillating shadows.

Parhelia, Séléné and Aura are the result of Atelier Oï’s early experiments with glass in its molten state.

“These pieces share a process whereby the liquid glass, while molten, is allowed to collapse in on itself,” explained the designers.

The resulting glass has been strategically cut and arranged to exaggerate the interplay of light and glass.

The studio collaborates with other international design studios and brands including Louis Vuitton and Foscarini.

Collection Gaïa was produced in partnership with WonderGlass, a family-owned glassblowing company that aims to consolidate traditional Venetian craftsmanship with contemporary design.

Atelier Oï Privé and Collection Gaïa will officially launch in February 2021 in conjunction with the studio’s 30th anniversary.

This talk was produced by Dezeen for Atelier Oï. Photography is by Atelier Oï.