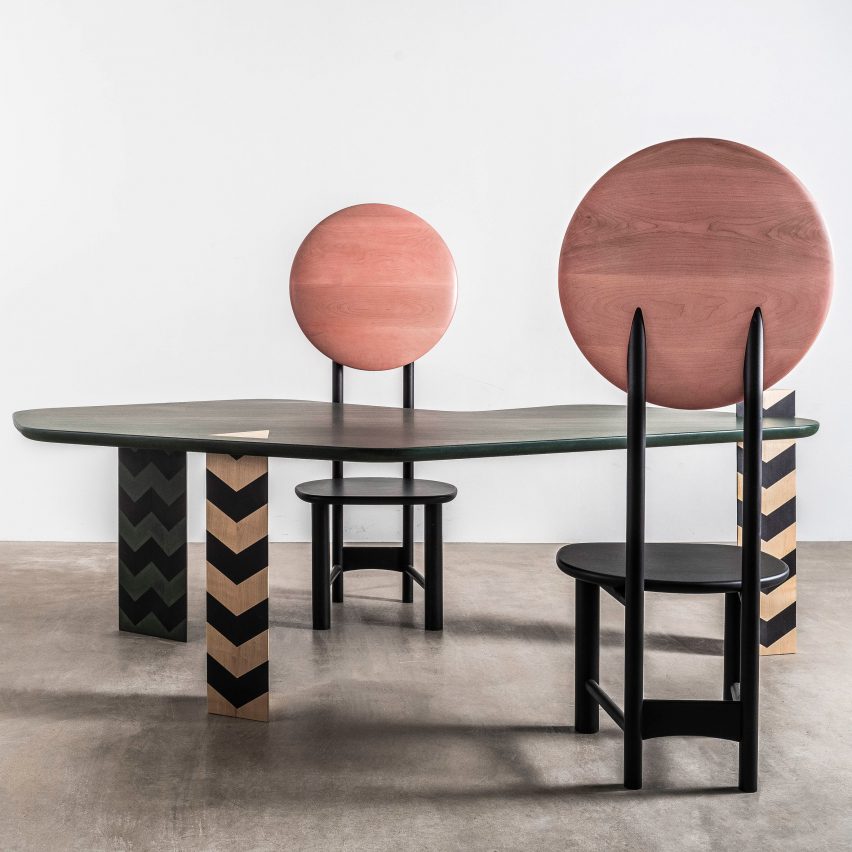 Dezeen promotion: a range of carbon-negative furniture items created by designers including Ini Archibong and Thomas Heatherwick for London’s Design Museum can now be viewed as part of a permanent virtual exhibition.

Jointly commissioned by the American Hardwood Export Council (AHEC), Benchmark Furniture and the Design Museum, the Connected exhibition tasked nine designers with creating a table and seating object for their own home offices.

Designed for their personal use, each designer’s creation was made to suit their new ways of living and working from home as a result of the coronavirus pandemic.

The exhibition aimed to explore how designers and craftspeople have adapted their working methods during lockdown.

Designers were also invited to record video diaries documenting the process of creating their pieces, which have been compiled and made into a documentary featured at the top of this page.

Participants included Archibong, who is based in Switzerland, London-based Heatherwick Studio, Jaime Hayon from Spain and Netherlands-based Sabine Marcelis.

While Archibong took cues from the undulating rock formations of Giant’s Causeway in Northern Ireland for his Kadamba Gate table and seating design, Heatherwick Studio created a modular desk with wooden planters for legs.

The nine furniture pieces were displayed at London’s Design Museum from 11 September to 11 October. The show, which was digitally scanned by V21 Artspace, is now permanently available to view online as a virtual exhibition.

Each design was made from a choice of three sustainable American hardwoods: red oak, maple or cherry. According to AHEC, the resulting collection of objects removed more carbon from the atmosphere than they generated.

“When considered as a group, the Connected designs are better than carbon neutral,” said AHEC. “The total global warming potential (GWP) – often referred to as the ‘carbon footprint’ – of the nine Connected designs is minus 342 kilograms of CO2 equivalent.”

“It takes a little over 10 seconds for the hardwood logs harvested to manufacture all the Connected designs to be replaced by new growth in the US forest,” it continued.

“The full environmental Life Cycle Assessments on each of the nine projects prove that these pieces are environmentally sound, going beyond carbon neutrality and leaving a negative carbon footprint.”

Details on the exhibition can be found via the Design Museum website, while more information on the work AHEC does can be found on its webpage.

Competition: win a copy of In Memory Of: Designing Contemporary Memorials