About Time: Fashion and Duration exhibition at The Met celebrates 150 years of fashion 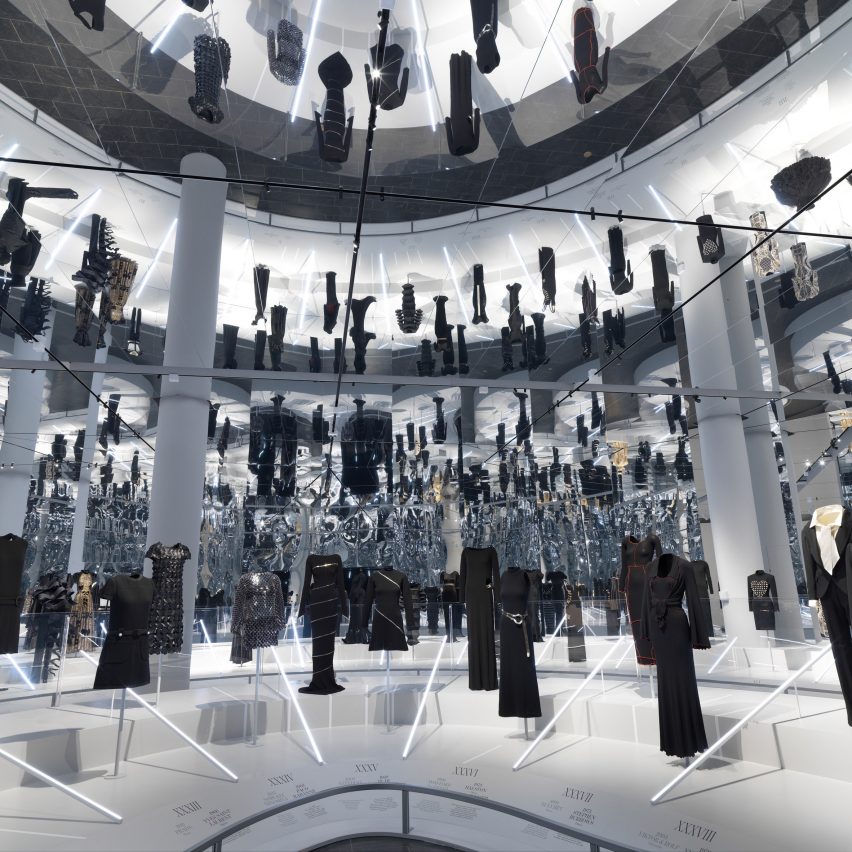 The Met’s Costume Institute opens About Time: Fashion and Duration at the museum’s Fifth Avenue location on 29 October –  the original planned opening in May 2020 was postponed due to the coronavirus pandemic.

Featured fashion dates back 150 years to 1870 to coincide with The Met’s 150th anniversary. Rather than presenting designs chronologically, the exhibition mixes up the timeline in order to compare the cyclical nature of fashion across the years.

“About Time: Fashion and Duration considers the ephemeral nature of fashion, employing flashbacks and fast-forwards to reveal how it can be both linear and cyclical,” said The Met director Max Hollein.

“The result is a show that presents a nuanced continuum of fashion over the museum’s 150-year history.”

Devlin, who has created stage sets for musicians The Weekend and Katy Perry, worked with The Met’s Design Department to create a time-travelling-themed exhibition.

It is located in two galleries in the museum’s Iris and B Gerald Cantor Exhibition Hall that are in a circular formation like a clock. Called Clock One and Clock Two, they have different material finishes. The former is nearly all black, and the latter is covered in mirrors.

White markings on the floor or thin white lights punctuate both spaces, resembling the marks on a clock face.

These marks split the galleries into 60 segments or “minutes”. Each minute showcases two garments – one that follows time chronologically and another from a different time period to showcase similarities or differences in form.

“Fashion is indelibly connected to time,” said Andrew Bolton, the Wendy Yu curator in charge of The Costume Institute.

“It not only reflects and represents the spirit of the times, but it also changes and develops with the times, serving as an especially sensitive and accurate timepiece.”

There are 125 fashions in the exhibition with a number sourced from The Costume Insitute’s collection. It includes work from well-known contemporary and historic designers and brands like Virgil Abloh, Azzedine Alaïa, Jonathan Anderson, Iris van Herpen, Karl Lagerfeld and Vivienne Westwood.

First announced last year, The Met’s About Time exhibition is based on French 20th-century philosopher Henri Bergson’s idea of time as la durée, or duration – something which can be measured through images but never perceived as a whole.

The Met closed its main building on Fifth Avenue, as well as its Met Breuer and Met Cloisters locations, in early March in response to the emergence of outbreaks of coronavirus in New York City.

In lieu of the spring opening, the museum created a virtual version of About Time: Fashion and Duration on Youtube.

The annual Costume Institute Benefit, also known as the Met Gala, was due to take place in May 2020 to coincide with the original opening of the exhibition. It was also cancelled due to the pandemic.

The Met’s Costume Institute organises a spring exhibition every year. Last year’s exhibition Camp: Notes on Fashion celebrated the “resurgence of camp”, while the 2018 showcase Heavenly Bodies was themed on religion.

Others have included a retrospective of Comme des Garcons founder Rei Kawakubo, a study of handcraft and machine production and an exploration of China.

About Time will run from 29 October 2020 to 7 February 2021. See Dezeen Events Guide for an up-to-date list of architecture and design events taking place around the world.

The post About Time: Fashion and Duration exhibition at The Met celebrates 150 years of fashion appeared first on Dezeen.