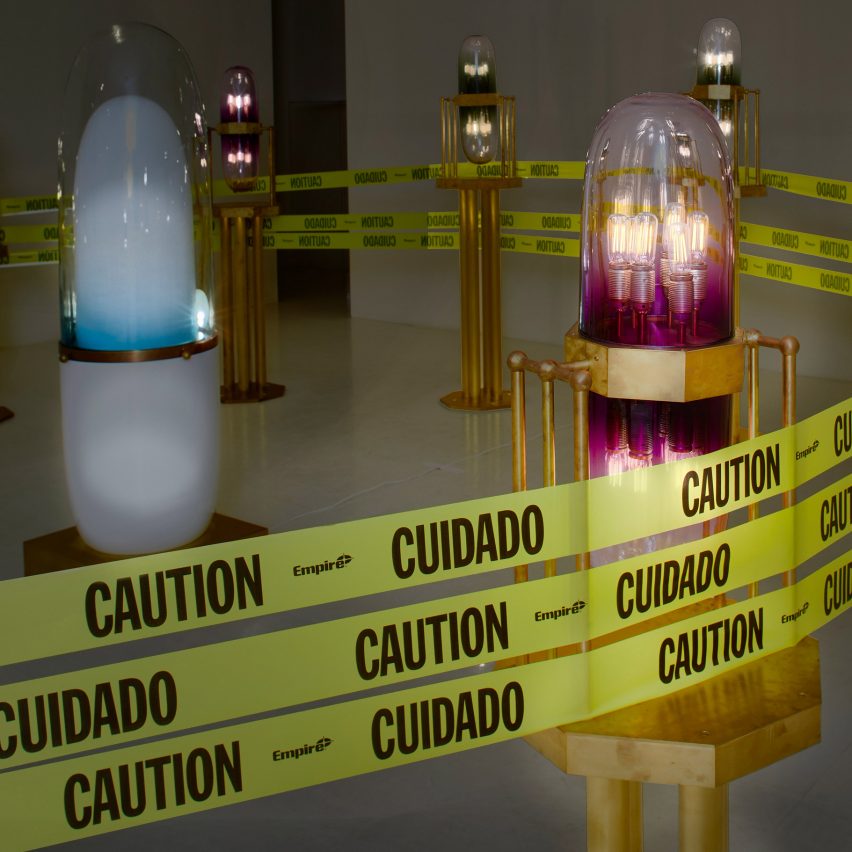 Designer Ini Archibong has altered the design of his Theoracle installation at the Dallas Art Museum and crossed out its title in response to issues of racial injustice and the coronavirus pandemic.

The installation, made from light, sound, crystal, glass and water, originally referenced a kind of ancestral call and response but it has now been silenced. Archibong has also changed the name from Theoracle to Theoracle.

Theoracle was originally created to be interactive. Video edited by Eric Coleman

“Our earthly queries could be posed to Theoracle through our interaction with the sculptures, and the response would come through the changing sounds and lights in the space,” Archibong told Dezeen of the original Theoracle.

“The most potent responses would come via the cymatic pool whose vibrations and sound would come from a sub frequency to create standing patterns on the water’s surface.”

The installation was commissioned by the Dallas Art Museum (DMA) and visitors originally could touch and manipulate it.

Now, the artist has created a muted version of the piece that can no longer be approached as it is wrapped in yellow caution tape.

“We find the same spiritual space but now with lights dimmed, the previously accessible sculptures bound in caution tape, preventing visitors from touching, the main ‘altar’ area cordoned off like a crime scene, the cymatic pool vibrating of its own accord, and the previously hidden synthesizer now exposed as the mechanical controller of Theoracle’s responses,” Archibong said.

The designer, who sees museums as places where people are willing to put aside their conventional viewpoints, reconfigured Theoracle to create an experience that is a response to the “temporal struggles” of the current situation.

“In its original incarnation Theoracle was part of my continuing exploration of the melding of the ancient with the current in an attempt to create and continue dialogue about what it means to engage in the crafting of our own mythology as the children of the African Diaspora,” Archibong said.

“This new intervention for DMA’s ‘To be Determined’ represents my feelings about the current state of affairs in my home country.”

The Switzerland-based American artist looked at the changes from both a practical, a personal and a philosophical standpoint.

As the coronavirus pandemic drastically changed how we interact with each other and with art, he pondered what place physically-interactive art has in a museum setting in a world where we have a legitimate fear of touching things in a public space.

“We have rendered the art untouchable yet still interactive in the sense that we call attention to its interactivity and the guest’s inability to participate,” Archibong explained.

“From a personal and philosophical standpoint, I had to reflect on how it feels to be an artist of African descent during this time of racially-based civil unrest. My first impulse was to ‘pack up my toys and leave’.”

“There was an overwhelming feeling of how unfair it is that we as Black artists are constantly called upon to give the most of ourselves during the times when we are the most drained by how we are being treated by a society that was built on the back of, and for the perpetuation of, our oppression,” the designer said.

He felt it would be more powerful to send a message that stated: “for the time being we are closed for business.”

“Visitors are free to enter the space, take time to reflect, receive the message being delivered by Theoracle, but they are not welcome to participate,” Archibong said.

“If you have ears to listen, then, by all means, enter and hear the message, but Theoracle is no longer here to answer your queries nor is she willing to be touched.”

“I have early memories, and many memories from my young adult life, of caution tape-surrounded scenes with police cars, flashing lights, and carnage,” Archibong said of the yellow tape.

He wanted to use the material as a call out to those who have similar memories and a similar, visceral response to it.

“We learn from a young age that you look beyond that yellow tape at your own risk. Whatever scene is on the other side may never be erased from your memory. Yellow tape means stay back or else,” Archibong said.

Having transformed Theoracle into Theoracle, Archibong is leaving its interpretation and impression up to the visitors.

“I have made the piece. The message is there. I have no hopes. Visitors will take away what they will,” he said.

Archibong’s most recent work includes a proposal for a Pavilion of the Diaspora and a furniture collection informed by the staggered rock formations of The Giant’s Causeway in Northern Ireland.

Photography is by John Smith.

The installation is on view as part of the To Be Determined exhibition at the DMA, which features works from the museum’s collection as well as new pieces from 13 artists. The exhibition is on view from 27 September 2020 – 27 December 2020. See Dezeen Events Guide for an up-to-date list of architecture and design events taking place around the world.

Trypta by Stephen Burks for Luceplan