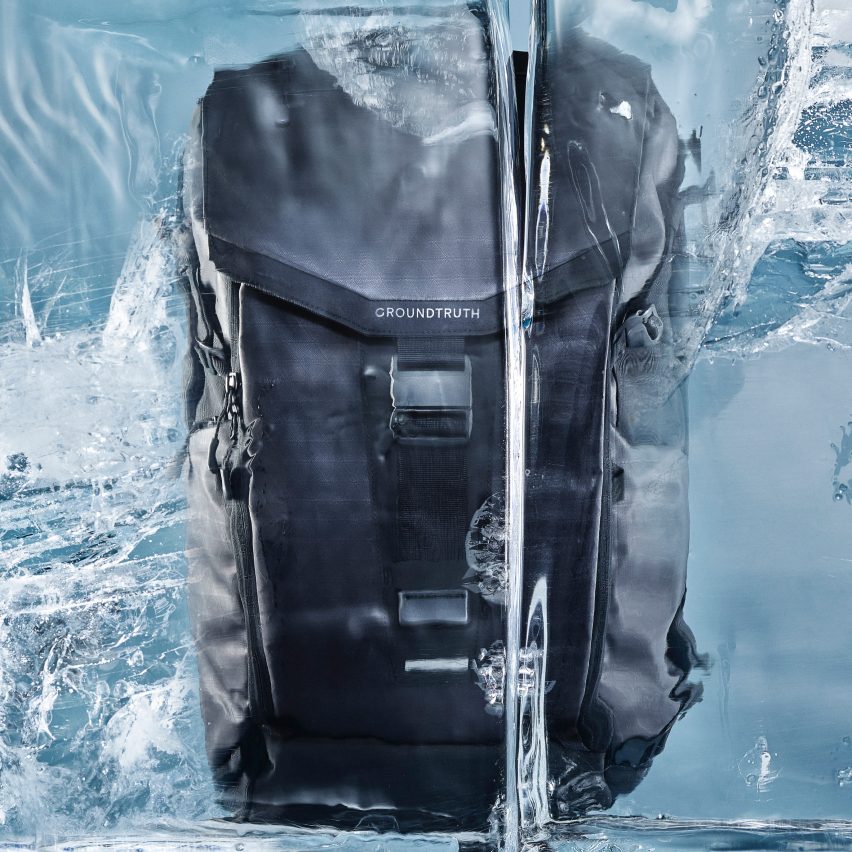 British start-up Groundtruth has used 120 plastic bottles to create the RIKR backpack, which won the public vote in the wearable design category of this year’s Dezeen Awards.

The lightweight and durable bags are made from a fabric called GT-RK-001 that was developed by Groundtruth as a waterproof and high-performance recycled-plastic fabric.

Groundtruth developed the GT-RK-001 textile over the course of 18 months, with the aim of replicating the properties of VX21 – a three-layered fabric that has high tensile strength and abrasion resistance despite being incredibly thin and was originally made for the sails of racing boats.

While VX21 is made from virgin polyethylene terephthalate (PET) combined with nylon and polyester, Groundtruth’s version is made from waste PET sourced from a recycling plant in Jakarta, Indonesia, 20 minutes drive from where the backpacks are manufactured.

The bag is made with a Tripstop weave – Groundtruth’s triangular reinterpretation of a ripstop weave, which generally features a chequered pattern of reinforcement yarns integrated into a fabric to prevent it from tearing or ripping.

“We went through many sampling stages to achieve our final batch,” Nina Scott told Dezeen.

“For strength optimisation, we combined a ballistic weave – a technique of twisting the yarn as it is woven – with a ‘tripstop’ structure.”

Almost every other element of the bag is also made from recycled polyethylene terephthalate (rPET), including the padding and air mesh of the shoulder straps, the fleece lining of the laptop compartment and the zippers.

However, to guarantee a waterproof finish, the bag is currently still covered in a coating made of virgin thermoplastic polyurethane (TPU).

“We are working with a bio-coatings company for our next range, to be launched in autumn 2021,” said Georgina Scott. “It’s vital that bio-coatings are made durable enough to give the waterproofing that we all need.”

The Dezeen Award public-vote winning rucksack was designed for harsh environmental conditions and was first tested by British explorer Robert Swan, during expeditions to both the North and South Pole.

“Rob has worked his entire life on preserving Antarctica and fighting the ongoing effects of climate change,” explained Sophia Scott, who founded Groundtruth alongside her sisters Nina and Georgia.

“We spent two weeks with Rob in Antarctica, sailing around the coastline with daily expeditions to the mainland and continuously putting our prototypes through rigorous tests,” she added.

“Our backpacks survived zodiac excursions [on inflatable rafts], saltwater, freezing blizzards and penguin poo. Through these tests, we enhanced the functionality, refined the design and helped advance our ongoing material developments.”

The RIKR range also includes a tote, laptop and camera bags as well as a cardholder, which is made from offcuts that were created in the process of producing the other products and would otherwise have gone to waste.

The Scott sisters’ ultimate aim is to create a more sustainable way for outdoor wear to achieve its high standards of performance and durability.

“Petroleum-based materials are the most common types within the performance market as they are accessible, affordable and durable,” explained Georgia Scott.

“The advancement of textiles plays a key part in cleaning up this industry and through our trial and testing, we have proven that products created from recycled materials can perform just as well as virgin materials,” she continued.

“The cost is higher, both for us as the producers and therefore also for the customer but the more other companies follow suit, the less expensive these recycled materials will be.”

Earlier this year, American accessories brand Rothy’s released a series of bags made of recycled plastic sourced from beaches and waterways, rather than using plastic that is already within the recycling chain.

The material has also proven popular in footwear design, with Everlane using it to form the laces of its carbon-neutral Tread trainers while Belgian brand Norm spun it into a yarn and used it to 3D knit the upper of its 1L11 shoe.

Studio 10 gets one-up on online shopping in Shenzhen