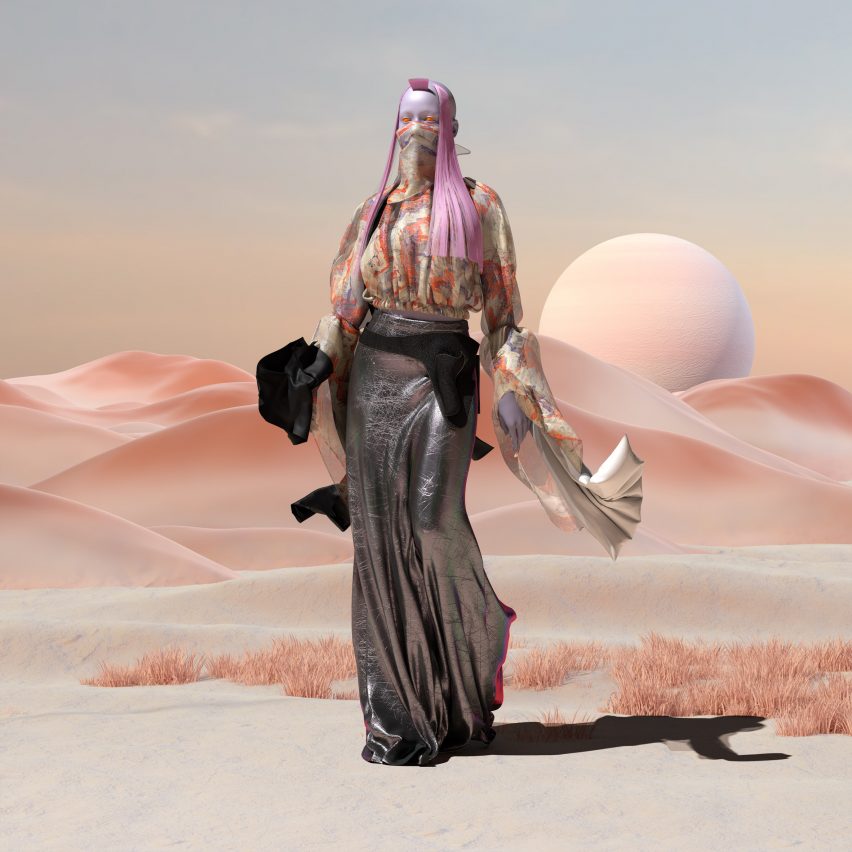 Interest in virtual fashion has exploded during the coronavirus pandemic as people explore ways of dressing their online avatars, according to digital fashion designer Amber Jae Slooten.

“We got huge interest,” said Slooten, co-founder of The Fabricant, a virtual fashion house based in Amsterdam. “I’ve never dressed so many people in my life”.

Slooten said that digital fashion allowed people to act out their fantasies online.

“How do we want to represent ourselves within the virtual space?” she asked. “If we can be anything, will we still want to be ourselves?”

The rising interest in virtual outfits echoes the growing popularity of images depicting fantasy landscapes that “offer a chance to wonder and escape”, according to visualisation artists.

“Given the global situation, the desire for escapism is at an all-time high,” interior designer and creative director Charlotte Taylor told Dezeen earlier this summer.

The Fabricant, which Slooten describes as “the world’s first digital fashion house,” designs garments that only exist digitally.

Created painstakingly with 3D modelling software, the bespoke items are designed to drape and move as if they were real. Customers’ avatars can “wear” the items on social media platforms, gaming environments and virtual worlds.

“We create clothes that only exist in a digital space and never exist in the physical world,” Slooten explained, adding that virtual fashion allows consumers to avoid the waste and pollution associated with traditional fashion.

“We try to create a new fashion narrative for the 21st century because we really believe that we need to look at ourselves in the mirror and see if our vanity really needs to harm the planet in this way.”

Previously, The Fabricant’s garments were made to order. But in April, the studio launched the beta version of a new platform called Leela, which allows people to download a range of ready-to-wear items for their online personas.

“There were about 10,000 people that actually use the app to wear these clothes, which to us was completely crazy,” said Slooten. “People were able to create their own avatars and wear our clothes for the first time.”

Virtual fashion comes naturally to the younger generation, Slooten said, since they are comfortable with the idea of having parallel real-world and online identities.

“I’m a millennial,” she said. “I grew up with digital and physical at the same time. But the generation below us doesn’t even see the difference any more between physical and real.”

“Your digital identities are actually looking different everywhere,” said Slooten. “For instance, your Instagram profile might be very different from your LinkedIn profile.”

The Fabricant was launched in 2018 by Kerry Murphy and Slooten, who studied at Amsterdam Fashion Institute and became the first-ever fashion student to graduate with an entirely digital collection.

“I’m educated as a traditional fashion designer,” she said. “I learned everything at my school; how to sew how to make patterns. [But] I got really sick of all the material that I was using. The physicality of things is something that I never really enjoyed.”

“The physicality made me sick, because of all the materials that we were wasting,” she explained. “I felt like a huge responsibility for the future of the industry, which I which is why I started questioning physicality altogether.”

“And then after I graduated, there were absolutely no jobs in that subject,” Slooten added. “And it made me realise that I needed to create it.”

The Fabricant’s first virtual collection was launched with a digital show with virtual scenery and models, pioneering a format that has now been adopted by many brands due to restrictions imposed by the pandemic.

Last year, the Fabricant made history when a virtual dress was auctioned for the first time, selling for $9,500.

In future, Slooten believes that real-world fashion will become increasingly technological and sustainable, featuring smart materials that act as a second skin and are able to monitor the body.

“I feel like the future lies in materials that are smart and that are able to grow with us or even grow on us,” Slooten explained, adding that the physical world will allow people to exhibit “a more sober expression of who we are”.

Parallel to this, virtual fashion will offer people ways of being more expressive.

“And then within the digital world, we can go completely crazy. We can wear a dress made of water or have lights everywhere and change your textile according to your mood.”

Eventually, technology could make the digital and the physical worlds indistinguishable, Slooten believes, with garments offering haptic feedback so that virtual reality becomes similar to the real world.

“And this opens up even a more philosophical question,” Slooten adds. “Is it even a reality? Because if the virtual world feels like, looks like, and behaves like reality, how do we know it’s virtual?”